The Bold and the Beautiful Spoilers: Katie Demands Marriage Prenup With Bill – Imposes Penalties For Cheating? 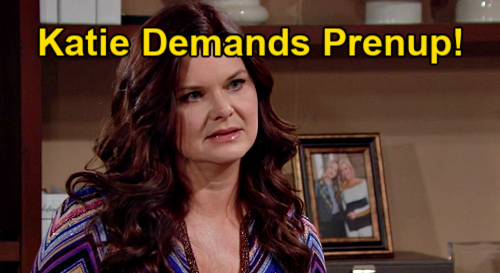 The Bold and the Beautiful (B&B) spoilers tease that Katie Logan (Heather Tom) is going to have some big decisions to make. As B&B viewers know, Katie has been on the receiving end of Bill Spencer’s (Don Diamont) pleas for a while now.

Bill desperately wants Katie back, and he wants to put his family back with Katie and Will Spencer (Finnegan George) more than anything.

Well, during the week of March 1-5, B&B spoilers say that Bill will seize an opportunity to get Katie back, which certainly sounds like Katie might relent and allow Bill back into her life.

Brooke Forrester (Katherine Kelly Lang) and Donna Logan (Jennifer Gareis) recently helped Bill in his quest for a reconciliation by talking to Katie and urging her to take Bill back.

It seems like forgiveness and redemption will be a theme with the Logan sisters this week, as B&B spoilers also say that Flo Fulton (Katrina Bowden) will be welcomed into the fold and forgiven for her role in the Beth Spencer (River Davidson and Madeline Valdez) debacle.

Perhaps after Katie fully forgives Flo, she’ll start feeling like she finally ready to offer forgiveness to Bill, too.

After all, what Bill did by kissing Brooke was a betrayal, but it was nothing like posing as Beth’s birth mother and being complicit in the scheme to adopt her to Steffy Forrester (Jacqueline MacInnes Wood).

The good news for Bill is that it looks like Katie will decide that she’s ready to put her family back together. That should absolutely thrill Bill.

But Katie may have some strict terms that she wants Bill to adhere to when they get back together. Perhaps Katie will insist on marriage this time around, to solidify things a little bit better.

Katie could even insist on a prenup in which Bill actually gets penalized financially if he cheats on Katie during the marriage.

It certainly wouldn’t be the first time that a woman requested a prenup for such purposes. The prenup could be written so that Bill could have to fork over a lot of money and part of his business if he cheats or kisses someone else ever again.

And Katie would probably think that Bill should be happy to agree – that is, if he’s being sincere in his promise never to stray again.

We’ll see what happens here, but we’d be all for Katie getting a lucrative sum if Bill cheats again – and of course, the prenup should spell out that this is Bill’s last and final chance to do right by Katie.

Bill’s quite the dealmaker, so you’d think he might appreciate having his expected behavior and the consequences of breaking the marital agreement spelled out!

Do you think that Katie will insist on a no-cheating prenup when she marries Bill again? Stick with B&B and with CDL for all your Bold and the Beautiful spoilers, daily episode recaps, and news.