The Bold and the Beautiful Spoilers: Liam Blasts Finn for Breaking Steffy’s Trust, Putting Kelly at Risk with Sheila? 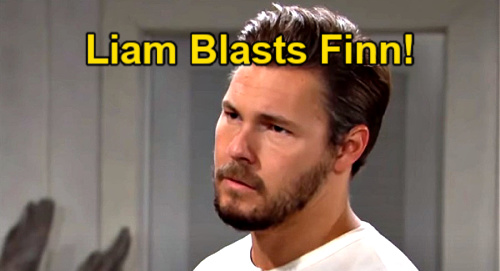 B&B fans know Liam and Hope Spencer (Annika Noelle) discussed Sheila in the aftermath of the wedding reception mayhem. Hope and Liam agreed that they had to protect all the kids from Sheila.

They’re obviously concerned about more than just Hayes Forrester Finnegan since Sheila is so unpredictable.

It’s true that Hayes is Sheila’s priority, but Kelly could also be in jeopardy. After all, Finn has embraced that little girl as if she were his own child.

Liam will always be Kelly’s father, but Finn is an excellent stepdad who adores Kelly – and Sheila just might latch onto Kelly as a new granddaughter.

After Sheila blackmails Jack Finnegan (Ted King) during the week of August 23-27, she’ll be able to hold Hayes and bond with him.

That could leave Sheila craving even more grandchildren and convince her to get closer to Kelly, too.

Regardless, Steffy will lash out when she realizes Finn’s broken his promise by maintaining contact with Sheila.

The fact that Finn could let Sheila anywhere near Hayes will be a real problem for Steffy.

Liam might get updates on all the drama and decide to give Finn a piece of his mind as well.

Liam may object to Finn letting Sheila into his home – the same home where Kelly spends a good chunk of her time.

Liam is also protective of Steffy, so it’s easy to imagine him chewing her new husband out over the disrespect.

Finn might argue that Liam has no right to judge considering how he hurt Steffy in the past, but Liam should be more concerned with what’s happening in the present.

Liam may push Finn to keep his crazy birth mom at a distance – or else!

It seems like there’s more to explore when it comes to Liam and Finn’s rivalry.

B&B let Steffy’s former flame start getting along with Finn, but maybe it’s time to reignite the conflict. The show has the perfect opportunity since Liam’s bound to be angry with Finn over his upcoming moves.

The Bold and the Beautiful spoilers say Liam will have to decide how to handle the situation and make sure Kelly stays protected along with the other children.

CDL’s the place to be for fantastic Bold and the Beautiful spoilers, news and updates, so stop by often.