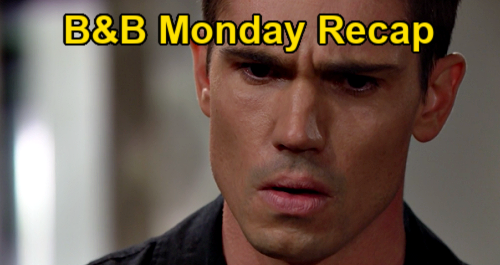 Liam said woefully that he was sorry, but Hope yelled and said the man she married was loyal and respectful.

Hope reiterated that she never would have kissed any other man.

Liam said that he believed his own eyes and that he was devastated that night. “Please, do not let me have destroyed our life together,” Liam begged through tears, noting that he wanted to explain what happened, not justify it.

Liam went on, saying that he spiraled and needed an anchor. “And you went to Steffy,” Hope fumed.

Liam described how he and Steffy started drinking, and he told Hope that he’d spend the rest of his life making this up to her. “I will never betray our vows again – I need you and our life together. Crying, Liam begged Hope to forgive him, but Hope just looked away in disgust.

Meanwhile, over at the cliff house, John “Finn” Finnegan (Tanner Novlan) went on about how good his life was with Steffy in it, and he gushed about how he wanted Steffy by his side always.

Finn was all earnest and happy, but he got worried when Steffy seemed preoccupied about something. Steffy said that she loved Finn, and that she loved how accepting he was of her.

Finn then asked if everything was ok, and he said that there was nothing that Steffy couldn’t tell him. Steffy got agitated and started rambling that something had happened, and that she loved Finn so much. Finally, Steffy blurted out that she and Liam kissed. Finn looked upset as he tried to comprehend this.

Finn said that he didn’t like it, and that Liam needed to stop putting Steffy in the middle of his personal life. “It’s disrespectful to us and to our relationship,” Finn said, but he also said that he could live with a kiss.

Steffy looked mortified as Finn asked if that was all that happened. “Liam spent the night – we slept together,” Steffy blurted. Finn looked upset.

At Forrester Creations, Zende Forrester Dominguez (Delon de Metz) and Paris Buckingham (Kiara Barnes) continued their talk backstage. Paris thanked Zende for stopping her from leaving, and Zende said that he wasn’t about to lose Paris.

Zende went on, making Paris promise that she was going to take the Forrester Foundation position.

Zoe promised, and she said that she wanted to work at Forrester more than anything. Zende talked up the company, and Paris got pensive, saying that she was thinking about how Zoe Buckingham (Kiara Barnes) would react to the news.

Zende said that he’d help with that, and that he couldn’t wait to see Paris at work every day.

In the Forrester Creations design office, Carter Walton (Lawrence Saint-Victor) relayed to Zoe that Zende ran out of the office when he heard that Paris had turned down the job offer. Carter said that Zende wasn’t going to stop until Paris changed her mind, and Zoe didn’t look happy about that.

Carter then changed the subject, saying that he didn’t want to wait any longer on marrying Zoe. “I don’t want you to be my fiancé anymore,” Carter teased, saying that he wanted to set a wedding date.

Zoe countered that a wedding took time to plan, and Carter again said that he wanted to marry her soon. Zoe looked preoccupied about that.

That was a great episode of B&B, and you won’t want to miss tomorrow’s episode, so stay tuned to the CBS soap! Here at CDL, we’ll keep you abreast on all the latest Bold and the Beautiful spoilers and news.