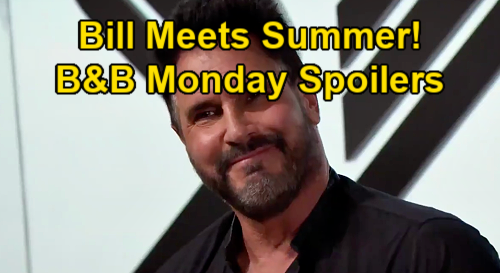 The Bold and the Beautiful spoilers for Monday, January 18, tease that the argument between Hope Spencer (Annika Noelle) and Steffy Forrester (Jacqueline MacInnes Wood) at Forrester Creations will rage on. As B&B viewers know, Hope has just accused Steffy of being a home wrecker and she’s asked point blank who the father of Steffy’s baby is.

Of course, Steffy has no idea who the father is at this point, but Hope will think that Steffy must have some inkling of who the father might be, given the timing of the pregnancy.

Chances are, Steffy will continue to say that she wants John “Finn” Finnegan (Tanner Novlan) to be the father and that she wants a future with him. We’ll see if Hope buys that, since she seems to be under the impression that Steffy wants Liam Spencer (Scott Clifton) deep down.

Meanwhile, it seems that Liam and Finn will continue their heated exchange over at the cliff house. Finn has just laid down the law to Liam, saying that if the baby turns out to be his, then life as Liam knows it is going to change.

Finn wants to be clear with Liam that he’s not going to stand for Liam making himself at home at Steffy’s anymore.

Of course, Liam will probably try to fight back, saying that it’s actually Steffy’s decision about who she spends time with. But according to B&B spoilers, Finn’s not going to accept any form of excuse or justification that comes out of Liam’s mouth.

The days of Finn trusting Liam and being all easygoing about the extended family dynamic are clearly done.

Meanwhile, on the new episode of B&B on Monday, January 18, Wyatt Spencer (Darin Brooks) will bring Y&R’s Summer Newman (Hunter King) over to Spencer Publications for a visit.

As viewers of Y&R already know, Summer runs a business called Jabot Collective (JCV) back in Genoa City, Wisconsin, and she’d like for Spencer Publications to promote the brand.

Wyatt has promised to foster a meeting between his dad Bill Spencer (Don Diamont) and Summer to discuss the collaboration, so it looks like B&B viewers will see Summer meet Bill for the first time on Monday’s episode. The Bold and the Beautiful spoilers say that Wyatt will introduce Bill to Summer as he’s working out at the office.

Summer, Wyatt, and Bill should discuss plenty of business, but Summer will also have an ulterior motive in meeting with the Spencers – she’ll hope to get some dirt on Sally Spectra (Courtney Hope), who recently moved to Genoa City after her disastrous time in Los Angeles.

As B&B viewers will remember, Sally faked a terminal illness to try to hold onto Wyatt.

We’ll see if Summer makes any headway in getting dirt on Sally on Monday’s episode. There’s plenty of dirt to be dug up on Sally, that’s for sure, and ongoing

B&B spoilers for later in the week indicate that it will be Flo Fulton (Katrina Bowden) who ultimately spills the beans about Sally. It should be sweet revenge for Flo!

Monday’s episode is going to be great, so stay tuned to the CBS soap! We’ll keep you up to speed on all the latest Bold and the Beautiful spoilers, updates, and news throughout the weekend. You can count on CDL for all your soap needs!