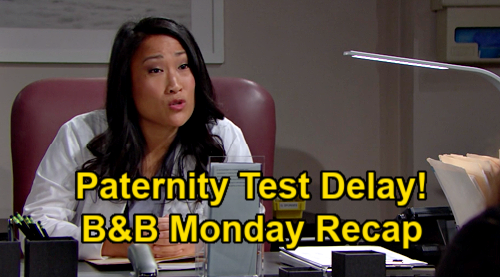 The Bold and the Beautiful spoilers recap for Monday, January 25, reveal that Steffy Forrester (Jacqueline MacInnes Wood) told Dr. Campbell (Tina Huang) at the hospital that she needed a paternity test done right away.

Steffy said that the situation was stressful, and that one of two men could be the father of her baby, and that she hoped it was John “Finn” Finnegan (Tanner Novlan).

Unfortunately, Dr. Campbell said that it was too soon to have a paternity test done, and that Steffy would have to wait until after the 8th week of pregnancy.

Steffy was upset, and Dr. Campbell said that they’d get a test scheduled for when the time was right, and that Steffy needed to stay calm and not stress about this.

Hope and Liam greeted each other awkwardly, and Hope disclosed that Thomas Forrester (Matthew Atkinson) had overheard them talking about the affair and Steffy’s pregnancy earlier. That upset Liam, who figured that Thomas probably said, “I told you so.”

Hope said that it was the exact opposite, and that Thomas had urged Hope to forgive Liam. That surprised Liam, and he wondered if Thomas’ words had an effect on Hope.

Hope said that this would take time – lots of time. Liam then got a text from Steffy saying that she wanted to see them both asap.

At the cliff house, Steffy told Finn that “the four of us” need to discuss some things. Finn said that he wasn’t ready for a big sit down, just as Hope and Liam walked in the door.

Steffy said that she needed to stop stressing in order to protect her child. Steffy turned to Finn and said that she was ashamed that she betrayed him, but that there was nothing ugly about this baby. “I will love it fiercely, and I really hope that you’re the father,” Steffy said.

Steffy also told Hope that she never meant to hurt Hope’s family with Liam, and she said that while they were all dying for an answer, that it wasn’t meant to be today. “We will have to wait a little longer,” Steffy said. “We’ll do a paternity test and find out who’s the father.”

Carter gushed about how they had a wedding to plan and that they should pick a date tonight. Zoe agreed.

Over in the CEO office, Paris Buckingham (Diamond White) and Zende talked. Turns out, it was Paris’ first day on the job, and she said that everyone had given her a warm welcome. “Everyone but Zoe?” Zende asked.

Paris mentioned how protective Zoe was of her professional and personal relationships, and then she needed to make something clear with Zende.

“I’ve been enjoying getting to know you, but I’m not one to blur lines when it comes to work,” Paris said, going on to say that there could be no flirting or playing games on work time.

Just then, Donna arrived, saying that Zoe wanted to see Zende backstage. Zende took off, and Donna gushed about Zende to Paris.

Donna then said that Zoe was lucky too, and she went on about how handsome and successful Carter was, just as Carter walked up behind Donna. Donna got flustered and took off, while Carter smiled big.

Backstage, Zende found Zoe, who said that she had made a big decision without knowing all the facts. “I can’t stop wondering about us,” Zoe said. “Don’t go there,” Zende insisted. “I’m not sure what you think you know, but it doesn’t change what happened that night. You’re engaged.”

Zoe insisted that she wouldn’t be engaged if things had gone the way they should have gone. “I got your text. It just came through today,” Zoe said.

That was a great episode of B&B, and there’s plenty coming tomorrow, so stick with the show! We’ll be sure to keep you up to speed on the latest Bold and the Beautiful spoilers and news as well.