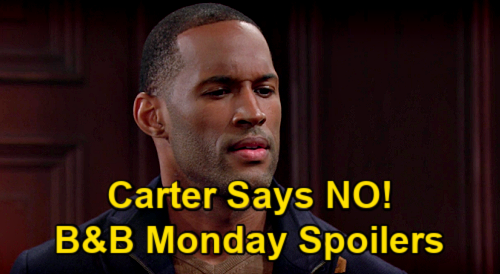 The Bold and the Beautiful spoilers for Monday, March 8, tease that Zoe Buckingham (Kiara Barnes) will anxiously await an answer from Carter Walton (Lawrence Saint-Victor).

As B&B viewers know, Zoe has just implored Carter not to give up on them, and she gave a big spiel about how she was sure now that she wanted to be with him. Zoe’s speech was certainly impassioned, and Carter seemed a bit moved.

Well, unfortunately, it appears that Carter may not give Zoe the answer she’s wanting to hear, since B&B spoilers for Monday’s episode say that a once-promising relationship will come to an end.

It looks like Carter may turn Zoe down flat, telling her that he just can’t get past the fact that she went behind his back and openly flirted with Zende Forrester Dominguez (Delon de Metz).

Really, given that Carter wants to build a life with someone who he can trust with his heart, it would seem that Zoe’s just not the one for him. Sure, Zoe may be sincere now about her love and desire to commit to Carter, but Carter will always have Zoe’s betrayal on his mind if they go forward together.

It looks like the trust will be gone, and Carter will probably pull the plug on the relationship once and for all.

Ongoing B&B spoilers for later during the week of March 8-12 indicate that Zoe is going to lash out at Paris Buckingham (Diamond White) in the coming days, which would indicate that Zoe will be looking for someone to blame for her relationship falling apart.

Of course, Zoe really has no one to blame but herself for what’s happened, but given that she’ll be verbally abusing Paris, that would indicate that she’ll be quite unhappy about the state of her life.

Meanwhile, on the new episode of B&B on Monday, March 8, Paris will have a present to give to Zende. As B&B viewers know, Zende surprised Paris with a little getaway at the Forrester mansion. Zende hired a caterer for the evening, and he presented Paris with a beautiful gown that he made just for her.

Paris was enchanted by the gesture, and she absolutely loved the gown.

Well, according to B&B spoilers, Paris will have something up her sleeve for Zende as as well. B&B viewers will remember from the holiday episodes that Paris sings, and it looks like she’ll have a special song to perform for Zende.

Perhaps it will be a song that Paris wrote just for Zende. Whatever the case, it will be a special moment as Paris serenades Zende, who will surely love the private performance.

Monday’s episode is going to be terrific, so be sure to tune in! We’ll keep you informed with updates throughout the weekend. Stick with the CBS soap and don’t forget to check CDL regularly for the latest Bold and the Beautiful spoilers, daily episode recaps, and news.