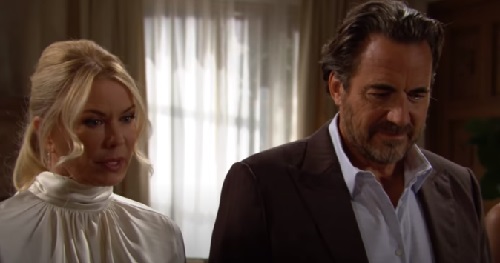 Ridge will find a reason to visit the cabin in Monday’s B&B episode, but he won’t find Hope or Liam Spencer (Scott Clifton) like he expects. Instead, Deacon will be there by himself – and Ridge will absolutely lose it!

Ridge will hit the roof and wonder what the heck Deacon thinks he’s doing, so that’ll launch a major showdown before Hope shows up with Brooke. It’ll probably just be a case of Hope leaving Deacon at the cabin while she brings her mom over, but Ridge won’t want to hear any excuses.

The Bold and the Beautiful spoilers say Hope will rush to Deacon’s defense – and to Ridge’s dismay, Brooke will back her daughter up. Since Ridge will be dealing with so much anger, he’ll eventually decide he’d better leave before he takes things too far.

There’s no predicting what Ridge might say or do once he’s pushed to his limit, so he’ll make the smart choice to cool off elsewhere. Of course, Hope will be frustrated over Ridge’s refusal to let her open her heart to Deacon, but he won’t be the only one on Monday’s show.

Liam and Steffy Forrester (Jacqueline MacInnes Wood) will have a troubling talk about the road Hope’s headed down if she keeps this up. It’s a tricky situation for Liam since he doesn’t want to be a controlling husband, but he also feels the need to step up and protect his children.

Steffy will be right there with Liam on putting the kids first, so they’ll have a strategy session and try to thwart Hope’s efforts to bond with Deacon. Hope’s going to eavesdrop on this discussion by the time Tuesday rolls around, so we’ll see if Monday’s cliffhanger brings the first signs of that drama.

We’ll offer updates as other B&B news becomes available. The Bold and the Beautiful spoilers say Hope will put up a fierce fight for her father, so anyone who tries to stand in the way of their connection will face her full wrath. CDL’s the place to be for thrilling soap spoilers, updates and news, so make us your go-to source.