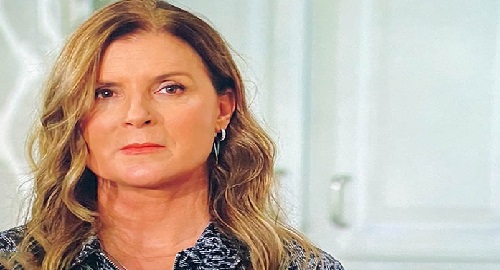 Justin just busted Carter and Quinn in the bedroom, but he’s wrong about this being another affair. It’s obviously not how it looks since Eric Forrester (John McCook) approved this little rendezvous and others like it. Eric wants Quinn to be fulfilled in every way, but he intended to keep this steamy arrangement private.

Of course, that won’t be possible now that Justin has the wrong idea. Justin will be smug as he taunts Quinn and Carter over their imminent exposure. They’ll be in panic mode as they try to convince Justin to keep this news under wraps, but Justin will insist on reporting back to the boss!

Carter and Quinn will find out Ridge Forrester (Thorsten Kaye) was behind Justin’s spy games, so they won’t be happy about that. However, Quinn and Carter will be more concerned about the humiliation this revelation could bring for Eric. They won’t want Eric to get hurt, so that’ll be Carter and Quinn’s main concern.

As for Steffy, her priority will be getting Sheila to leave and never come back. Unfortunately, Sheila didn’t listen before and will have no intention of listening now either. Sheila will reiterate that she wants a relationship with John “Finn” Finnegan (Tanner Novlan) and Hayes Forrester Finnegan (Piper Harriot), but Steffy will remain firmly against it.

B&B spoilers say Steffy will once again make it clear that Hayes is off-limits – and she won’t think Finn wants anything to do with Sheila either. Naturally, Sheila will argue it’s Steffy who’s making all the decisions here. She’ll think Steffy needs to back off and let Finn decide for himself whether he wants his birth mom in his life.

Steffy may argue that Finn understands who Sheila truly is now and wouldn’t want her in his life regardless. Sheila will disagree as this confrontation escalates to a scary new level. It won’t be long until Sheila delivers a fierce warning and suggests she’s done letting Steffy call the shots!