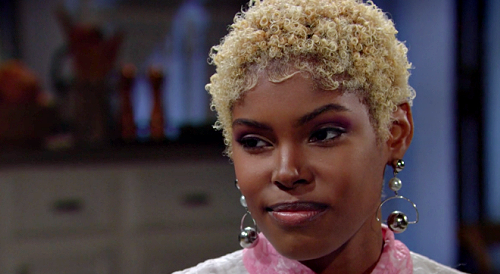 The Bold and the Beautiful (B&B) spoilers tease that Paris Buckingham (Diamond White) will realize she’s overstaying her welcome, so John “Finn” Finnegan (Tanner Novlan) and Steffy Forrester’s (Jacqueline MacInnes Wood) houseguest must go. Paris will realize a big living arrangement decision has to be made, but it may not be an easy one.

During the week of September 20-24, B&B spoilers say Paris will come to a major realization. She’ll face an epiphany of sorts regarding her time at the cliff house, so it sounds like Paris will realize she needs to find somewhere else to live.

This was never meant to be a permanent solution, though Paris is certainly grateful for Steffy and Finn’s hospitality.

However, Paris will likely have multiple reasons for making this move-out choice. One of them should simply be that it’s the right call after living this long in the newlyweds’ home.

Steffy and Finn were nice enough to suggest Paris could stay there as long as she needed to, but this arrangement can’t last forever.

Paris will also know Finn and Steffy deserve their privacy without her lurking around every turn.

When you throw in all the fantasizing Paris will be doing about Finn, she should determine that nothing about this situation feels right anymore.

All of this should build to Paris’ epiphany and set the stage for her announcement that she’s moving out.

Of course, Steffy and Finn might insist that’s not necessary if Paris isn’t ready. They might even offer up the guest house assuming that the air conditioning has been fixed.

Nevertheless, Zende Forrester Dominguez (Delon de Metz) also brought up the idea of Paris potentially moving in with him.

Paris might decide to take Zende up on the offer, but that could end in disaster if she can’t get her mind off Finn.

Living together is a huge step – one that Zende and Paris may find they’re not ready to take once they actually take it.

Whatever the case, Paris will continue to develop a bit of a Finn obsession.

That’ll be difficult for Paris to shake no matter where she lives next! As other B&B news comes in, we’ll pass along updates.

The Bold and the Beautiful spoilers say Paris will apparently make the right decision when it comes to moving out of the cliff house, but that doesn’t mean she’ll be able to get Finn out of her head.

CDL will have other great Bold and the Beautiful spoilers, updates and news, so check back regularly.