The Bold and the Beautiful Spoilers: Quinn Rages Over Hypocrite Brooke & Deacon Reunion 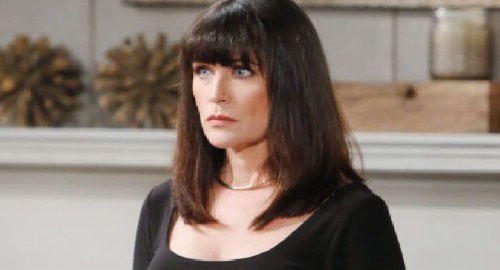 The Bold and the Beautiful (B&B) spoilers tease that Quinn Forrester (Rena Sofer) may rage over Brooke Forrester (Katherine Kelly Lang) and Deacon Sharpe’s (Sean Kanan) seemingly inevitable reunion. Will Quinn call out her rival’s hypocrisy for choosing a criminal?

B&B fans spent months listening to Brooke go on and on about how Quinn was incapable of change. Brooke has been trying to steer Eric Forrester (John McCook) in another romantic direction because she’s unwilling to forgive Quinn’s mistakes.

It’s clear that Brooke doesn’t trust Quinn and thinks she’s just going to hurt Eric again. Meanwhile, Deacon – who landed in prison for taking shots at Quinn – is someone Brooke sees potential in. Brooke is softening toward Deacon and is considering the idea that he’s truly turned his life around.

Ridge Forrester (Thorsten Kaye) will keep trying to convince Brooke that it’s a mistake to embrace Deacon, but Brooke will insist on standing by Hope Spencer (Annika Noelle). That could lead to a marriage-shattering deadlock for Brooke and Ridge in the coming episodes.

All signs point to a separation, which could turn into a divorce sooner or later. Of course, that could open the door to a true reunion for Deacon and Brooke. Can you imagine the next time Brooke has Deacon on her arm for some party at the Forrester mansion?! Quinn is sure to have a major meltdown if that plays out.

Deacon sought deadly revenge on Quinn before he was locked up, so that’ll be reason number one for outrage. Reason number two is that Brooke has absolutely no right to judge Quinn’s relationship with Eric if she’s going to give Deacon a pass.

Brooke may argue that it’s different somehow and will probably find a way to slam Quinn anyway. We all know Brooke has a habit of thinking her opinion is the only one that matters!

However, Quinn isn’t going to approve if Brooke reunites with Deacon and expects everyone to accept it. This could bring a good opportunity for Quinn to lash out over Brooke’s hypocrisy and try to put her rival in her place.

The writing’s on the wall for a Brooke and Deacon reunion, so it’s time to start thinking about the fallout that’ll come from that. Will Quinn’s fury erupt? We’ll deliver updates as other B&B news emerges.