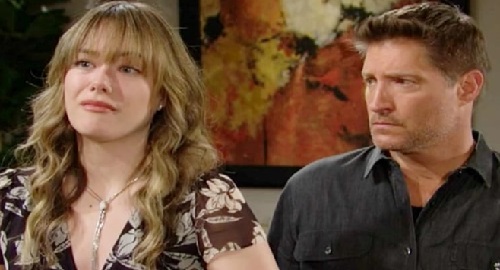 The Bold and the Beautiful (B&B) spoilers recap for Tuesday, November 30, reveals that Liam Spencer (Scott Clifton) wanted Hurricane Deacon Sharpe (Sean Kanan) out of LA, so his refusal to listen caused Hope Spencer (Annika Noelle) to walk out on her husband at the office. Here’s how all the B&B action played out.

At the cabin, Ridge Forrester (Thorsten Kaye) warned that letting Deacon stick around would mean setting Hope up for crushing disappointment. Ridge pushed Brooke Forrester (Katherine Kelly Lang) to tell Deacon to get out and eventually tried to drag him out himself, but Brooke said this wasn’t helping and warned Ridge to leave Deacon alone.

Deacon argued that Ridge was the one driving a wedge here, but Ridge rehashed the pain Deacon caused by convincing Brooke to betray Bridget Forrester (Ashley Jones). Ridge felt it was the worst betrayal of Brooke’s life and questioned if she really wanted this clown around as a reminder.

Brooke was unwilling to alienate Hope, especially since Hope threatened to move away with Liam and the kids. Brooke wanted the grandchildren around and hoped to preserve her bond with her daughter, so she refused to go along with Ridge’s wishes.

Next, Brooke urged Ridge to consider the idea that maybe Hope was right – that Deacon really had changed. Ridge obviously didn’t buy that for a second and decided to leave before he said something he might regret.

At Forrester Creations, Hope was outraged over Steffy Forrester (Jacqueline MacInnes Wood) fueling Liam’s concerns about Deacon. Since Steffy asked Hope not to interfere in the Sheila Carter (Kimberlin Brown) situation, Hope expected Steffy to respect boundaries when it came to Deacon. She didn’t appreciate Steffy interfering in her marriage, but Steffy argued that wasn’t what she was doing.

Liam backed Steffy up and insisted they were all just concerned. He felt the best thing for everyone would be for Deacon to leave town and not come back. Liam reminded Hope that the kids were involved, but she didn’t want them to see the world as some scary, evil place. Hope wanted to raise compassionate children who believed people were capable of change.

Steffy acted like she was in the same marriage tension boat with Sheila and John “Finn” Finnegan (Tanner Novlan), but Hope didn’t approve of the comparison. She argued that Deacon was nothing like Sheila, but Steffy insisted the tension was the same and thought “Lope” could get through it if Hope would try being objective.

Steffy wanted Hope to ask herself if it was really worth it. She worried Deacon could go back to his old ways and start asking for money or drinking again. Liam agreed this rehabilitation time would be tricky for Deacon, but that’s exactly why Hope wanted to provide stability and be there for her dad.

Hope didn’t like Liam acting like Deacon was a monster, but he thought Deacon was more like a hurricane. Liam felt it was about getting out of the way, not punishment or retribution. Hope felt like Liam didn’t trust her or her judgment, which she found both hurtful and disappointing. She walked out on Liam, who grew frustrated since they normally talk things out.

Soon after, Ridge appeared with updates on Brooke defending Deacon at the cabin. He was starting to wonder if Deacon was solely there to reconnect with Hope – implying that Deacon wanted to reconnect with Brooke, too. Ridge thought Deacon was getting in Brooke’s head and warned this wouldn’t end well.

Back at the cabin, Deacon thanked Brooke for sticking up for him and hated all the marriage tension he was causing. He gushed over Brooke raising Hope to be the most forgiving person he’d ever met – and Hope arrived in time to add that Brooke taught her not to give up on people.

After Hope found out Brooke defended Deacon and was considering the possibility that he’d changed, she was so grateful to have Brooke’s support. Hope insisted she needed it – and so did her dad. As Brooke hugged Hope, she exchanged a smile with Deacon.