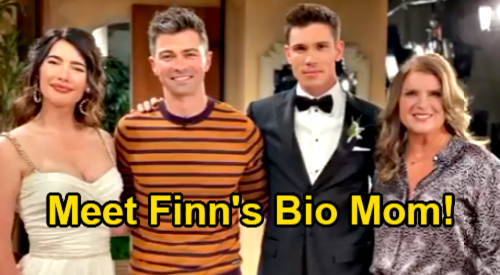 The Bold and the Beautiful spoilers reveal that CDL reported back in May 2021 that Kimberlin Brown was seen on the B&B set. At that time, we predicted that Sheila Carter could be John “Finn” Finnegan’s (Tanner Novlan) mother. New details confirm that the mystery wedding crasher is Sheila and Jack Finnegan (Ted King) will have some explaining to do.

B&B spoilers reveal that on April 30, Brown was spotted on the CBS soap set. Even though it was speculated that Sheila was returning, an insider claimed to Soap Opera Digest that the actress wasn’t there to work but for another reason.

It sounded like a cover story and now it’s clear why TPTB wanted to keep Sheila’s comeback under wraps.

It was uploaded to ET’s Instagram Stories with the actors’ names tagged. Text was added to the bottom of the post confirming the characters are crashing weddings.The Bold and the Beautiful Spoilers: Sheila Carter Is Finn’s Mother, Crashes Steffy’s Wedding – Kimberlin Brown Returns 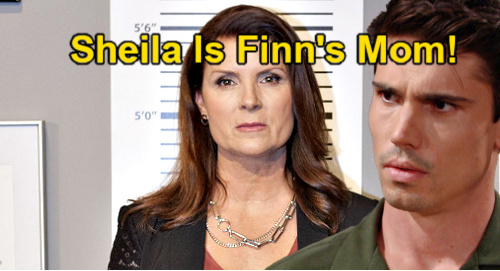 The Bold and the Beautiful spoilers reveal that Finn and Steffy’s wedding will begin on August 5. That same day, a mystery woman arrives at Eric Forrester’s (John McCook) home.

It is teased that the wedding continues, so Sheila behaves herself long enough for “SINN” to be pronounced husband and wife. However, it is also stated that everyone at the wedding will be tense with the uninvited guest.

It is also confirmed that Finn is shocked when he gets a disclosure, which must be Jack admitting the truth about Sheila being Finn’s biological mother.

The Bold And The Beautiful Spoilers: Jack Finnegan’s Disclosure

It’s clear why Jack panicked over the wedding announcement being posted publicly. What we need to know is how Jack and Sheila are connected as this was not the typical adoption story.

Does Li Finnegan (Naomi Matsuda) know about Sheila or is she in the dark just like Finn? A lot will be unveiled as the week continues.

Even though some fans are suggesting Jack and Sheila had an affair, there seems to be a much more dramatic backstory.

Sheila might have blackmailed Jack into sleeping with her, which implies that Finn’s dad might have plenty of other secrets just waiting to be uncovered.

When he learned that she was pregnant, he took steps to make sure he was in the hospital at the time of labor.

Jack’s wife is a surgeon, so his presence wouldn’t be suspicious. Now, was this a single birth and Jack kidnapped the newborn?

Or was one of Sheila’s previous deliveries actually twins with one baby going home with Jack and Li?

We will find out soon enough but in the meantime, tell us what you think is the real story and how Steffy and Finn’s marriage will be affected.