The Bold and the Beautiful Spoilers: Steffy And Hope Rivalry Back On After Shocking Liam Discovery 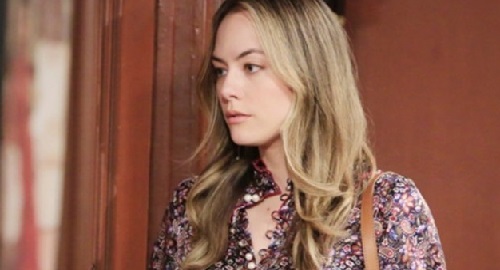 The Bold and the Beautiful (B&B) spoilers tease that Steffy Forrester’s (Jacqueline MacInnes Wood) marriage interference will appall Hope Spencer (Annika Noelle), so their rivalry will be back on after a shocking Liam Spencer (Scott Clifton) discovery.

B&B viewers know there’s one thing Steffy and Liam definitely agree on. They don’t want Sheila Carter (Kimberlin Brown) or Deacon Sharpe (Sean Kanan) anywhere near their blended family, so they’ll do whatever it takes to make sure their criminal in-laws stay away.

However, Liam and Steffy will take a moment to focus on the Deacon side of things during the week of November 29-December 3. Steffy will be frustrated over Hope feeling so drawn to her father and buying his “changed man” act. She’ll feel like the safety of the children has to come before Hope’s desire to have Deacon in her life.

Liam will agree the kids have to be the priority, but he’ll no doubt worry about the conflict he could stir up in his marriage. Since Hope has forgiven a lot, it won’t be as easy for Liam to just dismiss her feelings.

Even so, Liam will continue to believe shutting Deacon out is the right thing to do. He’ll have Steffy there to further fuel his concerns about Deacon and convince him this is the best decision he could make.

The Bold and the Beautiful spoilers say Liam and Steffy will discuss their worries about Hope, Brooke Forrester (Katherine Kelly Lang) and all the Logan women’s negative qualities. A stunned Hope will overhear enough to know the Logan women are being slammed – and she won’t approve of Steffy urging Liam to shut Deacon out either.

This will lead to Hope barging in and calling Steffy out on her marriage interference. It’s only fair since Steffy also accused Hope of interfering in her marriage to John “Finn” Finnegan (Tanner Novlan), but Steffy will think there’s a big difference.

Since Steffy will believe she’s on the right side of both the Sheila situation and the Deacon situation, she’ll act like her interference is warranted. Steffy won’t care if Hope’s offended since this is all about protecting the kids – at least that’s how Steffy will feel about it!

As other news pops up, we’ll deliver more updates. B&B spoilers say Hope and Steffy will spew some harsh words as they face off, so stick with the CBS soap. CDL’s where you want to be for scorching Bold and the Beautiful spoilers, updates and news, so drop by frequently.