The Bold and the Beautiful Spoilers: Steffy Furious as Finn Breaks Latest Promise to Cut Sheila Out 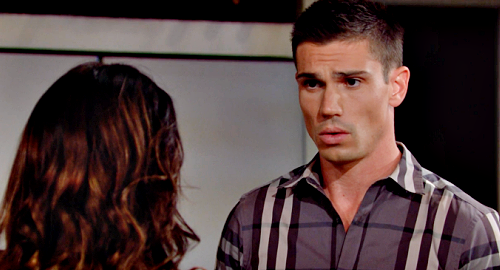 The Bold and the Beautiful (B&B) spoilers tease that Steffy Forrester (Jacqueline MacInnes Wood) will be furious over John “Finn” Finnegan (Tanner Novlan) and Sheila Carter’s (Kimberlin Brown) new communication. Steffy’s husband will inevitably break his promise to cut his birth mom out of his life, so that’ll leave her wondering what’s best for her family.

When Finn was forced to choose between his wife or birth mother, the choice was simple for Finn.

Since Finn wants to put Steffy and the kids first, he was quick to shut Sheila out of his life. Steffy was pleased to see Finn taking a firm stand and praised him for walking away, but this obviously won’t be the end of the story!

Sheila is obsessed with getting to know Finn and Hayes Forrester Finnegan (Piper Harriot), but Steffy is the biggest obstacle in her path.

B&B spoilers say Sheila will target Steffy and work to make sure she doesn’t get in the way indefinitely. It’s clear that if Steffy continues to cause roadblocks for Sheila, she’s going to regret it.

As for Sheila, she’ll keep manipulating the situation as best as she can. It’s possible Sheila will fake a medical setback and push Finn to help nail down her mysterious diagnosis.

Sheila might act like it’s a problem that only Finn can solve and insist it’s something the tests aren’t picking up.

Then again, Sheila might latch onto Paris Buckingham (Diamond White) as someone who can help her play this twisted game.

Paris understands why Finn would want to know his birth mother, so maybe Sheila can use Finn’s supportive friend and her growing desires for him.

Regardless, Sheila will surely find some strategy that’ll help her score more communication with Finn – and that’s exactly what Steffy just can’t tolerate.

Steffy wants Finn to cut off contact completely, but Finn is bound to go against Steffy’s wishes and break his vow to her.

Finn and Steffy are stuck in a strange not-really-married limbo since they had their ceremony, but they didn’t file the marriage certificate to make it official.

Although Steffy and Finn consider each other spouses at this point, that may not be the case for much longer.

Sheila will no doubt manipulate Finn again and shake Steffy’s faith in him once more. The Bold and the Beautiful spoilers say Steffy and Finn’s relationship is headed for more trouble, so stay tuned.

CDL will have other hot Bold and the Beautiful spoilers, news and updates for you, so check back often.