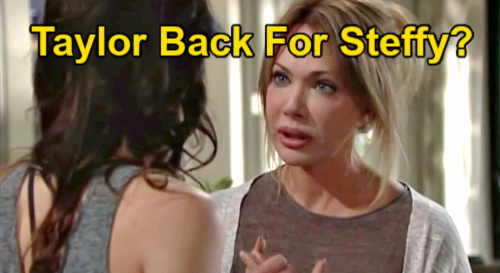 The Bold and the Beautiful spoilers document that Steffy Forrester (Jacqueline MacInnes Wood) is facing a serious, multilevel crisis. Steffy’s newborn son and new husband are in danger and she needs her mom.

The same individual who shot Steffy’s mother, nearly killing her years ago, has stunningly reemerged. Based on learned experienced it’s clear that Sheila Carter (Kimberlin Brown) can’t be stopped unless a collective group effort is in force.

Steffy needs the type of support that only her mother can offer, considering that John Finn Finnegan’s (Tanner Novlan) emotions are conflicted and that Hayes Forrester Finnegan (Samantha Worden and Piper Harriet) is vulnerable.

One of B&B’s all-time leading ladies first appeared on the screen more than 30 years ago. Taylor Hayes (Hunter Tylo) was last seen in 2019, when she unknowingly helped Reese Buckingham (Wayne Brady) sell Lope’s newborn daughter to Steffy under the guise of a private adoption.

Finn considered Jack Finnegan (Ted King), to be a stand-up guy. Jack was a good father to Finn and appeared to be a loving husband to Li Finnegan (Naomi Matsuda).

Fans were witness to Jack’s revealed duplicity. He and Sheila cavorted decades ago, at the hospital where Li was a practicing doctor. Nurse Sheila, as she is known to have previously done on B&B and on The Young and the Restless, willingly engaged in vow breaking.

Steffy has no idea that Jack’s secret is forcing him to do Sheila’s bidding. That negates the paternal protection that Finn’s actual biological father would normally be offering at this point in the plot.

Bold and the Beautiful Spoilers – Taylor Hayes Missing No More?

Taylor’s inability to attend the Sinn wedding needed to be addressed, as it wouldn’t be consistent for her not to have been present. But Steffy’s explanation doesn’t prevent her mom from checking in now or in the near future.

Tylo’s return to the cast would fit nicely with the current storyline and for historical reasons. Along with Ridge Forrester (Thorsten Kaye), Taylor would stand guard over Steffy, Hayes, and Kelly Spencer (Avalon and Colette Gray).

The seemingly perfect Sinn pairing is in danger because of Sheila. Steffy needs serious backing to confront this threat. Her mother is the best person who can return to Los Angeles, California, and join the fight. Fans will see if that happens on B&B.