The Bold and the Beautiful Spoilers: Taylor Attacks Sheila – Hunts Down Finn’s Mom 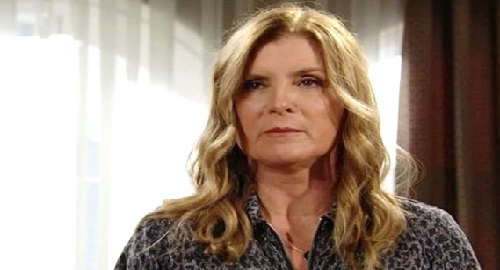 The Bold and the Beautiful (B&B) spoilers tease that Taylor Hayes (Krista Allen) may storm in Sheila Carter’s (Kimberlin Brown) hotel room and hunt down John “Finn” Finnegan’s (Tanner Novlan) bio mom for a showdown. Let’s talk about the faceoff that should be brewing between these vicious rivals.

After Krista Allen makes her first appearance as a Taylor Hayes recast on December 10, there’ll be some great family bonding going on. Taylor will have an opportunity to reconnect with Steffy Forrester (Jacqueline MacInnes Wood), Thomas Forrester (Matthew Atkinson) and Ridge Forrester (Thorsten Kaye), so she’ll naturally want to hear what’s going on in all their lives.

Of course, Steffy’s bound to have some Sheila updates. She probably filled her mom in on a lot over the phone, but there’s nothing quite like venting in person! Steffy will inevitably gripe about Sheila’s visits to the cliff house, including the one where she manipulated her way into holding Hayes Forrester Finnegan (Piper Harriot).

Hayes is Taylor’s namesake and an innocent child, so Taylor will certainly look after him. Taylor should be in full agreement with Steffy that the children must be protected from Deacon Sharpe (Sean Kanan) and especially from dangerous Sheila.

The Bold and the Beautiful spoilers say Sheila will fight for progress with Finn during a visit to his office, so that could serve as another way to rile Taylor up if she gets the news. Taylor should eventually find herself downright furious and ready to rumble, so Sheila had better watch out.

Although Taylor could wait for Sheila to cause more problems, she could just as easily march right over to Sheila’s hotel room early on. Taylor may invite herself in and lay down the law about Hayes being off-limits along with Kelly Spencer (Avalon and Collette Gray).

Since B&B will want to play Taylor up as mom defending her daughter’s family, it makes sense for Taylor to barge in and bark some warnings. Sheila won’t listen to whatever Taylor has to say, but that won’t stop Taylor from making her stance clear when it comes to leaving Steffy’s marriage and children alone.

As other B&B info comes in, we’ll provide the latest details. The Bold and the Beautiful spoilers say Sheila will come face to face with Taylor again sooner or later, so there are sure to be some tense scenes following Taylor Hayes’ return to town. CDL’s where you want to be for terrific soap spoilers, updates and news, so drop by frequently.