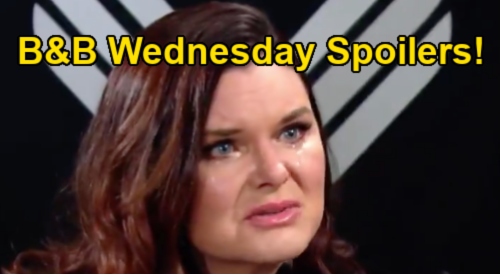 The Bold and the Beautiful spoilers for Wednesday, January 27, tease that Zende Forrester Dominguez (Delon de Metz) will have an uncomfortable conversation with Ridge Forrester (Thorsten Kaye).

As B&B viewers know, Ridge has just summoned Zende in for an impromptu meeting, and he wants to talk about Zoe Buckingham (Kiara Barnes).

Of course, Zende has just ended a very difficult exchange with Zoe in the backstage area, where Zoe confronted Zende about the text that he sent to her on the night that she and Carter Walton (Lawrence Saint-Victor) first got together.

Zende told Zoe to drop the whole thing, while Zoe came on strong and insisted that they should explore what’s going on between them.

Now, Zende will have to deal with Ridge’s pesky questions about Zoe. Ridge has picked up on Zoe’s attraction toward Zende in the past, and now he feels very protective of Carter and wants to make sure that Carter’s not getting used.

It looks like Ridge’s questions for Zende will revolve around Zoe and Carter’s relationship, and Zende’s going to have to cover when Ridge probes about Zoe’s true feelings.

Meanwhile, it appears that Paris Buckingham (Diamond White) and Zoe’s confrontation will continue in the backstage area at Forrester Creations. As B&B viewers know, Paris overheard Zoe coming on strong with Zende, and she’s in the process of blasting Zoe for stringing Carter along while also pursuing Zende.

Look for Paris and Zoe’s argument to escalate on Wednesday’s episode, as Paris lets her sister have it for thinking she can have it all. Of course, we can’t forget that Paris also has an attraction to Zende, so there is big element of sibling rivalry here.

Things are really barreling toward Carter finding out about Zoe’s feelings for Zende!

Over at Spencer Publications, Bill Spencer (Don Diamont) will continue to try to get Katie Logan (Heather Tom) to take him back and reunite their family with Will Spencer (Finnegan George).

Unfortunately for Bill, Katie has just made a pretty compelling case for why she shouldn’t take Bill back, including the message that it would send to their son.

Well, B&B spoilers for Wednesday’s episode say that Bill will continue to fall on his sword as he tries to win Katie back. However, Katie’s not going to take Bill back just yet. Rather, ongoing B&B spoilers indicate that Katie will seek some advice from Donna Logan (Jennifer Gareis) as she mulls over the situation.

And Bill will apparently seek some counsel from Wyatt Spencer (Darin Brooks) as well, as he tries to figure out whether he needs a new approach to wooing Katie back.

We suspect that Bill and Katie will ultimately reunite, but it will probably take some doing for them to get there. We’ll see if Donna and Wyatt will help further the effort along.

Wednesday’s episode of B&B sounds great – be sure to tune in! We’ll keep you posted on all the latest news and updates on Bold and the Beautiful. Stick with CDL for all your hot soap spoilers!

When worlds collide, the drama doubles! 🙌 Remember these @BandB_CBS guest stars from crossovers of #YR’s past? The crossover fun will continue, so make sure to keep tuning in! pic.twitter.com/5J9TcIBhKl