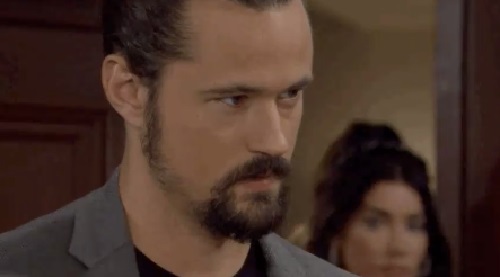 At Forrester Creations on Wednesday’s B&B episode, Steffy Forrester (Jacqueline MacInnes Wood) talked to Hope about how Thomas needed to get out more. Hope agreed it’d be good for Thomas to move on.

When Liam appeared, he realized he’d interrupted a conversation about Thomas. Hope suggested that although she wanted Thomas to find somebody, she didn’t think it was a big deal that he hadn’t yet. Liam pointed out it didn’t seem like Thomas was fixated on Hope – and Hope backed him up on that.

Even so, Steffy wanted Thomas to be happy and find a sense of fulfilment in his life. Meanwhile, Thomas praised Paris in the design office. He had plenty of good things to say about Paris’ talent and creative spirit. Thomas was really looking forward to getting to know Paris more.

After Zende Forrester Dominguez (Delon de Metz) walked in, he gushed about Paris being full of surprises. Paris offered one in the form of tickets to the Dodgers game and promised there’d be another one later. Zende was thrilled and thought he had the best girlfriend in the world. He insisted Paris was awesome before Thomas said he’d check out the game and might see them on TV.

Once Paris and Zende were decked out in their Dodgers gear, Zende wanted to get to their seats. Paris had something to do first and wound up singing the national anthem before the first pitch. Zende’s jaw dropped over Paris’ second surprise as she sang to the crowd.

Back with Thomas, he found Liam, Hope and Steffy in the main office. When Thomas offered to watch the kids for Hope and Liam, Steffy suggested they could return the favor if Thomas has a date some time. Once Thomas was alone with Steffy, she seemed quite curious about his thoughts on Paris.

Thomas zoned out for a moment as he thought back to Zende talking about how awesome Paris was. After Thomas regained his focus, he acted like he was jealous of the Dodgers tickets and turned on the TV. Both Steffy and Thomas were floored to see Paris singing the national anthem at the game.

While Paris was singing, Thomas seemed totally transfixed – and Steffy picked up on it. Afterward, Thomas was blown away by Paris’ talent. Steffy talked about how great Paris was with the kids and what a powerhouse she was at work.

Thomas once again complimented Paris’ voice before Steffy suggested she was beautiful inside and out. “She really is,” Thomas said in awe. He mentioned Paris’ enthusiasm, style and sense of humor, but he felt she was so much more than all that. “I’ve never met anyone like her,” Thomas said.

As for Liam and Hope, they savored some alone time. Hope and Liam made love during their romantic rendezvous at the cabin before enjoying some fruit together. Liam thought back on when they were apart and how he used to try to remember all the little things about Hope he loved so much. He promised he wouldn’t take any of those things for granted ever again.