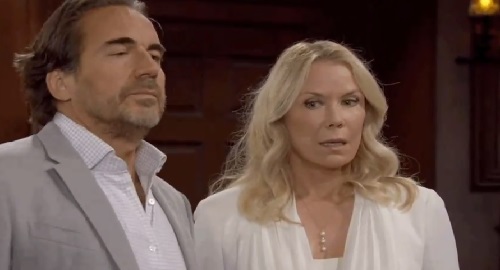 The Bold and the Beautiful (B&B) spoilers recap for Wednesday, September 29, reveals that Katie Logan (Heather Tom) hated the idea of being Bill Spencer’s (Don Diamont) runner-up while Brooke Forrester (Katherine Kelly Lang) and Ridge Forrester (Thorsten Kaye) were on an angry mission.

At Carter Walton’s (Lawrence Saint-Victor) place on Wednesday’s B&B episode, he was concerned about Justin Barber’s (Aaron D. Spears) next move. Quinn Forrester (Rena Sofer) was also worried about the mess Justin would create if he went to Ridge – and Carter agreed there were so many different horrible ways this could be twisted.

At Forrester Creations, Justin faced pressure to come out with whatever he’d learned about Quinn. He eventually admitted to Ridge and Brooke that he followed Quinn to Carter’s loft, where he caught them together in the bedroom.

Justin pointed out that Carter and Quinn pushed him to keep quiet. He added that they claimed it wasn’t cheating, but Ridge was eager to get over to the loft and wouldn’t let Justin elaborate. Brooke decided to go with Ridge, who praised Justin for a job well-done.

Back with Quinn, she feared how the secret getting out would affect Eric. Quinn once again confirmed she loved both Eric and Carter before Ridge started banging on the door. After Ridge and Brooke entered the loft, they fumed over the repeat betrayal. However, Quinn blurted out that Eric knew as she scrambled to explain.

At the Forrester mansion, Eric fished to find out how everything was between Katie and Bill. Katie ranted about Bill’s reckless behavior leading to his jail stint and confided how difficult it was to protect Will Spencer (Finnegan George) at the time.

As for a potential future with Bill, Katie suggested she’d been hanging on in some ways for Will and in other ways for herself. She got emotional over her Brooke insecurities and had to ask herself if Bill would be with her sister if he could. Katie didn’t like the thought of being the runner-up and added that Bill didn’t want to change his flaws.

Eric hinted about how important it is to make sure a woman’s needs are met. He wasn’t keen on the idea of Katie getting back together with Bill to avoid being alone, but Katie felt that’s what Eric was doing in his marriage to Quinn.

Since Eric had been so cagey lately, Katie reminded him of the trust between them. Eric eventually admitted Quinn was more satisfied than ever, but he didn’t think Katie or anyone else would understand the situation. Katie gave another gentle nudge, so Eric decided he’d come clean about what was going on with Quinn and Carter.