The Bold and the Beautiful Spoilers: Week of September 6 Preview: Finn Tells Steffy He Refuses to Abandon Sheila 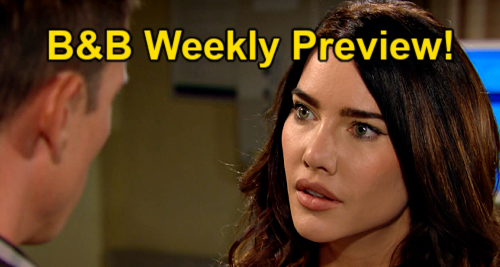 The Bold and the Beautiful spoilers reveal the weekly preview for September 6 to September 10 shows John “Finn” Finnegan (Tanner Novlan) does a 180. Finn agreed to no more contact with Sheila Carter (Kimberlin Brown). After Sheila’s rushed to the hospital, Steffy Forrester (Jacqueline MacInnes Wood) reacts as Finn announces he can’t abandon his mother.

B&B spoilers reveal that after moving into the guest house, Finn had some time to think about his actions. Steffy couldn’t even look at Finn when he allowed Sheila to hold Hayes Forrester Finnegan. After a bit of time and space apart, Finn realized that he should never went along with Jack Finnegan’s (Ted King) advice. “SINN” came to an agreement and were finally on the same page. Sheila can’t be a part of Finn’s life and there will be no further communication between them.

After Steffy left, Sheila opened the sliding glass door and waltzed in as if she owned the house. Finn couldn’t believe the audacity of his birth mother. Without wasting much time, Finn immediately said that he was abiding by his wife’s wishes and told Sheila to leave.

While Finn’s back was turned, Sheila suddenly collapsed. This is where the B&B episode ended on Friday, September 3. The weekly preview teases what fans can expect when Sheila arrives at the hospital with Finn staying close to his mother’s side.

Won’t Abandon Birth Mother
The Bold and the Beautiful spoilers reveal that the preview shows Steffy arriving at the emergency room. Finn tells his wife not to say or do anything that will upset his mother. Steffy scoffs and loudly states that Sheila is faking her medical emergency.

Finn blurts out that Sheila is his mother and he can’t abandon her. Now, that sounds as if Finn is going back on his agreement with Steffy. It also sounds more like a statement than a suggestion.

The Bold and the Beautiful Spoilers: Steffy Forrester’s Threat

Once Finn is out of sight, Steffy blasts through the hospital door. Lunging toward the villain, Steffy says she knows it’s all an act. Steffy adds that Sheila will never get anywhere near Finn or their child.

This is when Sheila insists that she will always be a part of her son’s life. It certainly sounds like Steffy and Sheila are going to war. As for Finn, he will have to choose between the two women in his life. Let’s hope he makes the right decision.

It’s Sheila vs. Steffy coming up on B&B! #BoldandBeautiful is new this week on @CBS. Watch the latest episodes on @paramountplus. pic.twitter.com/gvasr4lJdV