The Bold and the Beautiful Spoilers: Why Did Vinny Drop Those Pills – Is More Addiction Drama Coming? 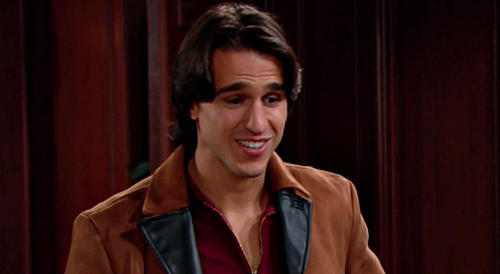 The Bold and the Beautiful (B&B) spoilers tease that something interesting happened on a recent episode of the show. As B&B viewers will remember, Thomas Forrester’s (Matthew Atkinson) friend Vinny Walker (Joe LoCicero) visited with Thomas at Forrester Creations.

Vinny wanted to check in on Thomas and see how his buddy was doing since his big health scare.

Well, during Vinny’s in-office visit, an alert on Vinny’s phone went off, and while he was fumbling around in his jacket pocket, an unlabeled pill bottle fell out of his jacket and landed on the floor.

Vinny quickly picked up the bottle, and Thomas didn’t seem to notice the incident, although the camera zoomed right in on the pill bottle for viewers.

Clearly, TPTB wanted viewers to see the pills, so there must have been some significance of reminding viewers about exactly where Steffy Forrester (Jacqueline MacInnes Wood) got her illegal stash of opioid painkillers last year.

B&B viewers will remember that it was Vinny’s stash of pills that Steffy was taking when she passed out on the couch and Liam Spencer (Scott Clifton) found her.

Of course, we should point out that Steffy’s now pregnant and there’s no indication that she’s on a path to addiction again, yet there must be some importance to Vinny dropping the pills and the camera zooming in on them. Might someone else on canvas be poised to start using pills?

Long-time viewers of B&B will remember that Hope Spencer (Annika Noelle) had a bout with prescription pills at one point, back when Hope was being portrayed by Kim Matula.

This was quite a while back, but one wonders whether Hope could go down that road again, especially since she had a brief interaction with Vinny in the office right after he dropped the pills.

We should also point out that Thomas has used Vinny’s pills in the past to further along his manipulative plans. B&B viewers will remember that Thomas drugged Liam one summer, causing Liam to hop into bed with Steffy.

It was a big deal at the time, and Liam and Steffy never found out that Thomas manipulated them in that way.

Of course, now Thomas is supposedly reformed, so it doesn’t seem like he’d be using the pills for any new nefarious purposes. This all leaves us with a real mystery about exactly why the pills popped back up on the show in recent days, and what it all means.

Perhaps everyone’s about to find out that Vinny provided the opioids to Steffy, which might cause an outrage.

We’ll see what happens, but the whole pill bottle emergence has us scratching our heads about what it was all for. Why do you think Vinny and his pills showed up again on the B&B landscape?

Do you think it’s foreshadowing something significant? Stay tuned to B&B and we’ll keep you up to speed on the latest Bold and the Beautiful spoilers, daily episode recaps, and news.