The Bold and the Beautiful Spoilers: Zende & Paris Split Over Finn – Bonding Leads to Cheating? 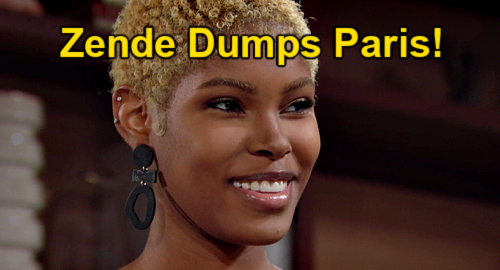 Paris and Zende have a rather strange relationship since they were already going slow when they agreed to go slower!

It’s not like Zende and Paris were caught up in this wildly passionate romance where they couldn’t keep their hands off each other.

That’s why it was odd when Zende pumped the brakes even further – and Paris agreed about not rushing anything and just seeing what happened between them.

Of course, that also means that Paris isn’t all that committed to Zende. It’ll make it much easier to shove Zende out of her mind as Paris grows closer to Finn.

After Finn’s relationship with Steffy Forrester (Jacqueline MacInnes Wood) implodes, he’s going to need somebody to lean on.

Paris will think she can be that person and will have several bonding sessions with Finn in the coming weeks on B&B.

Zende may end up jealous and uncomfortable over what seems to be brewing between Paris and Steffy’s man.

We could see some cracks in what little commitment there is as Zende feels Paris pulling away.

Paris will feel like she has to help a friend in need, but Zende may wonder if her feelings run deeper than friendship.

There’s also the matter of Sheila Carter (Kimberlin Brown) and the different opinions her destruction will bring.

Paris will understand why Finn allowed Sheila’s visit with Hayes Forrester Finnegan and will get why Finn’s drawn to his birth mom despite her many mistakes.

Zende, on the other hand, will no doubt side with Steffy as part of his family. He’ll be “Team Forrester” and that’ll make him “Team Steffy” as a result.

During the week of September 6-10, Zende and Paris will fight over all the Sheila madness.

They’ll face some serious conflict as Paris plants herself firmly in Finn’s corner while Zende refuses to budge from Steffy’s.

Zende and Paris’ relationship isn’t very strong anyway, so this is the kind of tension that could really take a toll.

It could be enough to convince Zende to dump Paris if all the Finn bonding keeps up.

If Paris and Finn cheat and share a kiss or perhaps more, that’ll really seal the deal on Zende walking away! We’ll keep you in the loop as other B&B news and updates emerge.

The Bold and the Beautiful spoilers say Paris and Zende are headed for trouble, so don’t miss what’s coming up.

CDL’s the place to be for sizzling Bold and the Beautiful spoilers, updates and news, so make us your number one source.