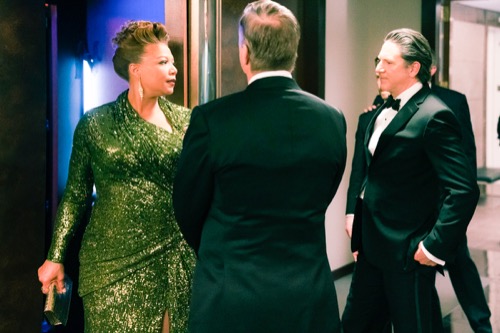 The Equalizer airs tonight on CBS with an all-new Sunday, February 28, 2021, season 1 episode 4 called “It Takes a Village,” and we have your The Equalizer recap below. On tonight’s The Equalizer episode as per the CW synopsis, “McCall investigates a community activist’s staged suicide and uncovers a connection between his murder and his protests over local real estate development.

Also, Delilah’s driving lessons lead McCall and Aunt Vi to teach her an even bigger lesson regarding personal accountability.”

In tonight’s episode of The Equalizer, a young woman talks to her friend about being nervous to go on a blind date. He encourages her to go. Later, she walks home, calling him to tell him how great it was. When she turns the corner she sees a crowd and her friend, dead on the hood of a car.

Robyn comes home with her daughter. They are arguing about her driving lesson. Robyn vents to Viola. She gets a call. Robyn heads to a nearby rescue where she meets with a distraught young lady and a man named Charlie who says her friend Malcolm is dead and the police are calling it a suicide. But she knows it wasn’t. He was a vocal man looking to change the neighborhood. Robyn agrees to help.

Robyn lets herself into Malcolm’s apartment. She sees a footprint on the wall that doesn’t make sense. She looks at his shoes. She heads to share the site with Melody and Harry. They all start digging. This is starting to look gang-related.

Robyn heads to the streets and pays a visit to a local street gang. She asks about Malcolm as they continue to try and intimidate her. They pull their guns. She pulls her pretend gun. They laugh until everything she points at explodes. Thanks to Melody from a distance shooting, they all freak out and run. Robyn gets a disturbing call. She heads to find Charlie. He admits he was working against Malcolm by swaying people to move out of the neighborhoods for a rich developer.

Robyn heads to the team to tell them about Harrington, the developer. Robyn heads to meet a cop on the NYPD to tell him what she knows. Later, the cop stops the local street gang from killing Charlie for talking. They call the leader Kenya in. Just as the cop has him ready to confess, his lawyer arrives.

Viola and Robyn watch a video of Malcolm in the kitchen. Robyn’s daughter comes down, still upset over a pothole from the other day. She has done her research and there are several complaints by drivers into the city. Viola and Robyn ask her what she is going to do about it.

Robyn and the cop talk. They need to nail that developer. They head to a press conference Harrington is holding. At the conference, Harrington uses Malcolm as an example as to why the people should be for a redevelopment.

Harrington goes on to point out power outages and several other issues. Robyn has Harry do some digging. Harrington is behind all of these outages and inconveniences to push people his way. Harry is looking into Harrington’s files.

Robyn tracks down William. She asks him if he feels like helping. They talk. She explains all about Harrington and how she thinks he has terrorist ties and more. They plot out how to take him down.

Robyn heads to a restroom where she accepted bumps into Harrington’s son. She talks him up, gets him drinking, and then talks about his dad. The son vents. Talks about losing the love of his life. Robyn shares that his dad was behind that and a whole lot more, bringing a file of proof. The son is now on board, angry his dad betrayed him. There is an event he tells her about. Together they can take him down.

At the event, Robyn possesses as a businesswoman. William is on her side. The son introduces them. Harrington gets nervous and dismisses them. They head outside. Robyn is disappointed. William smiles. He has Harrington’s key card to the hotel. At home, Viola comforts Delilah who complained to the city about the pothole, and managed to get a meeting. The whole thing turned out to be a photo-op.

Robyn and William get into Harrington’s safe. She also manages to get to his server and uses a USB to get his files. Meanwhile, William catches the attention of security. When she gets out of the room, they are taken in. Security takes the USB.

Back at the hotel, Harrington’s son confronts him. Harrington shows his true colors. Harrington doesn’t know he is being recorded until it is too late. The video is streaming live throughout the city. Robyn is happy. William thought they were doing this quietly. He laughs.

Harry uses a drone to access Harrington’s server while Harrington is brought in by the NYPD. Later, Robyn meets with Malcolm’s friend. She is happy and sad. Charles has left town. But she plans to carry on Malcolm’s fight. She makes a speech with Harrington’s son by her side. Meanwhile, the cop who helped Robyn tells her no to cross any lines.

At home, Robyn consoles her daughter. Sometimes you hit walls but you need to keep going.