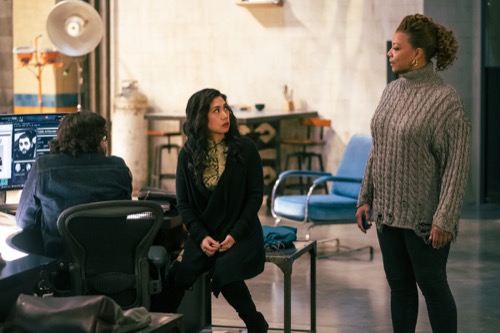 The Equalizer airs tonight on CBS with an all-new Sunday, May 9, 2021, season 1 episode 8 called “Lifeline,” and we have your The Equalizer recap below. On tonight’s The Equalizer episode as per the CW synopsis, “The daughter of McCall’s deceased CIA mentor is pursued by a hit squad in France; Aunt Vi becomes suspicious when McCall skips out on another family night for work.”

In tonight’s Equalizer episode, Robyn was called out of the blue one night. Her daughter and her daughter’s friend Nicki were having a girl’s night with Aunt Vi and Robyn was supposed to be enjoying the night with them however her call interrupted them. The call came from Robyn’s emergency phone. Only her inner circle within the CIA knows the number. The person who called Robyn said her boyfriend had been murdered by the police and that she needed. She didn’t get to say anything else because the call was dropped.

Robyn was concerned about whoever may be calling and so she brought it to Harry and Mel. She asked them to trace the call and they traced it back to Kevin Taylor. He wasn’t someone known to Robyn and so she suspected he might have been the boyfriend that was murdered. And it wasn’t until she got a photo of the person who called her, that she realized who it was.

It was Carla Henson. She was the daughter of David Henson who was Robyn’s mentor at the CIA and he recently was killed in a terrorist bombing in Ukraine two weeks ago. Carla was mentioned to Robyn several times in the past. Robyn wished to help her and she needed Bishop’s help. She wanted him to contact someone in the State Department while she tracked down Carla. Carla was twenty-five now and she was a conflict journalist.

There’s no telling who she might have ticked off or if this was even about her. It could be about her father and what he did for a living. Carla was in serious trouble because Mel was able to tell that a hit squad was chasing her based on their formation tactics and so Carla needed help now.

Carla was in Les Moureaux, France. She was running for her life through the woods with three men chasing after her and so the team’s first task was to get her to a place of safety. They called back the cell phone she used. Robyn identified herself as a friend of Carla’s father and she told her to hide at a nearby deserted factory.

Carla went to the location. She tried the door and it didn’t work, but Harry found another way in and he also suggested she ditch her SIM card. It was apparently being tracked by the hit squad. She needed to ditch it and Harry would connect her to the factory’s Wi-Fi. The trio lost sight of Carla once she went into the building. They had to hack the internal cameras and from there they were able to follow Carla.

Harry then set off the fire alarm inside the factory. It alerted the fire department and it also did away with the hit squad. Before they fled, Robyn asked Carla to take a photo of one of them from her hiding spot. She then asked Carla to text her the photo and they were running facial recognition while Robyn was reaching out to another friend. Robyn has a friend in France. She was a former MI5 and Robyn helped her out of a tight spot.

She now believes her friend will return the favor for her by helping Carla. Only Carla’s position has changed. She wasn’t being hunted by a kill squad because they wanted to kill her. They had a chance to kill her and they let it pass because they want to capture her alive.

Carla also knew about her father. She knew he was CIA and it led to a big blowout between them when she found out. Carla stopped talking to him. They hadn’t spoken in almost a year when he died and so now she feels guilty. She wishes she has the chance to tell him she still loves him. Robyn reassured her that he knew that in the end. Robyn told Carla what it was like working with her dad and how her dad always brought up Carla.

Even if it was just Carla’s terrible jokes. Robyn wouldn’t be here today with Carla’s father and so now she was going to save Carla. Her friend in France got back to her. She told Robyn she could pick up Carla and she was willing to do this in spite of the risk. Carla was being hunted by Mossad.

The photo she took was of Yossi Avraham. He was Mossad. He also used to work with Cillian Bruckner and nowadays Bruckner is awaiting transfer at Riker’s Correctional. Robyn knew someone who could help reach Bruckner. She called Detective Dante and she asked him to speak with Bruckner about Yossi.

Mainly she wanted to know who he was working for. Dante told her he could get this information in the morning because it was nighttime when she called and so Robyn was forced to wait. Her friend got to Carla and they left the factory together. Something must have happened after that because Robyn lost contact. In the morning, Dante called her back and he told her what Bruckner told him.

Bruckner said that Yossi was now working for “the Devil” himself. This information proved handy because Robyn was able to put two and two together and she realized who the devil was. It was Mason Quinn. He almost killed Robyn in the past and so it was personal now. Robyn even knows what he’s after. Carla’s father was transporting an encrypted drive when he died and this drive carried the names of CIA operatives.

The bad guys must have the drive. They also must believe that Carla knows the password and that’s why they want her alive. Robyn wanted to know why Mason was involved. The last she heard, he was in a CIA cell and he was supposed to stay there until the day he died.

Robyn called Bishop. He told her that Mason had been traded for another asset in a backroom deal and he claims he didn’t tell Robyn about this beforehand because he was trying to protect her. Robyn called a bull. She also demanded a plane to be waiting for her on the tarmac and she was met with an extraction team. Together, the group traveled to Carla’s last known location.

They came across Robyn’s dead friend Allison first and Robyn followed the sound of torture until she found one of Yossi’s friends beating up David Henson. It turns out he was still alive. It also explains why they kidnaped his daughter. The bad guys were hoping to use her to pressure her father into giving them the code to the drive and unfortunately, Robyn was caught before she could help. Robyn was taken, hostage.

Mason it seems had wanted her alive. So, she was knocked out and Yossi continued threatening David with Carla’s life but Robyn wasn’t as knocked out as Yossi thought. She got back up while his back was turned and she signaled Carla to make a move. The two of them working together were able to overcome Yossi. Unfortunately, he still got a few shots off. He killed David and Robyn killed then Yossi. Robyn was later contacted by Mason. He threatened her life and she told him to try. She wanted the chance to kill him.

Carla survived her ordeal. She was forced to watch her father die a second time and so all she wanted to do was return home. Robyn later brought her back to the states. She’ll have to talk to the CIA because Robyn recovered the drive and other than that Robyn handled the rest. She even notified Kevin’s family.

Robyn wasn’t happy with Bishop after this because she still feels she should have been told about Mason, but there was nothing she could do about it now and she had to return home where her family now has even more questions for her. Her daughter wants to know where Robyn goes in the middle night. She found Robyn’s passport and it was empty. Now, she has questions and Aunt Vi wanted to talk to her as well.

Aunt Vi knew the truth. She didn’t know the specifics and so she asked Robyn to tell the truth or else she wasn’t going to help her cover up what she’s doing anymore and so Robyn told her she was former CIA. She also added that now she’s working for herself. She even showed her aunt the message she put out there and Vi was worried because she didn’t want Robyn to get hurt. And she also thought Delilah deserved the truth.