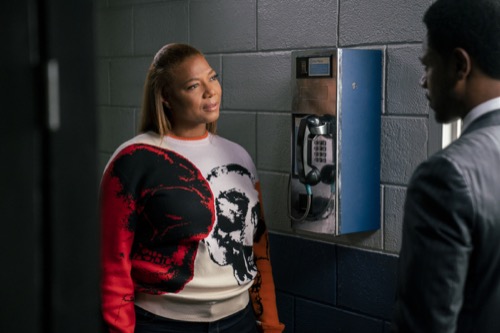 The Equalizer airs tonight on CBS with an all-new Sunday, October 31, 2021, season 2 episode 4 called “The People Aren’t Ready,” and we have your The Equalizer recap below. On tonight’s The Equalizer episode as per the CW synopsis, “McCall comes closer than ever to being captured when she races to prevent the murder of District Attorney Grafton, the prosecutor seeking to bring her to justice.”

The Equalizer begins tonight with ADARAymond Ellis (Armando Riesco) feels he is looking at the wrong person when he’s determined to take down the vigilante, looking directly at Detective Marcus Dante (Tory Kittles). Inside the prison, you can hear the inmates shouting that they will be back at it again tomorrow after Louie. He looks at a picture on his wall with tears in his eyes, the following morning when the warden does his rounds they spot Louie hanging and call for a “man down.”

Robyn McCall (Queen Latifah) is having breakfast with her Aunt Viola “Vi” Marsette (Lorraine Toussaint) and her daughter Delilah (Laya DeLeon Hayes), debating what is too much money to spend on a cell phone; D hopes her mother has some perks from her job that can get her stuff. Robyn gets a call and heads out, saying if she wants a $1500phone, she should go get a job.

Robyn arrives at the Mederos Food Truck, where his uncle reveals that his grandson was in prison and hung himself; but he never stole the car because he had more than enough evidence to prove that he was with him when it happened. He doesn’t even think the police looked at the information and it has been over 2 years and still not even a trial. Robyn doesn’t know how to help but then she learns about Louis’ father, Hector who is in trouble too. He has never missed a day in 32 years and something is wrong.

Harry Keshegian (Adam Goldberg) and Melody “Mel” Bayani (Liza Lapira) are watching the press conference with DA Grafton (Jennifer Ferrin), where Hector approaches her and indirectly threatens her. It appears that Hector was survielling her for the past couple days before he disappeared and his phone has dropped out of sight 2 days ago. Robyn feels they need to tell someone they can trust with the situation and asks Harry and Mel to find Hector before he does something.

McCall meets with Dante, encouraging him to beef up security around DA Grafton; but she spots ADA and tells him to arrest her, just in time for the ADA to hear Dante saying he is arresting the vigilante.

Harry voices his concern to Mel, saying they are not going to find Hector viewing street cams. He tagged his financials and his phones; neither of them like waiting around. Mel is furious how the bail system is rigged so unfair, when suddenly Harry spots McCall got arrested on one of the camera. Meanwhile, at the precinct, Dante informs DA Grafton that the vigilante refuses to give up her name and her DNA. He does believe that the threat is real but she will not tell them the source. Grafton clears the room and talks to Robyn.

Grafton tells Robyn she is disappointed that she didn’t put up more of a fight as Robyn says that she has a warning; Grafton says she will not take the advice of criminals when Robyn suggests she beef up security to err on the side of caution. She says people being mad at the DA is part of the job as Robyn tells her she thought she was smarter than this and she hopes that she isn’t too disappointed as she is just passing through. She orders Dante and Detective Ken Mallory (Dominic Fumusa) to play nice together. Robyn has no interest in helping Mallory, saying he can give her the right to her first phone call.

She calls Mel, saying she had to get arrested because Dante was in a tight spot. She is working on a way out of there and to not contact William Bishop (Chris Noth). Harry and Mel bicker about working together but he ends up winning when she tells him he is adorable but annoying.

In the cell, Robyn makes her position known fairly quickly and takes on the toughest women in there and takes a seat. She tells the other woman to back off and play nice too. Mallory spots Dante reading a case file and together they discuss Hector’s activities just before he got into a screaming match at the DA’s press conference. Mallory feels this case just keeps getting better and better when he realizes it was Dante who punched out DA Ellis and they now need to speak to him.

Dante wants to know why they didn’t expedite the case and if the case was moving too slow for him, maybe he should have chosen a different career; this time Mallory comes to Dante’s defense.

Harry and Mel go into Hector’s hotel room, there is too much evidence there to the point that they both feel it was staged. Someone barges in and attacks Harry and Mel, but is able to escape; neither sure who it was. Harry can’t make a fist, but they scour through the bag the man left behind. It had stuff from the Mederos Foodtruck; they were planting fingerprints. This evidence was clearly not meant to be found until after the DA was assassinated; Mel is able to remove a bullet from the wall and narrowly escape before Dante, Mallory and the other police arrive.

Dante comes to see Robyn in her jail cell dressed as her lawyer, so Robyn tells him she is well aware of everything so far. They are trying to make Hector their patsy. Robyn presses for them to put the DA underground. Robyn calls Vi and explains that she is in jail and cannot make it to game night but she wants her to tell D the truth and she will make it home as soon as she can. When Vi hangs up, D learns her mom is not coming home because she was arrested and Vi doesn’t know how bad it is nor what she did; but she doesn’t want them to worry so that is what they are going to do.

Mel tells Harry that Robyn says she has everything under control but once she is transferred tomorrow it is going to be much more difficult to save her. Suddenly the young son who attempted to hang himself, wakes upto his grandfather reading to him.

Whoever has Hector, rips the tape off his mouth and tells him to eat. Meanwhile, the woman Robyn was arguing with earlier in the cell returns. She tells her there is no need for her to be so tough all the time and instead of fighting her, she should fight for herself. Robyn says she sees a scared young girl who is making hard choices to change her life but it just takes someone to believe in her. It takes only one person to have faith but it still takes a lot of work. She tells Robyn she doesn’t have time for this but Robyn tells her to make time unless Robyn was wrong with her.

Dante traced the bullet to the Bridgetown Cliche, ran by a guy named Johnny O. Robyn says she can find out for sure but she needs to make her third phone call. They are able to profile the shooter to a Rich Siraci, they are not sure why the crew is after the ADA but when Hector went after her publicly it gave them their perfect scapegoat and won’t leave any loose ends. Robyn needs Dante to get her out of there, if not, they will have two deaths on their hands.

Dante is riding with Robyn and Mallory has called him 5 times already. She promises she got him as this is what she does. If she needs to go back in when this is all over, she will go.

In the morning, Vi is preparing to bring Delilah to school; but both struggle with the idea, in the end, believing Robyn knows what she is doing and they will have to trust her.

In the meantime, Robyn is looking at a book when Johnny O walks in the room, her confronting him about putting a hit out on the DA and making Hector the patsy; which is a problem for her because he is a friend of hers. Johnny says he lives for this and she is lucky to be a live at the moment, so she should get out while she still can as this cigar club is for male members only. She encourages them to enjoy them while they can and leaves.

In Dante’s car, she was able to clone Johnny’s phone and Dante immediately recognizes the voice as Walter Ellis’. He hangs up the call and gets into the car with the ADA and points a gun at her.

Robyn tells Dante they are flipping the script and not going to city hall. Hector sees Grafton and realizes that they are trying to make him be the patsy and kill her. Hector says killing her is not justice, that is vengeance. Robyn and Dante make it into the building as Ellis orders them to drop their weapons. Robyn and Grafton look at each other and quickly understand each other. They shoot Ellis as Hector learns that his son, Louis is awake and talking.

Grafton watches Dante put the handcuffs on Robyn’s wrists as Robyn asks what happens next? Grafton asks for the keys and releases Robyn, saying she doesn’t approve of her methods but she can move past it for now.

Back at the precinct, Mallory says Dante must be proud of another rescue and no face nor name; but Mallory is getting a raise and moving into another department. Mallory warns Dante that if he keeps working with this woman he is going to need a cell right next to his father’s.

The young woman, Kesha Griffin, who was in the cell with Robyn, walks into a clean living home. There is a letter waiting for here there from Robyn. Robyn tells her that she believes in her and if she ever needs help to call her. Kesha walks to the desk and says she is ready!

Hector is able to hug his son and hold his father’s hand as Grafton walks in. She is there to inform them that the charges are being dropped against Louis, and being dismissed. She watched the video and we are part of the problem and sometimes the system can be faulty. She is asking her department to open more cases like these to make sure it doesn’t happen again.

Harry confesses that Robyn is completely wiped from the police computer system and is forced to reveal that he hurt his hand “protecting his lady.”

Robyn walks in as Vi calls her the “jail bird”. She apologizes but says she is fine now but Delilah says when she is in real trouble, she needs to tell them so they can really help her.