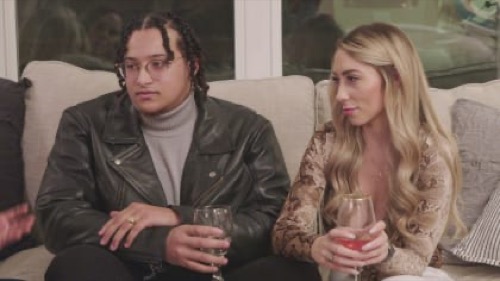 Tonight on TLC their reality show The Family Chantel airs with an all-new Monday, November 8, 2021, episode, and have your The Family Chantel recap below. On tonight’s The Family Chantel season 3 episode 5, “Risks and Rewards,” as per the TLC synopsis, “Pedro has enough of Chantel’s judgement of his family; River is in the hot seat when he gets interrogated by Megan’s friends; Alejandro seeks out relationship advice from his aunt and pleads for Nicole to give him a second chance.”

So make sure to tune in tonight between 8 PM – 9 PM ET for our The Family Chantel recap.  While you wait for our recap make sure to check out all our television spoilers, news, recaps, and more, here!

In tonight’s The Family Chantel, Winter wasn’t the only one taking exes back. Nicole was now doing the same with her ex-boyfriend Alejandro and that was thanks to her bother. Pedro is probably kicking himself now. But his fight with Alejandro helped cleared things up. It made Nicole feel bad. She blames herself for the fight because Pedro wouldn’t have gotten into Alejandro face if it hadn’t been for her and that also now has her believing that Pedro was constantly picking on Alejandro.

There was no need for them to fight. It made Nicole feel defensive about her former boyfriend. It also got her thinking about how good things used to be and she also remembered how much she loves him. She only broke up with him because he was messaging other women. And telling them to come visit him in New York.

It was clear that he cheated. If not physically, then he at least tried to do so and was already cheating emotionally. Nicole was already forgetting about that in the haste to make up for Pedro. She heard that Pedro blamed Alejandro for her staying with Alejandro during the first outbreak of the pandemic and that hadn’t been his fault. It was Nicole’s decision.

She was the one who decided to stay with her boyfriend in NYC and leave their mother alone. But Pedro doesn’t take her to task. He doesn’t even yell at her because he blames Alejandro and that’s why he tried to fight Alejandro. Alejandro met up with him after the breakup because he had a gift for Pedro. He tried to be nice and Pedro began yelling at him from out of nowhere.

Pedro crossed a line. He doesn’t see it. Nicole sees it and the more he tries to keep her apart from Alejandro – the more she wants him. Nicole tries to pretend she never judged his relationship with Chantel, but she hates Chantel and has actively tried to break them up by any means necessary. She even recorded a video of him dancing too close to another woman just so she could share it with Chantel.

Nicole and her brother have a weird dynamic. They both claim to love each other and their mother only neither wanted to give up their loved ones to be with their mother. Their mother Lidia by the way hates both Chantel and Alejandro. She tried to talk Nicole out of taking him back and Nicole ignored her.

What Nicole didn’t do though was throw Lidia’s own past relationship in her face. Lidia was seeing a married man and she had two kids by him. Her children don’t believe she knew. They think their mother just never questioned why their father could only come at night and that she never thought it was weird she wasn’t invited to meet his family or why her children were never invited to spend the night at dad’s.

Chantel on the other hand thought it was strange. She asked Pedro to look at the situation with adult eyes and he refused to believe that his mother have known the truth. His mother always refused to discuss his father with him and his sister Nicole. She never mentioned it and so it was them that confirmed their father was married. And they also found out their father has two other children.

Pedro tried to discuss it with his wife. Only he wasn’t ready to hear any doubts about his mother’s role in the whole thing. Pedro just wants to be angry at his father and, speaking of parenthood, River was asked by his new girlfriend’s friends if he was ready to be a stepfather. River was currently taking things slow with Megan. They’ve been talking for a few months and they haven’t even kissed yet.

River hasn’t met her child yet either. He was only now meeting her friends and they were concerned about whether or not he was stepfather material. They also asked him why he’s still living at home. He is twenty-three and not in school. He’s currently trying to get a music career off the ground and he doesn’t seem to have a job or anything else going on and so Megan’s friends view him as a kid.

He was five years younger than Megan. He’s still living at home. His parents pay for his lifestyle and so he just seemed like a giant kid to Megan’s friends who came right out to ask him if he saw himself as a stepfather material. He wouldn’t answer the question. He kept trying to say that they were taking things slow. And that wasn’t good enough for the friends.

They didn’t see the point of dating if neither envisioned a future together. Or in his case, a future as a stepfather. River also felt ganged up on and so Megan asked her friends to back down but their questions were important and it probably does hurt Megan to hear him not answer that question.