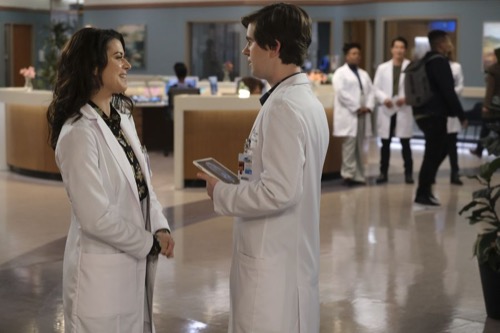 Tonight on NBC their new medical drama “The Good Doctor” airs with an all-new Monday, February 15, 2021, episode and we have you The Good Doctor recap below. On tonight’s The Good Doctor season 4 episode, 9 called, “Lim is challenged by the unique circumstances surrounding a pregnant patient with an aggressive tumor. Elsewhere, after misdiagnosing a patient, Claire makes a disconcerting discovery about certain practices at the hospital.”

Morgan is treating a patient and tells him that no surgery is needed, he says his fiancé will be thrilled, they are getting married in June. She looks at his tests and notices that in less than two weeks the tumor has doubled in size.

A patient comes into the ER and she is delirious, her name is Zora Norton, Claire is treating her when she goes into hypertension crisis.

Audrey is in Aaron’s office, he tells her maybe she should take some time off, she doesn’t seem fine. She says she is just tired and doesn’t need time off. She asks if there is a problem with her work performance, she says no, he tells her people are worried about her. He offers a therapist, she says no, it will hurt her career.

Claire goes back to see Ms. Norton, they need to do an echocardiogram. She shows Claire the pills that she takes for high blood pressure. They take her in for the test, Claire has a feeling that she is lying about something. Her heart rate starts climbing, she is in cardiac shock. Marcus tells Zora that certain parts of her heart have become thick and will require surgery. She has been taking her medication as prescribed, they are still looking into what is going on with her.

Claire gives Shaun a file, it is for Rio Gutierrez, the patient with the tumor. Olivia takes an ultrasound to see what is going on, he is pregnant. His fiancé is in the room and he looks just as shocked as Olivia. The testing confirmed the pregnancy is six weeks along. Shaun starts asking Rio’s fiancé if he is gay, and Audrey tells him that is enough and he should leave. Shaun leaves the room. Audrey apologizes and says that was completely inappropriate. Then she tells Rio that plans for the tumor depend on the plans for the pregnancy. Rio decides to terminate the pregnancy.

Shaun is sleeping beside Lea in the bed, he dreams about the radiologist, Cintia, he was speaking to earlier in the day, that the kisses him.

Rio changes his mind, he wants to continue the pregnancy. In that case, they need to remove the tumor. Rio says when he was seven, he one refuge, he would hang a quilt over some chairs and hide under with his two friends. He would imagine that he was the dad, and they were his fraternal kids, a family. When he transitioned, he put the dream aside, at least coming from him. Now, whether they planned it or not, this is their baby. Rio tells Audry he would want the surgery right away if possible.

Claire speaks to Zora about the surgery, she gives her two options and tells her there are pros and cons to each. Zora asks for her opinion, Claire says she would take the riskier surgery that offers better long term outcome.

Shaun is with Alex and Cintia walks in, he says he is worried about his attraction to her. Olivia is there and she tells him to take Lea out for a romantic dinner and he will feel better. He says he will tell Lea about Cintia, Alex and Olivia tell her no.

Shaun goes to speak to Rio’s fiancé and apologizes, he says Rio is going into surgery soon and he says he hasn’t been answering his phone. Shaun tells him that Rio must have dealt with a lot of prejudice during his transition, his fiancé says his family doesn’t speak to him. Shaun says, and now he is alone.

Audrey tells Claire to stop telling people that she has PTSD, she fought for her job and she doesn’t plan on saying it to anyone.

Time for Zora to head to pre-op, but she cancels and wants to be transferred to a different hospital. She believes she was racially profiled into heart failure. Claire is shocked.

Rio is heading into surgery, his fiancé is there and says he is sorry, he loves him. Rio says he can’t see him. Shaun says he has lost his peripheral vision, they cannot perform surgery. Audrey drops by to see Rio, she tells him they can go back to the original plan to terminate the pregnancy, then the tumor will shrink on its own. Rio says he is willing to take the risk of a more
Shaun is with Lea, he tells her he is having thoughts, he has a work crush on Cintia. Last night he dreamed that he was kissing her. She says she is not mad, just a little surprised and that is ok. She says she is still attracted to other guys sometimes. Shaun asks what if they are attracted to other people because there is a problem with their relationship. She says she doesn’t think they have anything to worry about.

Aaron stops by to see Zora and apologizes for her experience, and he doesn’t recommend that the transfer. Aaron goes to see Claire and says Zora is going to stay on one condition, that she was not on the team.

Rio is in surgery, there is an air leak, Audrey is in charge and she directs the team after a short pause.

Zora is in surgery, Claire is not permitted inside but she is watching from outside. Her cardiac output is low, she is having third-degree heart block. Claire makes a suggestion of what to do.

Lea sees Cintia in the cafeteria and takes notes. Lea tells Shuan that Cintia smells like cinnamon, and gives him other things about her and that he knows she wouldn’t like.

Audrey is back in her office, she is looking at a prescription her doctor gave her for PTSD.

Rio is awake, Audrey is there and she says they did great, they got all the mass and she should expect to have a healthy pregnancy. Claire goes to see Zora, she says she wanted to know if she is ok. She says Dr. Andrews told her she is the one who figured out how to save her. Claire says when she got to med school people thought she was a black girl on financial aid, she worked so hard to prove them wrong, that she wasn’t who they thought she was and that she deserved to be there and she fit in. And, when Zora came into the air, loud and messy, she saw everything that she tried not to be and it made her angry and she is ashamed of that and really sorry. Zora says she used to be that way, but she got tired of trying to make white people come through.

Cintia sees Lea and Shaun leaving, she asks Shaun about his surgery and he handles it well.

Audrey tells Alex and Claire that she has started taking meds for PTSD, she is not ok, but she is working on it.