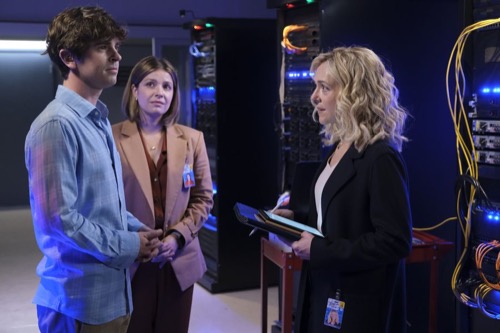 Tonight on NBC their new medical drama “The Good Doctor” airs with an all-new Monday, October 11, 2021, episode and we have you The Good Doctor recap below. On tonight’s The Good Doctor season 5 episode, 3 called, “Measure Of Intelligence,” as per the ABC synopsis, “Shaun confronts Salen (Rachel Bay Jones) about the many changes she has implemented since coming on at St. Bonaventure, and Glassman is forced to accept his new role at the hospital.”

In tonight’s The Good Doctor episode, the episode begins with Lea, she wakes up and Shaun is in the living room making wedding plans, he couldn’t sleep. She tells him that he knows change is hard for him, but she has seen him adapt before. He says the supplies in the hospital are now inferior.

Audrey wakes up, she tells Mateo that she doesn’t want to supervise him, she has enough on her plate, make it work. He tells her that he has handled trust fund donors and dictators, he can handle Andrews, not to worry.

A trauma patient comes in to emergency, Shaun evaluates the man’s condition, Asher is there and he is really impressed. Shaun tells Jordan and Asher that the new soap is terrible and the hand dryers are too loud. He tells them that he is going to confront Salen.

Marcus meets with a patient, Jenna, she has a device that was implanted into her skull two years ago and it gave her, her life back. Now, the company made the implant wants to turn it off and they need to remove i.t Alex, Marcus and Mateo meet to discuss the case, Mateo says it is evil, Marcus says it is capitalism. They throw ideas back and forth on what they can do for the patient.

Lea is mailing the invitations that Shaun finished, she sees one for Marcie Murphy and puts it back in her purse.

Salen asks Marcus, Mateo and Alex if they passed their surgery through legal, it has never been done before.

Next, Salen tells Audrey that they can’t do surgery for the man who came into emergency, he doesn’t have adequate insurance.

Shaun goes to see Aaron, he is not there, but he leaves a message with his secretary that Aaron needs to change things back to the way they were before.

Marcus goes to see Salen and tells her that her pushback made him think about things differently. He shows her xray images of Jenna’s brain before the surgery. They might be able to do the surgery with lasers and it will significantly reduce the risk. She thanks him for coming to her.

Lea and Morgan are in the kitchen and tells her that there was an invitation to Shaun’s mom, who he has spoke to his mom died, and she didn’t mail it. She doesn’t want Shaun melting down at their wedding. Morgan tells her to stop coddling Shaun.

Audrey goes to see Aaron at his home, he hasn’t been answering the phone. She says she has an issue with a patient’s insurance company and nees his help. He gueses that she wants to do everything for a patient and Salen won’t do anything. He tells her that he is defeated.

Lea goes to see Shaun to talk to him about the invitation for his mother, but he is so agitated about the changes that Salen made.

Marcus goes to see Jenna and tells her they are going to turn off the implant while she is having a seizure to take a look at her brain, to help them figure out the safest surgical approach. In surgery, Shaun is complaining about the supplies to the surgical team.

Marcus, Alex and Mateo are discussing Jenna’s case, Marcus tells Mateo that they will do his surgery and he will get Salen to support it.

Shaun goes to see Aaron and finds him stomping in grapes, he invites Shaun inside the barrell to do it with him. Shaun feels really uncomfortable inside and gets out, he tells Aaron that he doesn’t like it and he doesn’t think Aaron likes it either. He thinks Aaron misses his job.

Marcus goes to see Aaron who is doing some abstract painting and Marcus tells him that it is a cry for help. Aaron tells him that If he has a problem with Salen, he can handle it because he is an accomplished professional.

Audrey goes to see Salen and tells her they are not adversaries, Salen tells her off about going to see Aaron and have him call the insurance company.

Marcus tells Salen that the test on Jenna didn’t go well but he still thinks that they should go ahead with Mateo’s surgery. He says that everyone is not on board with her changes in the hospital. She says she will back Mateo’s surgery and tomorrow they are both on knee replacements. Meanwhile, Sean is getting ready for surgery and can’t take the new fabric on his skin, he is breaking out. He tells Audrey that he is going to go change. While he is in the change room, someone uses the hand dryer and he starts to freak out when it won’t stop.

Shaun goes to see Salen and tells her that she is making changes to save money, not to help people and she is wrong. She agrees to put the soap and paper towels back and he can wear his old scrubs. Shaun arrives in the operating room, he is happy to be wearing his old scrubs.

Lea goes to see Aaron and finds him planting mammoth sunflowers. She tells him that she is there to speak about Shaun. She tells him about the card that was for his mom. She asks him if she is being unfair, paranoid. He tells her he won’t help, he is going to plant his flowers.

Marcus, Alex and Mateo are in surgery, Mateo thanks Marcus for handling Salen. Jenna comes out of surgery, she is fine and is able to speak.

Shaun and Lea are out for drinks and she tells him that she didn’t mail the card to his mother, she didn’t want any problems. In the end, Shaun agrees with Lea to not have her there. Jordan and Asher are in the same place with them, the two are singing karaoke and having a blast.

Audrey and Mateo are walking out of the hospital when they see a huge billboard with Sean’s picture on it that reads, “some doctors are different, some hospitals too.” Then it has Shaun name and under it, Autism Spectrum. Mateo says he is surprised that Shaun would agree to it and Audrey says she is sure he knows nothing about it.