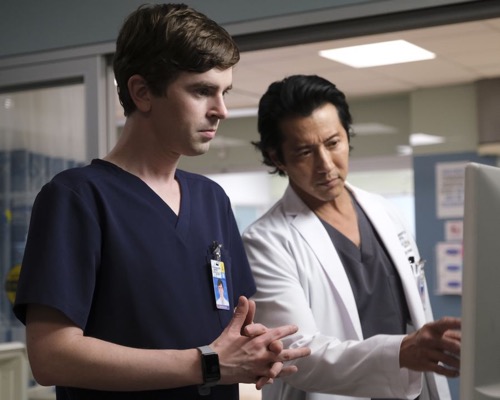 Tonight on NBC their new medical drama “The Good Doctor” airs with an all-new Monday, November 15, 2021, episode and we have you The Good Doctor recap below. On tonight’s The Good Doctor season 5 episode, 6 called, “One Heart,” as per the ABC synopsis, “Dr. Shaun Murphy and Dr. Alex Park must grapple with a life-and-death decision and decide between saving one patient over another. Meanwhile, Dr. Morgan Reznick goes a little too far in her attempt to win Salen’s favor.”

Tonight The Good Doctor’s episode begins with Aaron playing baseball and Lea shows up to tell him that Shaun is struggling right now. She asks him if he is running away, he says no, he is fine and they are fine, go home. Meanwhile, Shaun tells Alex that Lea is gone until Sunday so Alex invites him to a movie and pizza. Asher wheels a man in that fell 30 feet off a scaffolding platform, the man goes into respiratory failure as they try to access his injuries.

Alex and Shaun are looking at their patient’s x-ray, Asher says his pressure is falling. Alex asks if the man is an organ donor, Shaun says it is not relevant, he is not going to let him die.

Alex calls a patient’s mother, Val, he tells her that they have a patient in the OR that is O negative, the heart might fight Ollie, so he wants her to bring him in. She says they are just about to leave for Ollie’s Make A Wish trip, she asks him what she should do, he says to bring him in.

Asher speaks to his patient Brandon’s father, Thomas, before surgery, this is the patient who fell. He wants to speak to his son, but he has been unconscious since the fall.

Morgan does an eye test on a patient, she tells her that she has deficits in her peripheral view, according to the test she is going blind.

Shaun is in surgery, Asher and Audrey are there as well and they are operating on Brandon.

Salen is eating lunch with Marcus, she is eating crickets taco, she tells him they are high in protein. Marcus reluctantly takes a bite. They talk about problems in the hospital.

Aaron is at a bar ax-throwing with his friends when Lea walks in and he asks her when she is going to stop stalking him. She tells him that she omitted some of his negative scores so his customer feedback scores would go up because he was unhappy about his scores. He tells her it is her mess, her responsibility, to go home and clean it up.

Brandon’s bleeding has stopped, but he is in a coma. Asher goes to speak to Thomas to give him some news on Brandon. He tells him that his son is in a common, they are trying to relieve the pressure on his skull so his brain will recover. Given the extent of his injuries, it probably won’t recover and will progress to brain death. Thomas says he was going to call him this week so they could work through some stuff, they haven’t spoken in two years.

Thomas tells him that his father must be very proud of him, Asher says his father wanted a straight rabbi, he failed at both. Thomas just wants to speak to his son again, Asher promises that he is doing everything he can to make that happen.

Morgan goes to see Salen regarding a proposal that she gave her for the contract, Salen says it is too expensive.

Ollie is back in the hospital with her mother, Alex is there and talking to her when she passes out.

Shaun and Asher are looking for a solution for Brandon, Alex walks in and asks Shaun if he has spoken about organ donation. Shaun gets angry and tells him to go away, or he will report him.

Morgan speaks to her patient, she tells her that she found surgery to remove the tumor from behind her eyes but it will also be able to save 60% of her vision.

In the operating room, Audry talks about organ donorship because she thinks their efforts are futile. Shaun doesn’t want to hear it, his new idea has a 1% chance of saving Brandon. Meanwhile, Alex has to go see Ollie’s mother and tell her there is no heart after all.

Alex is upset with Shaun, he tells Shaun that his hail Mary surgery didn’t save his patient, but it just killed him.

Shaun thinks back to the conversations he had with Aaron and then decides it is time to let go of Brandon. He goes to speak to Thomas and he tells him that they can save his son’s heart, donate it to someone else. Asher tells Thomas to go speak to his son, if something needs to be said, then it needs to be said. Thomas has his last words with his son, says his goodbye. Brandon’s heart is given to Ollie.

Salen gives Morgan Aaron’s office, she tells her that she has earned it.

Marcus pours a glass of tequila for him and Salen, he tells her that worms have more protein than crickets.

Shaun and Asher give Thomas a piece of paper that shows where Brandon’s organs went. There are 63 people who Brandon helped.

Asher goes home and he opens some letters that his father sent him that he had never opened.