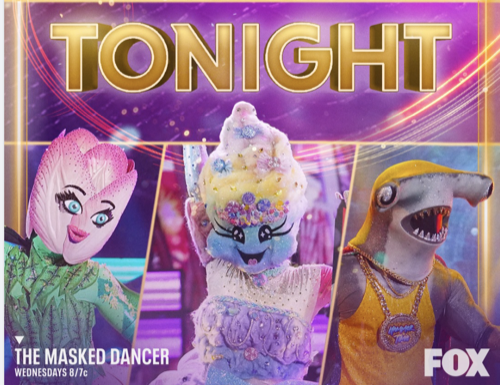 Tonight on FOX The Masked Dancer airs with an all-new Wednesday, January 27, 2021, Season 1 Episode 5 and we have your The Masked Dancer recap below. On tonight’s The Masked Dancer season, 1 episode 5 called “Super Six,” as per the FOX synopsis, “The three finalists from Group A and Group B come together for the highly anticipated Super Six episode. Comedian Whitney Cummings joins panelists Ken Jeong, Paula Abdul, Brian Austin Green, Ashley Tisdale, and host Craig Robinson to play along on television’s favorite guessing game.”

In tonight’s episode of The Masked Singer the show opens and Whitney Cummings joins the panel this evening when the super six perform. We start with Cotton Candy, who fell in round one but came back and knocked it out of the park in round two. Tonight, Cotton Candy is dancing to “Great Balls Of Fire,” by Jerry Lee Lewis.

Panel Comments: Whitney: “That was dazzling, she could fly. She could be a professional dancer or a TikTok star. One that can hit the notes, everything was popping. You feel like an ice skater to me and Kristi Yamaguchi came to mind as well. But then I was thinking you were so effortless in the way you fly around, I started thinking cheerleaders, I think is Gabi Butler. Ashley: “Based off the first time we saw you I thought you were a figure skater, Tara Lepinski.

That performance convinced me even more that you are an ice skater. I feel like you have been in the Olympics and the five golden balloons, I feel like that could be gold. And you said you can’t do what you normally do in heels, so maybe in skates.” Paula: “I’m going in a whole different direction. Last time I thought it was Jenna Dewan. Now I’m thinking gymnast Simone Biles. I believe every gymnast knows how to dance and a lot of gymnasts take ice baths.” Ken: “I totally disagree. I am thinking outside the box. I saw the five balloons and what about gold records, like JLo herself, Jennifer Lopez.”

We move on to an exotic bird, she says she has been made fun of before for her dancing. But when the music began, she found her rhythm. Exotic Bird dances to “Rush,” by Lewis Capaldi feat. Jessie Reyez.

Panel Comments: Whitney: “That was really emotional for me. I did well up a little bit, I am so proud of you. The rose tattoo, I was getting Dita Von Teese.

Ashley: “The tattoo in your clue makes me think of Kat Von D. Going back into other clue packages, I’ve seen a lot of beauty references. Kat has an entire empire, she has beauty and a perfume line, and she just had a baby. Ken: “It could be my friend Kate Upton, has a similar height. Paula: “You had a sense of confidence that I haven’t seen in your earlier performances. And, you are improving every time we see you. Brian: “I sense you are more of a dancer than you thought you were. I feel I picked up early on in your performances that you are naturally a very sensual kind of person but you were a little uncomfortable with what you were doing, but now you are coming out of that. I think you are a model, Ashley Graham.”

Ready to burn up the dance floor is the Sloth, this show has made him break out of his comfort zone. Every week he plans on doing a new dance style. The Sloth is dancing to “Ain’t That A Kick In The Head,” by Dean Martin.

Panel Comments: Whitney: “What a thrill, I haven’t seen your other performances but you have an incredible stage presence. I picked up a little athleticism, with your hips and your knees.” Paula: “There is so much Broadway showmanship on that stage. I am in awe of you, the pirouette turns in a costume like that.” Ashley: “I have gone through a journey with you from Jason Derulo to Will Ferrell but based off this performance I think you are in a Broadway movie, one person who has three kids, Sasha Baron Cohen.” Ken: “You are the front runner of this show right now. I know exactly who this is, Bradley Cooper, he played Elephant Man on Broadway.” Brian: “Because of the way you carry yourself, your sense of timing, I think you are John C. Riley, who has a dance background.”

Hammerhead Shark says he may not be the best dancer but he doesn’t want to go home. Hammerhead is dancing to “Don’t Let Me Be Misunderstood,” by Santa Esmeralda.

Panel Comments: Whitney: “That was intense, I am feeling a lot of feelings but I feel strongly that you are not a trained dancer. And, that is what is so beautiful about you. You are an actor.” Paula: “You are so exuberant on stage, and I think you are someone who is younger. You love working out, but they could be fake mistakes. In the last clue package there was a microphone and a mic and that is why I went with Mike the Situation, but I feel it is someone more youthful, David Dobrik.” Ken: “I’m getting Jersey Shore vibes. I still think this is someone who is an entertainer and last time I thought Ryan Seacrest, now the Jersey Clue, this may be Pauly D. and he has a residency in Las Vegas.” Brian: “I think this is someone who is fearless, I think this is the Situation.”

Tulip enjoys competing, but since being on the show she is falling love with performing again. Tulip is dancing to “Thank U, Next” by Ariana Grande.

Panel Comments: Whitney: “I keep thinking you are such a good dancer, I think you are Julianne Hough.” Paula: “We all recognize that you have training, I saw ballet training. Beautiful leg extensions, you were born to perform, that’s for sure.” Brian: “I saw a lot of gymnastic, coordination and moves. I know you are on TIkTok, and I stick with Simone Bias.” Ken: “I still think this is an actor and a trained dancer, I thought this was Heather Morris, now I think it is Sarah Hyland.”

The Zebra says he had two left feet before he was the zebra, and the mask freaked him out because he is claustrophobic. The Zebra is dancing to “Mi Gente,” by J Balvin & Willy William.”

Panel Comments: Whitney: “I think you have years of comfort from being on stage, everything seemed so effortless for you. I thought you were LL Cool J.” Paula: “You are not the Zebra from last time or the time before. You blew me away tonight, well done. I still think it is Floyd Mayweather. “ Brian: “You have amazing footwork, I noticed that, you are used to moving your feet. I think you are Oscar De La Hoya.

The Hammerhead is Vinny Guadagnino from the Jersey Shore.