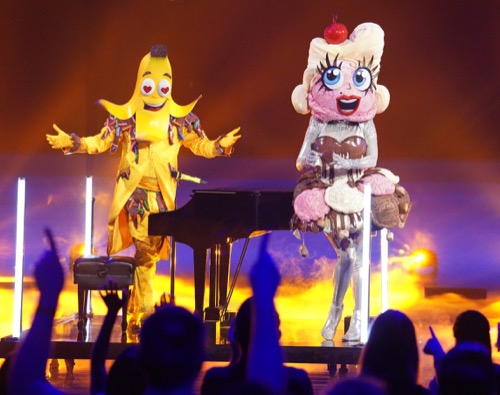 Tonight on FOX The Masked Singer airs with an all-new Wednesday, October 6, 2021, Season 6 Episode 5 and we have your The Masked Singer recap below. On tonight’s The Masked Singer season, 6 episodes 4 called “House Party,” as per the FOX synopsis, “The “Group A” members return, and a new wildcard enters the game.

In tonight’s The Masked Singer episode, tonight’s theme was date night. Group B was up to perform and up first was Banana Split. They were the duo. The two of them have performed countless times before and there plenty of hints. They baked together in the package. They delivered a plate with the word “nothing” on it. The judges all thought they were either a married couple or some other famous duo and so their performance tonight perhaps held the biggest clue. They performed “Cry Me A River” by Michael Bublé. They performed that song like legends. They sounded great and very talented. Which led everyone to believe they were singers/pianists in real life. There was something called speed dating tonight where the judges got to ask the performers questions and the duo revealed they would like to party and that they’re well-known. And they also chose Nicole as the person they would date out of all the judges.

Next up was the Cupcake. The Cupcake revealed she was a hopeless romantic. She also said she was black and that she was married a few times. She’s married now. Her husband and her were very happy. She chose the song “Finesse” by Bruno Mars because it best described her and her husband. The Cupcake’s voice tonight fooled everyone. No one knew who belonged to and the hints weren’t helping. The Cupcake said she would best connect to Nick because they both have double trouble. Nick pointed out he has twins. The Cupcake could also have twins in the family. Someone thought she could be Tina Knowles because she has been married more than once and she has twin grandchildren. And the one bit of advice that Cupcake would give to herself was to date and not marry.

The Queen of the Hearts was next. She revealed she was single. Her southern accent was thick and still she decided to perform a French song. She performed “La Vie En Rose” with perfection. She must be a trained singer and she must know French with the way she was able to pull off that song. The Queen of Hearts also revealed a love of books. Out of the judges, she chose Ken for her date. The Queen of Hearts also revealed a connection to the Rock and so Robin thought she could be Ashley Judd. Nicole on the other hand pointed out Ashley wasn’t one of the judges that sing normally. She also suggested the Queen of Hearts could be Miley Cyrus. Miley is both southern and currently single although no one knew how to connect her to the Rock while Ashley Judd has at least been in a movie with him.

The Mallard was next. He Mallard also has a southern accent. He revealed he met his wife in fourth grade and that he fell in love with her even back then. The Mallard’s clues were all about a date on the lake. There was sweet tea. Which could just be another sign of how southern he is. His wife was there tonight and she wore a mask but she was white or at least light-skin with short brown hair and so that helped as well. The Mallard also revealed tonight that he can rap when he performed the song “My House” by Flo Rida. The Mallard somehow managed to convince Robin that he could be Mario Lopez with a comment about dimples and so the Mallard really does have everyone stump. No one could guess who he was. They all thought he could be a country singer until tonight and now they don’t know.

Next up was the Caterpillar. The Caterpillar was a man. He chose that persona because his life has been about metamorphosis and he has gone through a great bit of change. He was a troubled kid. He lived in his car for a while. He’s also been to jail. Caterpillar chose the song “If I Were A Boy” by Beyonce. He has a great voice. He has a great falsetto. He also gave a shoutout to Ken at the end of his performance. The Caterpillar came out of the gate swinging with his performance and so a lot was feeling he might be a boy band. Robin thought it was Howie D. Ken thought it was Aaron Carter because he remembered the Caterpillar said he went to jail. Jenny was also thinking Backstreet Boy because she thought the Caterpillar could be AJ. There was a BB sign in the clues package. And the way the stage was arranged during the performance showed that Caterpillar has done this before.