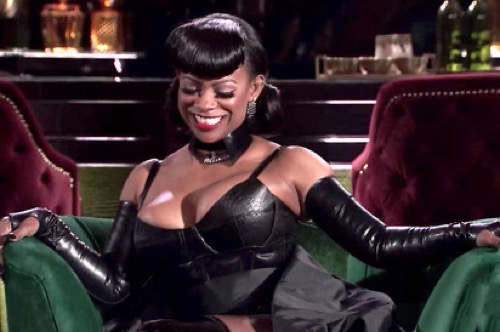 Tonight on Bravo The Real Housewives of Atlanta airs with an all-new Sunday, April 25, 2021, season 13 episode 19 and we have you The Real Housewives of Atlanta recap below. On tonight’s RHOA season 13 episode 19, called, “Reunion Part 1,” as per the Bravo synopsis, “The ladies revisit the season’s hottest moments; Drew and Kenya hash out an online feud; Porsha’s activism is highlighted; Ralph finally addresses who, or what, was in Tampa.”

In tonight’s RHOA episode, the ladies are all getting ready for their reunion. The theme is the “dungeon” as the ladies take the stage in mainly all black leather with Andy Cohen. He says hello to everyone. They get right into, starting off with how they all gained weight. Kenya shares that she has lost a lot of weight, socially since having her breasts reduced. Andy asks her about possible surgery on her butt. She says no, she just lost weight. Porsha shares she gained a lot of weight, even asked her assistant to buy a whole ham. Yes, she isn’t really a vegan.

Andy gets into Porsha’s work for several causes. He is proud she has been using her platform for the greater good. Kenya addresses how she has been left out. Porsha and Kenya get into a small dispute, accusing one another of not being better for the greater good. Andy switches gears, asking Porsha why she kicked Dennis out. She doesn’t remember. They are now working on just being a family. Andy asks Kenya about her divorce.

Kenya admits she was asked for alimony and then Mark took back his request. She has filed for divorce since. Cynthia and Kandi have always wondered why Kenya stays in limbo. She needs to work on her happiness. They then ask Drew why she talks about Kenya’s marriage all the time. She denies it. Drew brings up how Kenya called her astray. Kenya then calls Drew out for having her own family problems with the father of her child in jail. Drew tells Kenya her ex isn’t in jail.

Andy addresses Kenya wearing a Native American costume for Halloween. They get into a fight about how she asked for forgiveness but doesn’t extend the same to anyone else.

Andy switches gears and brings up how Drew’s husband Ralph was sneaky about going to Miami. He is hiding something. They table this and get into how Drew and Ralph were a team when it came to encouraging her son to have a relationship with his biological dad. Kandi admits it made her teary-eyed.

Kandi shares that she won her case against her daughter’s father when it came to child support. Her daughter wanted her to do this. This leads to Drew and Kenya fighting over a tweet Kenya retweeted that was below the belt for Drew.

Andy asks Ralph about him taking off to Miami. He says he needed time to relax. Kandi doesn’t believe this. Ralph says she had time to relax when the ladies had their night with Bolo. Drew is fine now since her husband told her the truth during counseling. They get into how Kenya is inappropriate when she sees Ralph, flirting and staring. Kenya denies any of this.

The ladies take a break. LaToya is in a hotel room when an assigned drew’s comes in and offers her Vitamin C. Later when they take the stage again for the reunion, LaToya comes out and goes right at Drew.