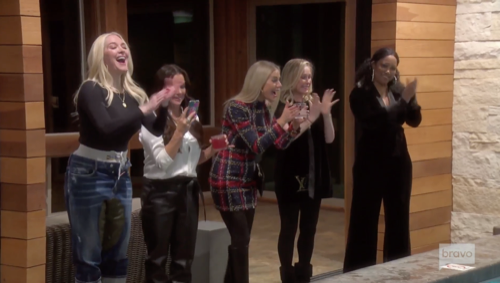 Tonight on Bravo The Real Housewives of Beverly Hills airs with an all-new Wednesday, June 9, 2021, season 11 episode 4 called “Overexposed,” and we have your RHOBH recap below. On The Real Housewives of Beverly Hills season, 11 episode 4 as per the Bravo synopsis, “While in Lake Tahoe, Crystal bares it all — but Sutton is not having it. Meanwhile, a late-night admission from one of the women strikes Kyle as odd.

Dorit makes certain denials that no one takes at face value, and Lisa’s persistence brings Garcelle to her breaking point. Erika stuns her friends with news about her husband, leaving them confused and completely in the dark.”

In tonight’s The Real Housewives of Beverly Hills episode, the women were all in agreement. They believe Sutton has an underlying issue and that’s why didn’t take the joke at dinner well. They also think it’s unfair how much she blamed Crystal. Crystal was the first to tell her about the joke and she asked her to keep it secret because the joke was on Kathy. It wasn’t on Sutton. Sutton however chose to get offended and she’s still offended.

Sutton keeps a list of all the names she’s called. She added sensitive and paranoid after the dinner with the girls. Sutton talked with Lisa as well as Kyle. Kyle told Sutton she needed to apologize to Crystal and Sutton didn’t want to do it because she didn’t feel she had anything to apologize for. She returned Crystal’s coat after their fight. After Crystal told her to chill.

Both women wanted to put that behind them. They each just wanted to enjoy the rest of their vacations and so they traveled with the rest of the women to the boat they hired. Boat rides don’t really have a nice rep with the real housewives. Some boat rides have been great and others have been terrible. This trip started as great.

They were all relaxed and then someone asked Sutton if she was okay. Sutton claims she was fine. She was a bit standoffish and she didn’t want to group with the others. She set herself apart. Which just made everything worst as the trip went on. Sutton reaches out to Crystal and she told her she wanted to clear the air and that what Crystal called her was uncalled for.

Crystal called her crazy. She’s still calling her crazy and she explained to Sutton that everything she shows her proves she’s an untrustworthy person. It was also clear that Sutton had been holding back. Sutton admitted to Crystal that moving out of her home had been demoralizing for her and so she apologized for getting Crystal caught up in her craziness.

Not that she’s willing to admit she is crazy. Sutton was just going through some issues and she asked Crystal to forgive her but Crystal said moving is not a reason to be crazy. She still holds to the fact that Sutton was crazy. Sutton acted way out of bound over a joke and she’s doing that again with her moving. She should just apologize and ask if they can start over.

Crystal later didn’t show up for dinner. She stayed in her room and that created even more of a divide. Crystal had checked out. She hadn’t wanted to give Sutton a second chance and she missed the conversation about who has had work done. Everyone suspects Dorit had a nose job.

She hasn’t revealed if she has or not and so the suspicion remains. Crystal is in her room also meant she missed out on the important conversations. Sutton apologized to the table. She told them that they hadn’t deserved that behavior from her last night and that she was going to self-reflect. The table happily took her apology. They also moved on to different discussions. Like the one between Lisa and Garcelle.

Lisa also talked at the table. She reminded them that she’s been called the worst friend in the world and that hurt because she couldn’t blindly support Denise. Lisa compared her situation with Denise to what happened with Lisa’s husband Harry and his friend. His friend raped a woman. He went to jail for it and their other friends told Harry that they should visit him in prison to support him. Only Harry couldn’t do it. Harry couldn’t support a friend as that and Garcelle understood but she doesn’t think that was like the situation with Denise at all. Garcelle though sometimes it was better to say nothing. Lisa’s problem is that she never takes that opportunity and she always said something that would get her into trouble.

Which is what she did at the dinner table just now. She shouldn’t have compared apples and oranges with her situation with Denise. Denise had needed support. Lisa didn’t give that and if anything she was leading the charge against her. Later, Lisa went swimming. She called for everyone to come in with her and they kept telling her no until eventually, Sutton agreed to put on a bathing suit. The two women went swimming together.

They also put on a show for everyone and they were all off to bed. Crystal came out right as everyone was going to sleep. Crystal came out because she hadn’t wanted to see Sutton and she didn’t run into her. Crystal had apparently been angry about something that happened twenty-four hours ago.

It was when Sutton returned her coat. Sutton came in when Crystal was naked and Crystal covered her nakedness and Sutton said “here’s your coat and enjoy whatever else you’re doing in here”. Crystal said it was creepy and weird. She brought it up to Sutton the next day and Sutton didn’t get why Crystal was so upset.

Crystal even said she felt violated. Crystal was crying as she said and so Sutton apologized for her behavior. She never meant to imply anything. She was just trying to be a good friend by returning the coat. Sutton also offered to pack for Crystal. Crystal said thanks but no thanks and so the women packed for their trip home.

And later Erika sent a mass text in which she told her friends that she considers them to be great friends and that’s why they’re the first to learn she filed for divorce.