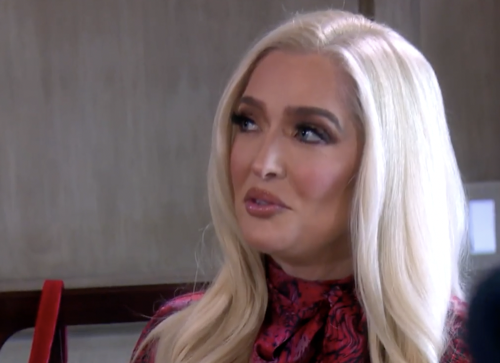 Tonight on Bravo The Real Housewives of Beverly Hills airs with an all-new Wednesday, June 16, 2021, season 11 episode 6 called “The Liberation Of Erika Jayne,” and we have your RHOBH recap below. On The Real Housewives of Beverly Hills season, 11 episode 6 as per the Bravo synopsis, “Erika is back and ready to discuss the elephant in the room. Erika Girardi Speaks Out on Her Divorce: “I Didn’t See It Ending This Way.”

They all wanted to say something when they next saw her. They met up at Sutton’s place. She decorated in Parisian style and she had a Parisian brunch. The girls all showed and Erika did as well. No one asked Erika outright because they wanted her to be comfortable to talk to them and so she addressed it herself. Erika told her friends what happened. She had to let go of her marriage because it was going downhill and her husband refused to work on it.

Her husband was a great legal mind. He was successful and she was the single mom who started out as a cocktail waitress. She didn’t know to get him to bend. She also was telling herself how lucky she was that she sometimes pretended not to see the bad sides herself. Erika ended up feeling like she was complaining over nothing and that she should shut up and marriage shouldn’t let anyone feel like that. Erika had to get out.

She got out and she took several pieces of furniture with her. She now has a rental in which she decorated with her furniture and so it’s just the legal fight left. Erika and the rest of the girls knew that it would get ugly with Tom being a lawyer and knowing Tom he’ll have a team of sharks protecting his interests.

The girls asked about the house she left. Erika said it was never her home. She was the third wife to live in that home and so Tom can have it. He’s already proven he’s not leaving that house. He’ll probably move in the fourth wife into that house and so Erika had no problem with letting it go. Now in terms of finances, Erika is going to shoot for the finances. She’s grown accustomed to a way of life and she’s going to want to continue it.

Erika was talking to the ladies about what’s in store for her and she mentioned she bought a new Range Rover for herself. She was also getting advice from them when Kyle and Dorit snuck off to deal with their own issues. There was a minor spat on the plane back home and it had left the both of them feeling a type of way. And so they apologized about it tonight.

Kyle and Dorit made nice. They were sister-like in the way they treated each other and so it was easy to move past their own argument and to focus on someone else. They’ve both spoken to Crystal. They’ve each heard Crystal described Sutton coming into her room while she was naked.

Crystal called it weird with Kyle and then called it a violation with Dorit. Both ladies thought it was just a misunderstanding and that it would clear itself up in a few days. Kyle later spoke with Sutton. Sutton had invited her to her mammogram because she had been nervous and she couldn’t do it alone. After she had her mammogram, Kyle brought up Crystal. She told Sutton that she has to nip the gossip in the bud and Sutton thought she already had.

Sutton did talk to Crystal. She thought they cleared the air and so to find out that Crystal is still talking about and using big words like violation had Sutton stumped. She didn’t mock Crystal or laugh at her. She returned a coat and walked in on Crystal naked. That’s all it was. Sutton said she would talk to Crystal again and that had Kyle at ease, but these two weren’t the only ones talking. Garcelle is now using a matchmaker.

While Garcelle was doing that, Erika was talking to Lisa. Erika admitted that Tom ran the marriage and that he wasn’t always kind. He once told someone at dinner that if they could afford Erika that they could have her. Erika hadn’t found that funny and if anything it made her feel bad that her husband would say that about her. Erika, therefore, hid her divorce. She drove Tom to work like she normally does and then she drove back home to pack and moved into her rental the same day.

Erika is happy to be in that rental. It wasn’t as big as her other house and she didn’t have a place to put all of her clothes but she would still that over being disrespected by Tom. And so Erika is happy and she’s taken a break from men but not from the special sex oil that Kyle had given her because she later showed up wearing it and she was lit.

Erika also showed up in a short skirt and heels and she didn’t care if her basement was out there for the world to see. Erika had dinner with friends at Crystal’s. Crystal and Sutton used the dinner to discuss what happened in Lake Tahoe. Crystal claims she doesn’t want to bring it up and so Sutton told her to just stop talking about it. And to stop telling people she’s a maniac or that she violated her.

Sutton could be kookie but she’s harmless.