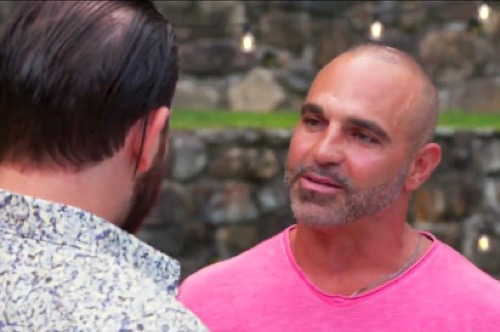 On Bravo TV tonight The Real Housewives Of New Jersey (RHONJ) airs with an all-new Wednesday, March 17, 2021, episode, and we have your RHONJ recap down below!  On tonight’s RHONJ Season 11 episode 5 called, “Kiss My Peach,” as per the Bravo synopsis, “Dolores and David address their relationship while Jennifer’s relationship with her mother worsens.

Melissa and Joe confront Michelle and Jon about the rumor they are spreading, and Teresa throws a wild pool party that ends badly.”

Melissa and Joe go to their vacation house with the kids. It’s Joe’s birthday. They make Pina Coladas while the kids go to the water. They talk about the Evan, Jackie drama. He needs to talk to his sister.

At Jennifer’s, her sister arrives to see her and her dad as well as all of the kids. The kids all go swimming. Jen and her sister and Dad talk about going to Turkey. They talk about their mom and how she also wants to go but their parents have been fighting.

Dolores arrives home. She waits for David. When he arrives, they talk about how she is working on her house. She will continue to do so until he gives her a ring. He was supposed to give her a ring when his house was done. Now, look at them. They sadly see one another. He tells her he would

Teresa shares more about a pool party she is planning. Joe tells her to invite Jackie and makeup with her. Teresa brings up how Gia was doing coke in the bathroom. Joe and Melissa clear up that she was saying that as an analogy. Joe tells her to make it right. Teresa agrees. She has Melissa write a group text, including Jackie. She mentions inviting Michelle. Joe is irritated.

Margaret is making a drink in the kitchen talking to her housekeeper. She tells her how she is writing a book. Her ghostwriter shows up. They get down to business. They talk about everything. She confesses she slept with her bosses when she was younger. She was easily pressured. She talks about marrying her ex Jan. She cries talking about how great Joe is.

Teresa’s ex calls her. They talk about their divorce. She feels like it is the easiest divorce ever. She is getting ready for the pool party.

Margaret gets Joe ready for the pool party. Meanwhile, Jenn is getting ready. She calls her husband and asks him to hurry home. Melissa calls Joe. They wonder if the couple that says Joe owes him money will be there.

Joe and Melissa arrive at Teresa’s. They tell her how Jackie is not coming. She wants Teresa to stuff it up her a$%. All of the ladies and their guys show up. Everyone is dressed up in their best suits, heels, and cover-ups. Dolores shares that she is accepting an award this weekend and plans to have a party after. Teresa won’t be around, she shares.

The guys are talking. Joe plans to confront the man who says he owes him money. Joe gets up and calls the man Jon to come speak with him. Melissa is nervous. Jon’s wife comes to see the ladies. Melissa is angry and confronts her. She tells Melissa it is between their husbands. Joe and Jon shake. They are good. If they plan to work together again they will put it into writing.

Tony the pool guy shows up. Joe doesn’t want him near his sister. The ladies keep doing shots. They get into the pool for some games. Jenn starts drinking way too much. She gets out of the pool and sits on the pool skirt. She can hardly even drink water she is so drunk. Margaret gets up to fix the situation. Jenn falls to the ground after trying to stand. They call Bill. He brings her to his convertible. The guys try to help. They get her in the car. Several feet down the road, she throws up.