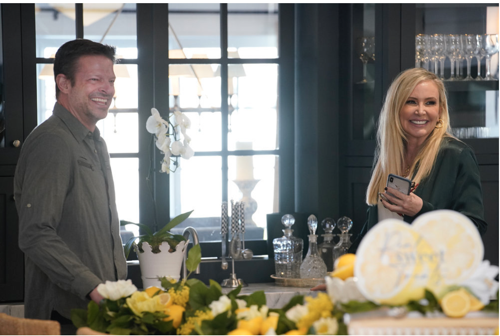 Tonight on Bravo TV the original housewife series, The Real Housewives of Orange County returns with an all-new Wednesday, January 6, 2021, episode and we have your RHOC recap below.  In tonight’s season, 15 episode 13, “Trouble In Newport Beach,” as per the Bravo synopsis, “With the group back in the OC, Shannon preps her oldest daughter Sophie for college while Emily reveals a surprising rumor. As Braunwyn and Sean discuss their marriage problems.

Shannon and John work through their issues from quarantine, but she fears the damage has been done. Later, Elizabeth opens up about her past to Emily, and Kelly questions Braunwyn’s authenticity.”

Shannon’s daughter Sophie is going to college. Shannon is happy for her daughter. She’s also glad to be a part of the process because while her daughter doesn’t tend to worry, its usually up to Shannon to do that. Shannon ordered a expensive headboard for her daughter. She even ordered a second one for Sophie’s future roommate because she said she doesn’t want to create toxicity and so Shannon was going all out. She ordered everything. She also questioned Sophie’s choices when Sophie did order stuff. Sophie ordered a bed spread and Shannon complained that it looked like vomit. Sophie ordered pillows and her mother ordered even more pillows because she said Sophie’s pillows look ugly. And so you see, Shannon lives to take charge.

Shannon likes it that way. She was the one ordering all the basic stuff that her daughter might need and she had also created a Covid-19 package in case her daughter began feeling symptoms. When it comes to her daughter, Shannon was on top of everything. It was a little different when it came to Shannon herself. Shannon doesn’t always look out for her own best interest. Take her will for instance. Shannon hasn’t changed her will since her divorce. She only realized now that she needs to create a trust for her children in case the worst was to happen and she sure as hell didn’t want to leave all of her money to her ex-husband. And so she was going to get on top of creating a new will the moment she was done with setting Sophie up for college.

Then there’s Braunwyn. Braunwyn is married to a man who loves her and its been hard on them since the lockdown began. Problems that weren’t there before were suddenly rearing its ugly head. Braunwyn has been sober for six months and she thought the rest of her life after this would be easier, but it wasn’t. She’s gotten mean. She knows she’s mean to Sean. She pulls away from him for no good reason and this causes him to try to hold onto her tighter. Which ends up frustrating Braunwyn even more. Braunwyn says she’s caught into a co-dependent cycle that she can’t escape from and she really does want to escape by this point. She doesn’t like her marriage. She doesn’t like who she’s married to and so Braunwyn wants out.

Braunwyn had mentioned to Gina earlier that she saw some unhealthy signs in Shannon’s relationship with John. Both John and Shannon drink a lot. They also argue a lot and so Braunwyn had told Gina that she was concerned. Only she suddenly changed her story when the ladies were on vacation together. Braunwyn had claimed back when they were on vacation that she didn’t want to gossip about a friend behind her back and so she did a complete 180 on Gina. Gina had wanted to discuss Shannon with the others only she couldn’t because Braunwyn didn’t want to talk about it. Braunwyn had felt bad because she thought talking about a friend who was sick was beneath her and so there were limits to Braunwyn’s gossiping. Just not with Gina’s gossiping.

Gina later told Emily what Braunwyn told her. She also brought up how resistant Braunwyn was to bringing up her concerns in a more public way and Gina explained how she didn’t get it. She said she wasn’t gossiping just to gossip. She was talking about Shannon because she was “concerned”. Gina was worried about Shannon’s relationship with John because she knows Shannon wants to find love and she wasn’t sure John was the best guy for it. Shannon must have also had these doubts because she talked to John. She hadn’t seen him in a while what with them being in quarantine and so she was glad when the restrictions eased up because she wanted to talk to him about their relationship.

Shannon was very reactionary with her ex-husband. She doesn’t want to be that way anymore and at the same time she doesn’t want to be horrible to John. She sometimes confuses assertiveness with rudeness. She told John that she doesn’t mean to push him away and that she doesn’t mean what she says after a few drinks. Shannon wants her relationship with John to work. She wants them to have sleepovers again and most importantly she wants to work on them. As a couple. Shannon asked John what he wanted and it seems like he wanted to work on their relationship as well. It was more time will tell with them. Shannon was in a better place after talking to John and so her friends didn’t need to worry about her. They should be focusing on themselves.

Gina still has an ex whose facing charges. Matt was facing a felony for domestic violence and he wanted to fight the charges in spite of Gina not once doubting them. Gina thinks Matt should own up to his truths. She thinks it would be a better lesson for their kids if he confessed to what he did and she hates that he’s dragging it out in court. Gina claims to be concerned for Shannon, but she never once picked up the phone to call Shannon and so she really was just doing for the gossip. She wasn’t doing it out of concern. Another person who’s tricky is Braunwyn because Braunwyn investigated Elizabeth which was really weird and it worked out for Elizabeth because it had been enough to get her to talk about her past.

Elizabeth had been abused as a child. She grew up in a church in a small town and the church was abusive in every way. Both physically and sexually. Elizabeth was molested as a kid and her brother was beaten within inches of his life for being dyslexic. The church apparently believed children with learning disabilities were plagued with demons and so they tried to beat the demons out of him. Elizabeth and her brother Andrew also watched their aunt die right in front of them. She had had an allergic reaction and the church had said that god would heal her. They didn’t believe in taking the poor woman to a hospital. So, Elizabeth has been through a lot. She made an appointment with a therapist that specializes in abuse after the girls trip to the lake and she feels better for it.

Elizabeth also signed her divorce papers. She couldn’t sleep with Jimmy while she was still married and now she’s looking forward to their sex life seeing as she finally single again. Elizabeth remains authentic. Now, can Braunwyn say the same with her husband and her “girlfriend”?