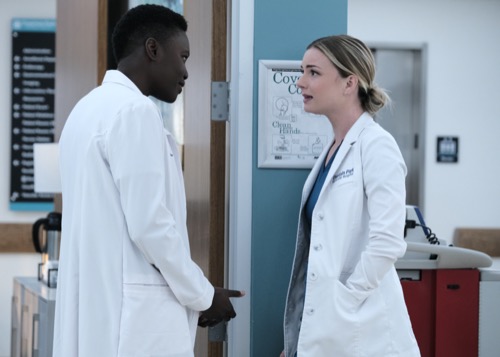 Tonight on FOX their new medical drama The Resident airs with an all-new Tuesday, February 2, 2021, episode and we have your The Resident recap below.  On tonight’s The Resident season 4 episode 4, “Moving On And Mother Hens”  as per the FOX synopsis, “The Chastain staff works together to diagnose a mother-daughter pair who both come in with symptoms that make it difficult to determine their conditions.

Devon deals with an unexpected visit from his mother and Conrad and Nic try to figure out the best time to tell everyone their big news. Meanwhile, Bell deals with an over-eager fan of his show who ends up needing treatment at Chastain and Mina makes a bold move when she realizes her visa is about to expire.”

In tonight’s episode Conrad serves Nic breakfast in bed, he tells her that everything is going to be ok. She tells him that she wants to keep her pregnancy just between them for a little longer. Meanwhile, Devon has someone banging at his door, it is his mother, she surprised him. She looks at him and knows something is wrong, he says he is fine. He had an ER patient with psychosis, he hit a nurse and he went in to help, he should have called security. She tells him not to worry she is going to take care of everything.

AJ and Mina are in the hospital, she surprises him with donuts, he surprises her with a breakfast burrito. He asks what else can he do for her, she says marry her. Her visa is expiring, she applied way in advance, but it was denied. If she wants to stay she has to find a way to renew her current visa or marry an American citizen. AJ says she has to at least buy him a nice dinner first. Then he tells her to breathe, it’s going to be ok, they can make this work.

Devon shows up to work and Conrad asks him what happened to his forehead. Devon says he went for a ride on his bike and hit the curb last night, his mother showed up and he lied to her because he didn’t want her to worry. A woman and her daughter Trinity come into emergency, her finger is crossed right over on the other side, it looks like it is dislocated. Devon works on straightening it out while Conrad speaks to her to distract her. Her mother says this is not Trinity’s first fall, she is losing her balance lately.

Conrad says they will do a full physical and Xrays just to make sure there is nothing wrong. Afterwards, Devon says the mother/son thing is no walk in the park, his mother is texting him with all things she wants him to pick up. Conrad suggests that he set some boundaries, Devon tells him that he is not really looking for advice. He is doing his job, not making any mistakes and anything beyond that is none of his business. Conrad replies that his business is that his friend is upset and grieving. Devon tells him to stop doctoring this.

Randolph tells Kitt that selling Chastain may be off the table. And they might make him the CEO, and even if he were to say yes, Red Rock could still dump Chastain if they don’t rebound financially. Kitt tells him that there is a woman who can’t take her eyes off him, she gets up and sits down beside Randolph, she is a fan of the show and her name is Fiona.

Conrad brings news to Trinity, nothing is broken. She gets off the bed, her steps are uneven, then she grabs her chest and says her heart is a little fluttery that is all. Trinity fainted, Conrad tells her she bought more time in the hospital.

Dr. Bell is walking through the hospital when Fiona visits him again. She says she is curious about employment at Chastain, she is looking for something entry-level and after listening to him on the show, she was inspired. He tells her to go to HR and tells them Dr. Bell sent her.

AJ approaches Nic and tells her that Mina proposed to him, she needs to get married to get a green card, and he needs her to plan the wedding.

Devon bumps into Nic in the supply room, he says he can’t sleep and is taking meds for it, his doctor is out of town and wants to know if she can give him meds for a few days. On his next day off he promises he will go to the doctor. She says ok, she will send three pills to the pharmacy, but if he wants more he has to go to his doctor.

Fiona shows up in Randolph’s office, she tells him that she gave her resume to HR and thought he would want to see it. He looks inside the photo and there are risky photos of her, no resume. She starts to open her jacket, and tells him that she knows that he wants her. Kitt walks in, Randolph tells her Fiona is acting psychotic and he called security. Fiona freaks out and starts to attack Randolph. She is trying to bite him when security shows up and Kitt injects her with something to calm her down.

Devon’s mom calls him and tells him that his home is lonely, he is lonely and needs a partner. Then she sends him photos of some women.

Nic asks Mina why she didn’t tell her about the possibility of being deported. Nic tells her that AJ thinks this is real, Mina says yes, real and business. Ni asks her if she is in love with AJ. She says the reason she didn’t want to tell her is that she thinks she is also keeping a secret, yesterday she took a power nap in the lounge and she is glowing. Nic admits it is early and she doesn’t want to talk about it.

Fiona went for groceries two days ago and never returned according to her roommate. So far, they can’t find what is wrong with her. While examining her, Randolph sees a huge red mark on her thigh, Devon examines it and he says it is a mass. They do a test and find that she has a tumour right above her kidney, deep towards her spine. They need to operate right away.

Devon and Conrad are in Trinity’s room, her mother makes a comment about Devon’s coffee, hazelnut and Trinity says she can’t smell it. Her mother asks if she could have COVID, Conrad says the loss of smell can be many things. All of sudden, mom faints too. Trinity says when they went to protest for George Floyd, they tear-gassed them all. Conrad says it could be the tear gas.

Fiona’s mother is in surgery, they have to put a stint in her heart.

Devon goes in to see Trinity, her mom is in surgery and while they are waiting, they are going to perform a few more tests on her. Trinity says it is her fault.

Mina tells AJ that she spoke to an immigration lawyer, if they get married it will raise flags. If there is an investigation, she will get deported and not be able to return to the country. AJ says the marriage will be real unless she believes it is not real. She says the wedding is off and she will deal with it.

Devon’s mom shows up at the hospital and asks him if he liked any of the pictures that she sent him. He says he can’t deal with this right now, so she says ok we can have dinner together. He starts raising his voice, he says she should have asked before showing up there. Then she tells him that her calls go right to voicemail and when he does speak to her it is brief. This is why she didn’t ask permission to visit. She leaves the food she prepared and tells him two minutes in the microwave, then she walks away.

Conrad gets a text from Nic and rushes out of the room, she is having an ultrasound and wanted him to join her.

Trinity’s mom wakes up, she tells her that the doctor’s fixed her heart and she can go home in a couple of days.

Fiona is in surgery, Kitt says she is lucky that she is young and they caught this early. Kitt tells him that he should take the job as CEO, he can hire a Rockstar plastic surgeon like his stepson Jake. Randolph says the kid doesn’t want to be anywhere near him.

Fiona is awake from surgery, Kitt and Randolph tell her what happened. Meanwhile, Devon gives the drugs back to Nic, and tells her that he should not have asked her, he is sorry. Nic texts everyone into one of the rooms and makes the announcement, they are having a baby and It’s a girl.

Devon is home, his mother tells him that she is leaving tomorrow. He says he is sorry that he lied to her, he went to a bar and started a fight with a big guy. He is having a hard time with the loss of his father and thinking about what he could have done differently. He asks her to please stay, she agrees.

Mina tells AJ that she is sorry, she made a mistake, she shouldn’t have proposed to him the way she did without doing the proper research. She asked him the impossible and he agreed without hesitation and she appreciates that. She is in love with him. He tells her that she is not going to be deported, he is not going to let that happen and he loves her too.

Just when Randolph is going to accept the offer of CEO, the offer is no longer on the table and Red Rock sold Chastain. The buyers are developers, they are turning Chastain into luxury condos.