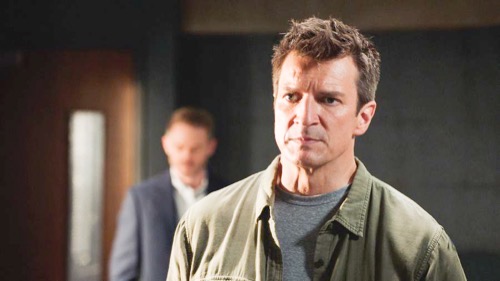 Tonight on ABC their new series The Rookie airs with an all-new Sunday, January 3, 2021, season 3 episode 1 called, “Consequences,” and we have your The Rookie recap below. On tonight’s The Rookie season 2 episode 20 as per the ABC synopsis, “Nearing the end of his training, Nolan now faces his biggest challenge as a police officer yet when he must come to terms with the choices he has made in pursuit of the truth.”

Grey calls Nolan and tells him that Nick Armstong is on the way to the hospital and said that Nolan tried to kill him and he is on Darien’ payroll. Nolan says Nick is the dirty cop, he killed Erin Cole. Grey says to let him inside so he can take a look around. Nolan tells him that he needs a warrant, and Nolan will get a lawyer. Nolan calls Wesley, tells him that he needs his help, he needs to hire him because Armstrong set him up. Wesley gets up and steps on something, it is a pregnancy test. Nolan starts talking about his job, Wesley say he is trying to keep him out of prison.

We see Armstrong in the hospital, he is still saying that Nolan tried to kill him and there is damning evidence in his house. Harper calls Nolan, there are cops at her front door. He tells her that Armstrong set him up. She tells him that she is looking forward to yelling at him when this is over.

Lopez gets her search warrant, but she tells Wesley to tell Nolan that she is rooting for him. The police arrive at Nolan’s door, Grey handcuffs Nolan.

Wesley is with Nolan at the station, he says that technically he is not under arrest. Wesley tells him that if he is convicted, he could face twent- five years, he has to be quiet and let him do the talking. He says he is a white man, he is lucky, if he was a black man they would have knocked the door down. Wesley says again, that he has to do exactly what he says to do.

Harper is with West, he says that Armstrong says that she took money from the Darien family in exchange for sensitive police information. She says it is false, Armstrong is the one who is a dirty cop and he is trying to blame both she and Nolan. She shows him a video that shows Armstrong is a dirty cop. He asks why she didn’t come to him with her suspicions. She says at the time she didn’t think it was her place to disparage a fellow cop without more evidence. He shouts at her and tells her that it is his job, not hers. He tells her that they are going to tear her life apart, and if they find anything, she is not going to be a cop anymore.

Jackson asks Armstrong some questions who says he gets it, it is tough for them all to find out what kind of cop Nolan is. Once he leaves the room, Armstrong doesn’t look happy.

Chen is in Nolan’s house looking around, she sees some white powder on the floor which leads them to a balcony and down on the lawn, a filled garbage bag. But since it is off property, they can’t give it in for evidence.

Wesley and Nolan are in front of West, he reads him his rights before asking him questions. Nolan signs it and says he will answer all of his questions honestly, completely and without reservation. Wesley doesn’t want him to answer.

Nolan says he left Armstrong’s house when he told him that he had left incriminating evidence over at his house. He says the evidence is in the heater; the team who are searching Nolan’s place finds it. West tells them to go to Armstrong’s place a pull a survellience video of when he Rosalind Darien. Bradford is not sure that he should take Chen with him, but then gives in.

Grey walks in to see Nolan, he comes up with a plan to get Nolan to wear a wire and go undercover to catch Ruben which will in turn get Armstrong.

Chen and Bradford go to see Rosalind, she tries to get under Chen’s skin, Bradford tells her that she is just playing games. Bradford tells Rosalind to knock it off. Rosalind says Armstrong has lasted this long because his contingency plans have contingencies. And, whatever they have already found, there is more.

Nolan gets his wire on and he is going undercover, he exits the police station and sets up a meeting. Nolan gets a blocked call for his meetup. A black SUV shows up and tells him to take off his clothes, they give him replacement cloths to put on, they don’t trust him. They also give him a hood to cover his head.

Lopez calls Grey and tells him that Armstrong’s cell phone GPS puts him at Nolan’s place the day before for over an hour. She is at the cemetery, Armstrong was there for a half hour after wards. She is going to do some digging at his wife’s grave, a few minutes in, she tells Grey, found it.

Rosalind has a cell phone in prison, she calls Armstrong’s room. She tells him that he has made quite a mess and his train wreck mess he made of Nolan is not going to hold up. She tells him that she has revealed information about him and hopes he enjoys prison. Armstrong escapes from the hospital, and Nolan is gone, the police loss the tail when they went through a tunnel.

Nolan is dropped off in a parking lot, Ruben is there and so is Armstrong. Nolan manages to make a run for it, in between parked vehicles. He gets a gun and manages to save himself, but Armstrong is shot dead and he pulls a gun on Ruben. Then, Nolan tells Ruben to dial 911 on his cell phone and drop it on the ground.

Grey tells Nolan that he still has a job, Harper says she failed. Grey says he has given the two way too much leeway. Big changes are being made, the two are going to receive letters of reprimand in their files. In addition, Nolan will be held over in the program for an addition month and have to pass a review board test to advance. Receiving a letter of reprimand as a rookie is very bad, he will never be able to go into any specialized training. Nolan says he is going home, to bed, and in the morning try to earn back what he lost.

Lopez finds out that she has been promoted to detective.

Nolan returns home and can’t believe the mess in his place. He pours himself a drink, the phone rings and it is Rosalind. She tells him that she underestimated him, he won. She says he is calling the prison to confiscate her phone, she says it will be worth it just to have heard his voice.