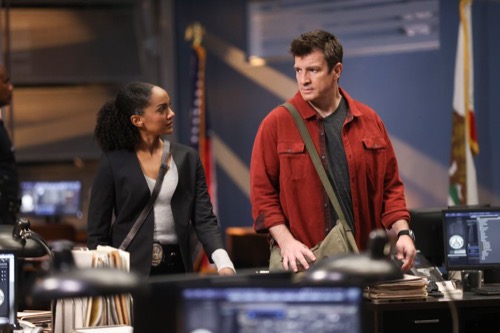 Tonight on ABC their new series The Rookie airs with an all-new Sunday, February 14, 2021, season 3 episode 5 called, “Lockdown,” and we have your The Rookie recap below. On tonight’s The Rookie season 3 episode 5 as per the ABC synopsis,“Officer Nolan is taken hostage by a man with nothing to lose while the station goes on lockdown and races to identify the suspect before time runs out.

Meanwhile, Officer Jackson and his training officer, Officer Doug Stanton, reach a tipping point in their relationship that could end Jackson’s career.”

The sergeant visits West at home. Grey tells West he was issued a blue page and it looks like Stanton is going to get him kicked out. Grey wants to assign him a new TO. West doesn’t want that. He isn’t giving up.

Angela learns that her baby is okay after getting tested early for a possible genetic issue on Wesley’s side of the family. She didn’t tell him she was doing it. Meanwhile, Tom gets confronts Stanton about his training. Lucy intervenes but then gets angry with Stanton as well.

Nolan passes his disciplinary exam. He is thrilled until Grey tells him being a detective is no longer an option for him. Meanwhile, Stanton is shocked West still wants to work with him. He agrees to a fresh start.

Tim, Lucy, and Nolan rush out of the station to find a female Tim and Lucy just booked smashing a rock through a car window. Tim and Lucy take her in. Nolan is called by a delivery truck driver. He runs to see what the man needs. The man has a gun and he is injured. He makes Nolan take off his belt and get into the truck. There is a bomb inside. He handcuffs Nolan inside. He forces Nolan to call the sergeant. The man demands an inmate be released or he will blow the place up. No-one can leave.

Nolan tries to get the man to talk. To tell him why. The man reveals he has cancer and nothing to lose. Meanwhile, everyone in the station is brought to the lower level.

Nolan sees a hole in the side of the truck and peers out. He sees SWAT and more. The man passes out in the front, holding the dead man switch. Nolan screams for him to wake. The man comes to. Nolan uses the whole and metal to send Morse code to Grey. He tells him the man in the truck has a scar on his left eye. They look into possible suspects and find their man.

Stanton pulls up on three guys in the street looking at a car. He tells West they need to send a message, get the bully first, that although there station is down, the police force is still strong. Stanton calls one of the men Esa. West is angry. He intervenes. Stanton tells him he should be fired. West blows up and tells him his dad runs the IA and he is a dead man walking.

Angela digs into the man in the truck with Nolan. Tim and Lucy and Angela all realize he has someone on the inside. Tim and Angela head to confront her. She runs. Harper finds her in the evidence room. Harper aims her gun at her. The woman tells Harper she needs to destroy evidence or her ex will find her. He will kill her. Her prints were taken from a robbery at her work the week before and when they run them, he will find out. She reveals the man in the truck is helping her and the bomb has isn’t real. Grey radios him. But just as Nolan frees himself to get the man, he pulls his gun again. Nolan tries to talk him down. It works.

Nolan heads into the station to applause. Stanton and West see a suspicious car with no plates. Stanton is scared to stop. West might think he is profiling. West tells him it looks legit. They turn around. The men have already parked and gone into a home. Stanton and West head in. West is caught alone and attacked by several men. Stanton walks up on the incident from a distance but hangs back, and doesn’t help. Lucy and Tim arrive. Stanton pretends he lost West. They all run and find him on the ground with full-body trauma.

After a review, Stanton is placed on leave. His camera shows how he stood around the corner of a building, letting West get attacked. Harper and Nolan catch up. Nolan can’t be a detective but maybe TO is in his future. Harper tells him he needs a degree. Looks like he is going back to school.

Grey visits West in the hospital. He tears up with pride.