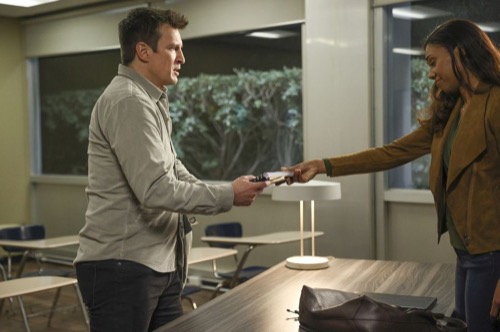 Tonight on ABC their new series The Rookie airs with an all-new Sunday, March 28, 2021, season 3 episode 8 called, “Bad Blood,” and we have your The Rookie recap below. On tonight’s The Rookie season 3 episode 8 as per the ABC synopsis, “Officer Nolan, Officer Harper, and Detective Lopez are assigned to the kidnapping of the son of a criminal court judge who has a long list of enemies who could possibly be involved.”

In tonight’s The Rookie, Nolan arrives late to class. He missed his exam and begs the teacher to let him take it. She makes him answer a legal question first. If he answers right in 24 hours, he can take the exam.

Lucy wakes to a text from Emmett. He breaks up with her by text. Jackson is back to work. His dad wants him to take on a new project. Lucy asks Tim about Emmett and if he said anything. Tim doesn’t talk to Emmett about his feelings. Wes brings Angela some medication for her pregnancy. They talk about her latest case. Wes’ mom keeps texting her about the baby and the family’s money. Wes explains that his mom thinks about it all, including kidnappers who would look for money.

Working their beat, Nolan asks Harper about the legal question he needs to answer. They get called to a nice him out in the suburbs. Angela is there. She is trying to locate a kidnapped man who was being held for ransom. The suspects got the money but didn’t return the man. Angela needs them to interview a man they all know, a lead by the name of Oscar. The same man who stabbed Wes. Angela isn’t allowed to question him. Harper and Nolan head to the prison to question him about how his DNA ended up at the crime scene.

Tim and Lucy’s cop car is tagged. Tim freaks out, acting strange. He calls in for a canvas on the area. Harper and Nolan question Oscar. It seems he has a daughter who is also into committing crimes. They need names of possible mothers to narrow down their suspect. Oscar thinks he may remain all of the possibilities if they take him on a ride. They are forced to take him on the road.

Tim tells Lucy about the possible suspect who tagged their car. The man has been tagging things for years, costing the city thousands. He also tagged a car when Tim was a rookie, making him look stupid as he was 10 feet away.

While Harper and Nolan drive around, Oscar calls old flings and tries to narrow down who had his baby. Meanwhile, Grey talks to Jackson about teaching at the academy. While they work patrol, they see Tim’s possible tagger. Jackson chases him down but has to stop when Grey’s back gives out. Tim shows up, chasing the tagger down. He loses him, gets out of the car, and checks an alleyway. When he returns his car is tagged once again.

Harper and Nolan take Oscar to a diner where they find the woman who had his baby. The woman works at the diner. Meanwhile, the paramedics come to get Grey. Lucy talks to one of the medics who knows Emmett. She asks him out. Jackson laughs.

Harper and Nolan locate Oscar’s daughter. He tells her not to talk. He is going to act as her lawyer since he took some law classes in prison. They learn Oscar’s daughter is the girlfriend of the missing man. They actually teamed to get a fake ransom from his parents. What she learns however is that her boyfriend’s kidnappers already recommended money. It looks like he cut her out of the deal. Meanwhile, Angela is with the missing man’s parents. Someone drops off a pint of blood with a threat they will kill him unless they get a million dollars.

Angela is told the FBI is taking over the case. She is annoyed. They talk Oscar into custody. Lucy vents to Tim about Emmett. He points out that she never talked about him. Maybe he picked up on how casual she was and that is why he broke up. They come upon the familiar tag up high on a billboard and a young woman on the ground. Her leg is injured. It’s Tim’s tagger. He didn’t think it was a woman.

Oscar almost escapes from the FBI but is caught by Harper and Nolan who are waiting for him. They finally get the information they need and move in on the men who have the hostage. They find the hostage who is unconscious.

Tim lets his tagger go on a misdemeanor. Lucy cancels her date with Emmett’s friend. She tells him she didn’t have pure motives. Oscar has a heart-to-heart with his daughter. Jackson tells Grey and his dad to back off a bit. Angela tells Wes she will call his mom about setting up a trust. Nolan tells his teacher none of her answers are good ones and he wouldn’t choose any of them as a fair cop. This makes her happy. She lets him take his test.