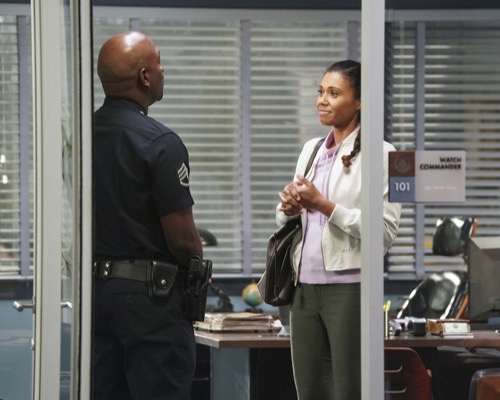 Tonight on ABC their new series The Rookie airs with an all-new Sunday, April 4, 2021, season 3 episode 9 called, “Amber,” and we have your The Rookie recap below. On tonight’s The Rookie season 3 episode 9 as per the ABC synopsis, “An Amber Alert sends the team on a race against time to find a newborn infant who was stolen from a local hospital.

Officers Jackson and Chen work their last shift as rookies as Officer Nolan continues on for 30 more days.”

In tonight’s The Rookie episode, Harper and Nolan bring his teacher on a ride-along. Harper is not happy. His teacher wants to record her ride-along. Lucy and Tim go on their last patrol together.

On their ride, Nolan’s teacher has a lot of questions. Harper is very sarcastic making Nolan uncomfortable. Meanwhile, Lucy talks to Tim about their relations evolving as she ends her training. He doesn’t think it is a big deal. They will still see one another. Jackson teases Angela as they are on their last ride. She wants to eat again. He teases her.

Nolan and Harper are notified of an Amber Alert. The father took the baby as the couple is in the middle of a messy divorce. The dad is a drug abuser. Nolan’s teacher questions the race of the child. Harper is upset. They give equal attention no matter the race. They see the suspect and his truck and begin chasing him. Tim and Lucy are also on the chase. They come upon the truck after he hits a telephone pole. The baby is not in the truck.

A new video is released of the baby being stolen from the nursery by a woman that faces is hidden. The team is feeling upset and frustrated. Tim gets Lucy to go back to her rundown on their relationship to make her feel better. He then asks her about her plans to be undercover. He thinks she is sensitive.

She appreciates his honesty. She finally decides to tell him something she has been holding in. She has feelings for him. He is quiet. He then tries to explain herself for minutes until she starts laughing. He thought she was being serious. She could totally be undercover. He is annoyed.

Nolan and Harper head to meet a man whose wife is the suspect. He tells them he saw his wife with the baby and he couldn’t get her to stay. They lost their own daughter to SIDS. His wife has PPD. She turned down all treatment.

Angela and Jackson continue to patrol on the Amber Alert. Angela doesn’t even why to bring a kid into this world. Jackson tries to get her to understand these cases they see are outliers. Tim and Lucy spot the suspect’s car but she and the baby are nowhere to be seen.

They find the suspect on a bridge with the baby. She stands looking over the water. Nolan tries to talk to her. She talks but tells him to stay back. Angela steps in. She talks to her about giving birth and how far along she is. The suspect is asked to look at the baby. She admits that the baby is not hers. Her baby died. She hands over the baby to Angela. Nolan gets her to step down off the side of the bridge. Nolan’s teachers watch from the sidelines and continue to record.

At the end of the day, Nolan talks to his teacher about waiting before she publishes her police reform book. She needs to see more. Angela and Jackson end their day as he is no longer a rookie. Tim gives Lucy a card and she gives him a present that blows up white powder in his face, She meets up with Jackson. Nolan sees them, upset he isn’t moving on. Harper invites him ou =t for dinner with her daughter. She knows he feels bad.