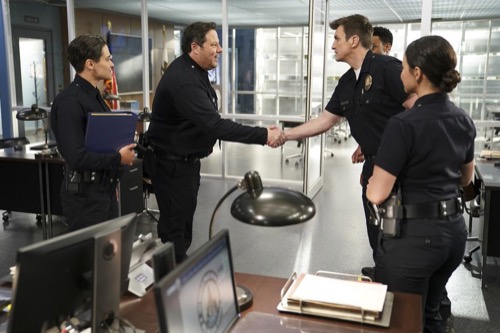 Officer Nolan volunteers to guard her house overnight. Meanwhile, Lucy notices that Tim is being much nicer to his new boot than he was with her and she does not like it.”

In tonight’s episode of The Rookie, the new recruits were in. With both Officer Chen and Officer West becoming P2, there were now two spots are and those spots were quickly filled tonight. The two new recruits were Katie Barnes and Larry the Badger. Larry never got to reveal his last name because he accidentally fired his weapon indoors.

Larry was an older recruit and he took inspiration from Nolan. But Larry wasn’t like Nolan. He started his first day by firing his weapon and so he was getting yelled at as Nolan was out on the street with his Training Officer. The recruits will be given their own TOs as well. Barnes was unfortunately assigned to Bradford and Chen found out about it. Chen offered Barnes some advice. She also told the other woman that she would be here anytime she needs to talk or is heading in a downward spiral.

Only Chen’s advice wasn’t needed. Barnes is a former military and she knows how to handle anything Bradford throws her way and so Bradford didn’t bother being a jerk to her. He instead treated Barnes like a person. He even let Barnes drive. Chen was eaten up with jealousy and she came to believe that Bradford was only being nice to mess with Barnes.

Chen said this with fondness, but West is her friend and he thought she shouldn’t be smiling at the idea of Barnes getting tortured. There was also no telling what happened to Badger. He could be stuck at the office or he could have surprisingly been assigned a TO. There was just no telling and Nolan had other things to worry about.

Nolan’s professor is being stalked. Someone broke into Professor Fiona Ryan’s car and so the officers stayed close to her as she went to go collect things from the car, only they noticed someone. This, someone, was taking pictures of Professor Ryan. The police detained him and they asked to see his camera. Ryan came upon them at that time. She told the police that they needed the warrant to check that man’s camera and she recognized the man.

He was a former student of hers. He sat in the front row for each class and he was always there when she had her office hours. Andy Becker was obsessed with Ryan. He even took her failing him as something flirtatious and that he had to up his game to woo her. Andy is clearly sick. He was warned to stay away from the professor and a restraining order will come into effect if he doesn’t.

There was later an armed burglary reported. Bradford and Barnes were the first on the scene and Barnes handled it as a servicewoman would. It was Bradford that reminded her that they have to start treatment on anyone they shot. Bradford walked her through what she had to do and later on they talked. He asked her to breathe in and then breathe out.

He reminded her that she’s on the homefront now and that not everyone they meet is going to be enemy combatants. Bradford knew what he was talking about it because it was once like that for him. He saw himself in Barnes and that’s why he’s taking it easy on her. He knows that she thinks the job is going to be easy because of her experience, but often experience works against you.

It was the same for any army personnel transitioning to become a police officer. Bradford worked with Barnes while his former protégé Chen was there for a young girl without a home. Chen had helped Tamara with the transitional housing paperwork and unfortunately, her new place has black mold. It was going to take two months before it was hospitable again. Tamara couldn’t go back to her cousin’s place because his girlfriend didn’t like her and Chen offered to put Tamara up while she waits for housing to come through. But unfortunately, someone posted Professor Ryan’s information online. They also encouraged people to go to her house and “teach” her a lesson. And so Nolan frequently checked up on her.

Nolan noticed that a lot of white supremacist groups were now targeting the professor. These people now know how to reach Professor Ryan and so Nolan stood guard outside of her house. He wanted to make sure she was safe. Which irritated Ryan at first, but she soon came to see that Nolan was just being a good guy and the two talked.

They talked about his son. His son Henry was in town for his new job at the nonprofit and Ryan told him about an incident when she was a kid. Professor Ryan was ten when police began knocking on doors and demanding everyone leave because they set off a bomb nearby and whole buildings were catching fire. Ryan became an activist after everything she saw as a kid.

Ryan wasn’t going to back down now. She continued with her podcasts and her book about better policing was going to be published. The next day, she was in her car and Nolan was following behind when he spotted two members of the Southern Front. These were the guys that almost killed his lieutenant last year. Nolan knew they were dangerous and he also knew that nowadays they like to kidnap people to put them on fake trials.

Nolan called Ryan. He told her to act like everything’s normal while he ran into one of the cars. Nolan played it as an accident while he grabbed one of their guns and he started firing at them while they fired back. The white supremacists wanted Ryan. They chased her as she tried to make a run for it on foot.

Nolan called for backup. He got help in taking down the men and they rescued Ryan while they were at it. Ryan was later assigned protection detail. She now doesn’t have to rely only on Nolan and so Nolan gave her advice. He told her to keep fighting the good fight. She went one way and Nolan returned to his house. He met up with his son Henry and Henry’s fiancé. And at first, things were going so well but then Henry collapsed and they had to rush him to the hospital.

Officer Barnes meanwhile chose to retire. She has never known a life outside of uniform and she realized she needs to find that before it’s too late. Bradford told her that his door was always open if she needed to talk.