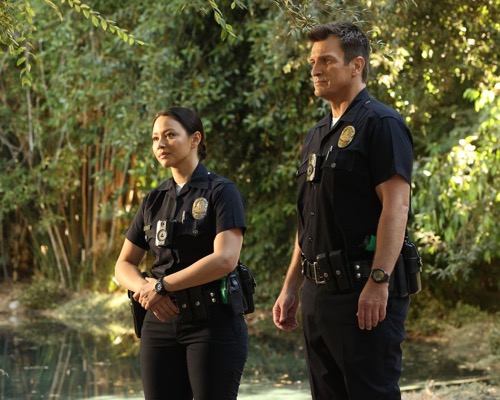 Tonight on ABC their new series The Rookie airs with an all-new Sunday, October 10, 2021, season 4 episode 3 called, “In The Line Of Fire,” and we have your The Rookie recap below. On tonight’s The Rookie season 4 episode 3 as per the ABC synopsis, “Officer Nolan and officer Chen report to a structure fire and suspect that there is more to the situation than meets the eye. Meanwhile, after witnessing a sniper shooting, the team searches for the shooter and discovers that the perpetrator has a connection to one of their own.”

In tonight’s The Rookie episode, Officers Nolan and Chen responded to a 911 call about a structural fire. The fire was at a home and they heard people still trapped inside and so they rushed in without protective gear to rescue someone. They were able to rescue one person. Only another person died. The fire was arson. It was created using an accelerant and the fact someone died then made this situation a homicide but Nolan got yelled at by his new girlfriend.

She was a firefighter and she told him he shouldn’t have gone into the fire. It wasn’t his job. He didn’t have the gear and so she warned him from making another stupid mistake. Nolan later followed up on the guy he saved. The guy woke up in the hospital and that meant he was free to answer questions. Or so they thought. It wasn’t until Nolan and Chen were questioning their survivor that they realized he was insane.

Their survivor was squatting at the building. He overheard two voices with one of them crying and the other yelling before the fire started and so the officers chose to follow up on the lead. They roped in a detective. They also discussed it with Sergeant Grey. Nolan overheard a private conversation between Grey and Bradford in which Grey told Bradford to assign a patrol officer as one of his aides.

Grey suggested Officer Chen. Nolan told Chen and so she was expecting the slight promotion when it ended up going to someone else. Bradford chose someone else. He was used to working with Chen and ordering Chen and yet he went with someone else. Someone he could talk sports with. Someone who would even be willing to get him tickets to the games he wanted.

Bradford was getting along great with his golfer. The two of them later stopped by the coffee stand that the other officers were drinking their coffee from and so Chen offered the guy (that Bradford chose over her) some advice. She told him that it would help him get along with Bradford. They were talking when the police officers overheard shots.

A sniper was shooting bullets from the top of a parking garage and all the officers at the scene responded to the crime. They all raced into the parking garage. They went to the top of the building only to find their sniper had escaped. He or she ziplined over the buildings to freedom. The police couldn’t go after them and so that was that. The shooter got away.

Just not before they finished they were clearly hired to do. The sniper killed an import/export guy named Michael Silver. He was shot in a moving car and was killed outright. His killer was an expert and an expert either wanted him dead or was hired. Grey put everyone on this case. Nolan and Chen were told to keep working on the arson case.

They found out the man who died was named Nelson. Nelson was an addict. Everyone believed he was at that house to get high and so speaking to his widow had cleared things up. His widow was also an addict. She said her husband has been clean for four years and that he would never fall off the wagon. She also said that it would be easy to dismiss his case as a junkie dying in an accident and so she asked them to do their best to investigate.

Nolan and Chen went to the Medical Examiner’s office. They found out their victim had been killed before the fire and that the fire had been set to cover up the murder. Nolan later babysat for Detective Lopez. He told her about his interesting case and she naturally became interested, but she was also on maternity leave. She had taken two months off to be with her baby and she hasn’t returned to work yet.

Neither has her husband. Wes hasn’t started working for the drug dealer. The same dealer he agreed to work for in exchange for getting information about a kidnapped Lopez. Wes got her and their son back after a daring rescue. Only now the drug dealer wants his legal representation. And he wasn’t afraid to threaten, lie, or cheat to force Wes into doing something against his conscience.

Wes was dealing with this newfound bit of trouble as date night went bust. He and Lopez were witnesses to Officer Harper’s date gone wrong. She accidentally invited two guys onto the same date and they both ended up leaving her. Lopez had needed to comfort her. Harper was later asked about her date by her new probie and she informed Thorsen what happened.

He told her that it might be a blessing in disguise. If she truly cared for one of them, she would have made a decision about which one she wanted to be with months ago and so Harper admitted she liked the freedom of it all. She now regrets her actions because she couldn’t help remembering the hurt on one of the guy’s faces. Later, the police officers were all informed about the new information on the sniper. They learned that the dead guy was in a conflict with Elijah Stone.

The same guy that was now threatening Wes’s family if he didn’t receive a lawyer on the take. It turns out Stone is a dangerous man and he might have killed a rival. The police officers followed up on any vet that had a connection with Stone in order to find their killer. They found him and then some. The guy tried to blow himself up when the cops came to arrest him. Nolan had to wrestle the grenade out of his hand and call in the bomb squad. The sniper now needed representation. Stone called in on Wes and Wes later went to represent the sniper.

Lopez meanwhile looked into Nolan’s case and she found two other cases matching the same MO. It seems they have a serial killer on their hands.

Thorsen also worked things out with James and James is willing to give Harper another chance.