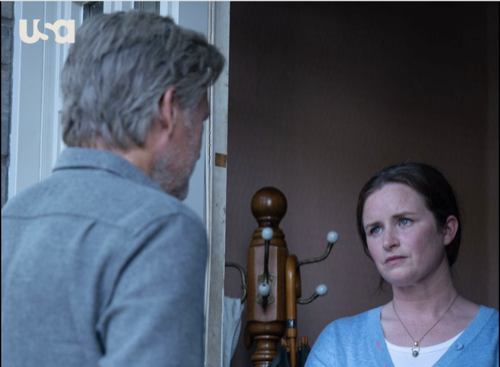 Tonight on the USA Network their new drama The Sinner premieres with an all-new Wednesday, October 27, 2021, and we have your The Sinner recap below. On tonight’s The Sinner season 4 episode 2 “Part III” as per the USA Network synopsis, “Ambrose heads to the mainland to learn more about Percy’s past and uncovers dark family secrets.”

Tonight’s The Sinner episode begins with Harry, he is outside Meg Muldoon’s house, waits for her to come out and follows her. She goes down to the dock and goes on the ferry to the mainland, Harry follows her onboard and watches her from a distance. Meg goes to see Neal who passes her an envelope stuffed with something. Meg then stops by a house to see Percy’s mother, when she leaves after asking if she had seen Percy, Harry knocks on the door and he and Percy’s mother, Risa, start talking.

She tells Harry that she was made out to be a dead beat mother. She and Sean had a summer fling, she was sixteen at the time and nothing she could do was good enough for Meg, and he will know her soon, Meg is a tyrant. She goes on to say that Percy tried to leave months ago, she visited her to get away, she didn’t know where else to go. We get a glimpse into Percy’s visit, Risa opened her house to her. Risa noticed that Percy had a big wad of cash, she thought they would talk about it the next day but when she got up, she was gone. Before Harry leaves, Risa gives him a postcard that Percy sent her.

Harry then goes to see Percy’s roommate, the address on the postcard. Caroline says it has been six months since Percy left, she just peaced out. Their living together was totally random, Craigs List. Caroline reveals different things about them living together, she basically says she was nice but sometimes weird. One night they went clubbing and Percy had coke on her, they used it together at the club. Caroline got Percy a job at a clothing store where she worked but after a month things got weird.

Percy ran up to Caroline one day and said that man can’t know she is there. Caroline didn’t know what she was taking about, and Percy was totally freaked out. After that she started spiralling, she wouldn’t leave the house. On a Friday night Caroline encourages Percy to go clubbing again and this time, she got them some coke. While dancing, Percy sees a hooded man, with blood on his hands, she leaves the club. Caroline sees her go and when she gets home, Percy is gone, the mirror is smashed in her room and she never saw her again.

Harry asks Caroline questions but doesn’t get much info, she just says that there was a dark side to Percy. Harry returns to the island and thinks back to the day when he first met Percy by the water. Then he imagines her on the ferry with her, she says he has seen too much now he is not going to stop. She tells hm that sometimes it is easier on everybody if you just disappear.

Harry goes to get the Sherrif, they go into the woods and Harry puts on glove and takes a closer look at the items on the log that look like some kind of ceremony was performed.

Harry goes back home to Sonya, he tells her that Meg lied to him and he would like to confront her. Afterwards they can go to dinner. They show up at the Muldoons house, Meg says everytime the phone rings or someone drops by she hopes it is news about Percy. Harry says they wanted to check in, he thought maybe something came up today. She invites them in, they are about to have dinner, she invite them to join and they can talk about Percy.

Harry tells the family at dinner that he went to see Risa who said Percy ran away a year ago to her. He says he also spoke to Caroline, Percy’s roommate on the mainland who thought Percy was trying to get away from something, she had an emotional breakdown and left the apartment in disrepair. Sean looks surprised, Colin is at dinner as well and he starts getting angry about the questions that Harry is asking. Meg says Percy wanted to come home and she went there with Colin and picked her up.

Sean wants to know why nobody told him, Colin says he was passed out in the woods, if life was fair he would be paying them alimony. Sean gets upset and leaves the table, and so does Colin, Meg says that about wraps up dinner. Harry asks Meg more questions and then tells her that she lied to him, Percy came to see her later the night she disappeared. Outside the house Sean and Colin get into a brawl. Meg tells Harry to leave.

A flashback to the night that Meg picked up Percy begging her to take her home. Meg takes her home and puts her to bed, when she goes to leave the room she hears Percy crying for someone to go away and leave her alone.

At his place, Harry apologizes to Sonya, she tells him that he was mean and cruel, he could have done it differently and he didn’t need to drag her into it. She thinks this case is bringing out a really ugly side of him.

Sean goes to see Harry, he says they lied, they saw Percy later that fateful Saturday night. Percy was upset about Sean’s drug use. He needed a fix, he took Percy’s car and went to Diez’s place that night, it wasn’t Percy. Harry asks if the man who was stalking Percy was Colin. He says Colin and Percy were always close.

A couple is digging for oysters down at the beach when further away from them we see a dead body of a woman, face down in the water.