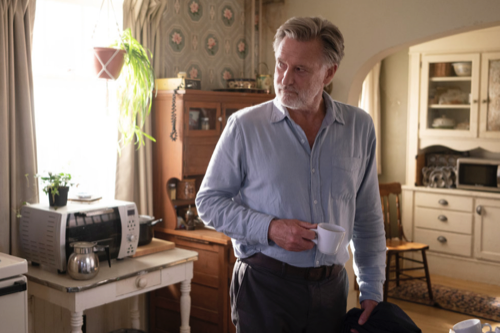 Tonight on the USA Network their new drama The Sinner premieres with an all-new Wednesday, November 3, 2021, and we have your The Sinner recap below. On tonight’s The Sinner season 4 episode 4 “Part IV” as per the USA Network synopsis, “When the Muldoons push to close the investigation, Ambrose refuses, pushing Sonya to the brink..”

Tonight’s The Sinner episode begins the discovery of Percy’s body. Harry is listening in on Colin in an AA meeting where he says he was close to Percy. Then Meg calls Harry and thanks him for meeting her, she says Percy didn’t do this by herself, someone is responsible for this.

She was devout and Meg is sure she would have went to her first. She thinks that someone had control over Percy, someone did this to. Harry asks if she knows who Valerie was, maybe one of Percy’s friends. Meg doesn’t know. She tells him that she needs his help. He says he has to leave, she asks him to stay just a few more days, he has done so much already, he says he can’t.

Harry meets Lou in a restaurant where he overhears TJ in the back upset about something. When TJ is putting out the trash, he tells Harry that someone broke into their kitchen last night. TJ says it is the Mudoons, they get away with everything. It is Colin, he is looking to get away with this. Mike, TJ’s father, says he saw Percy and Colin take his boat off the lot, just the two of them. He says there was something wrong with him and her. When Harry leaves, TJ’s father tells him that he knows he had feelings for her, but she was not who he thinks she was.

Sonya arrives home to find their place ransacked with the back door open. She looks on the floor and sees muddy footprints leading to Harry’s office and she is worried that someone is in there. Later, Harry arrives home and Sonya says she doesn’t like that there was an intruder in the house and she wants to be on the first ferry out of their in the morning.

In the morning, Harry and Sonya are at the ferry, and he asks her to give him a couple of days, he will wrap things up and go find her. He tells her that he can’t walk away from this. If he gets on the ferry, he says he will not be able to live with himself, it is just a few days. She says she doesn’t know if she can continue like this, he is always trying to make up for something. Sonya gives in and leaves.

Harry is near the church where Percy’s body is being carried out in a coffin. Lou sees Harry and says he is surprised to still see him there. The funeral being over, Harry attends the wake.

Harry goes to speak to Sean who tells him that he is the only innocent person in the house, because looking the other way makes you guilty. Meg sees Harry and she is glad he stayed, she pours him a drink. He tells her that last night someone broke into his place, they looked through his stuff, wanted to see what he found out. Meg asks if he knows who it could be.

He asks her if Colin visited her in Portland, she says no, Colin would have told her. Harry says it seems like Colin and Percy were close, she says yes, he was a better father to her than her own dad was. She asks him what he is implying, and then says Colin would never. Then she tells him that whatever he finds, she would appreciate that he come to her first.

It’s dark outside, Harry heads back to the dock and looks around Colin’s boat. He finds a flare gun, then he hears something, the boat is moving. The boat stops and Colin is there, he asks him if he is searching the boat, Harry says that he wants the whole picture. Colin then asks why Harry mentioned Valerie to his mother, Harry says Percy had a star with her when she died and the name Valerie was carved in it, so it must have been pretty important to her.

Colin claims her doesn’t know anything about that. Harry says Percy looked up to him and wouldn’t turn him down for anything, until she returned from Portland. Harry tells him that maybe he loved Percy a little too much. Colin gets mad and pushes Harry in the chest. Colin claims that he was helping her.

We get a look back at Colin making Percy read a book about prayer, she says it seems hypocritical. He guilts her into continuing to read.

Colin tells Harry that he thought he could reach Percy, but someone got to her first. Once he found her outside walking and wet, he brought her inside and warmed her up, he says he didn’t realize it then, but she was already gone. Colin shows Harry pictures that Percy drew, he says someone poisoned her mind and it wasn’t him. Harry says. Colin’s problem is that he couldn’t share Percy with anyone else, he pushes Harry overboard.

Harry survives getting pushed overboard. He dries up and then tries to replicate the drawings that Colin showed him. Percy’s ghost is sitting with him, she still haunts him. Harry comes up with some clues that lead him to Bazegw Point. Once there, he finds more random small items placed throughout. There is also some sort of structure, with candles, bone fragments, bird feathers and the circle that Percy drew is there. He finds a drawing rolled up, looks like a picture death coming after a woman, on the back it is written P. Muldoon.