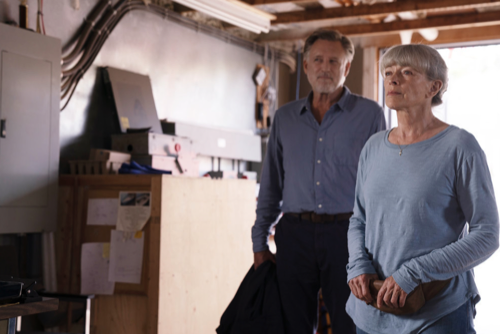 Tonight on the USA Network their new drama The Sinner premieres with an all-new Wednesday, November 10, 2021, and we have your The Sinner recap below. On tonight’s The Sinner season 4 episode 5 “Part V” as per the USA Network synopsis, “Ambrose discovers the source of Percy’s ritualistic practises and dives deeper into her past.”

Tonight’s Sinner episode begins with Harry is still looking into the ritualistic practices that Percy participated in. He goes down to the dock and finds Meg there smoking. He tells her that he found a family boat crest at one of the ritual sites, she doesn’t recognize it. He says he is going to track it down, she says she is going with him.

In the office, Mike is talking to Patrick when Meg and Harry come in, Mike leaves and Meg shows Patrick the picture of the crest. He says no and they continue to talk when Harry notices over by the desk a snake with its tail in its mouth forming a circle like the one at the ritual site. Harry asks Patrick about Emiliana, the other harbor master, Patrick says she is off and Harry notices a bottle of her pills on the desk, he eyes her home address. Harry leaves Meg with Patrick and says goodbye. Once in his truck, he heads to Emiliana’s home. Nobody is home, so he forces the door open and looks around inside. He finds engraved on the desk, “free the bone from the flesh” written.

Harry returns to his place and once there, he notices something amiss in his office. He grabs a knife from the counter and finds Emiliana in his home. He asks her why she is hiding his relationship with Percy. She says she thought they were playing a game, breaking into each other’s houses. He says he found her notes on Percy, she says she is not the person he is looking for and if he goes to her house again she will shoot him. He tells her that at the hut he found blood on the rocks, the chief is going to run forensics to see if it is Percy’s blood, it will take four or five days. He tells her that this is her chance to set him straight. She sits down and says she always saw her far down on the dock, she was twenty-five and loved to bring in charge.

At least that is how she saw her. She agrees something changed, she became a totally different person, drinking and probably drugs. She became withdrawn and then she was gone. She left the island, a few months went by, and when she returned she was worse, a shell of who she had been. She often saw her sitting down near the dock alone. One day, Percy approached her, they began talking about their families. Percy told her that she didn’t sleep in two years and wants to learn what she does, she saw her kneeling with a mineral in her hand. They go out walking in the woods and they feel a tree, Emiliana tells her to feel the tree’s pulse, stay with it. Percy says she feels stupid, it’s a dead tree. They continue, Emiliana teaching her, and Percy finally gets it and starts to cry.

They worked together for a couple of months, they weren’t friends exactly, there was something in her that she wanted to exercise and she wanted her help. Percy latched on to free the bone from the flesh. She tells Harry that the only way she can trust him is if he does the things Percy did, he agrees to do it.

They go down to the water and she tells Harry to walk in, it is 42 degrees and he is going to feel like he can’t breathe, he can’t fight it and has to completely submerge himself, a lot of people give up at this point, he plunges under the water. When he is out, she puts her hand on his chest and says that is his pride, he lets his ego control him, he is not ready. She keeps telling him to go back in until he is ready.

She then reveals to Harry that Percy told her that she slept at CJ’s house one night and his mother caught them, she was furious and threw her out. She also revealed that leaving Clark Harbour would make dad worse, but she wanted to go anyway – she found him one night in the garage, a belt strapped to his arm and shooting up. They avoided each other for a few days until he sought her out.

He says he was on the office computer, he noticed that she is looking for apartments in Portland. She says she does it when she is bored, daydreams. She says she could leave grams, him, Colin, and the business. He tells her to take care of herself and hands her a package filled with money to put a deposit on a place in Portland. He asks her to let him do this one thing for her, just go and don’t tell grams, just do it. She says it was her fault, that night, if he hadn’t gotten hurt, he wouldn’t have needed those pills.

We see Percy in the ritual hit with Emiliana, then at home with Meg who tells her that she is back where she is supposed to be. They get into an argument and Meg basically tells her that she is ungrateful for what she has, she rides on the backs of her family and the family business. Emiliana tells Harry that Meg was never going to let her go.

We see Percy going to see Colin, she says she is sorry, she appreciates what he has tried to do for her. Committing to the church has worked for him, but it never worked for her. He tells her that she never tried. She says it is because she doesn’t see the world the same as him, it is not black and white. He tells her to clean up her shit and grow up.

Percy then thinks back to someone dying, we see someone wearing a hoodie, their face covered, then we see a scuffle on a boat, then Percy kneeling over someone’s body. Percy loses it and runs from the hut. Emiliana says Percy told her she was responsible for someone’s death, she didn’t say who. There is a talisman amongst Percy’s possessions that resembles the person who died, on it, Percy wrote “do you think you can push someone to suicide.”

Percy haunts Harry’s mind, she tells him that if he doesn’t stop he is going to do what she did. He confesses to her that he killed a man that he didn’t have to.

The next day Harry calls Sonya, she tells him when the place got broken into they did take something, some photos. She says she backed them out on the cloud, she can send them to him to see if they help him. Harry gets the photos and looks them over, just then Meg drops by and tells him that he has been lying to him, he met with the witch woman. He says Percy went to her for help. He asks her if she knew about the guilt Percy was carrying around, for some reason, she felt responsible for someone’s death. Meg tells him that the nut job is taking him down the wrong road. Harry shows her the pictures, in one of them, there is Brandon’s boat hauling another boat.

Meg and Harry go down to the dock, she tells her that she hasn’t been completely honest with him. Brandon’s boat comes in and there is nobody behind the wheel, it was on autopilot to return to the dock. They hoist up the net and Brandon is tangled in it by his foot he is dead.