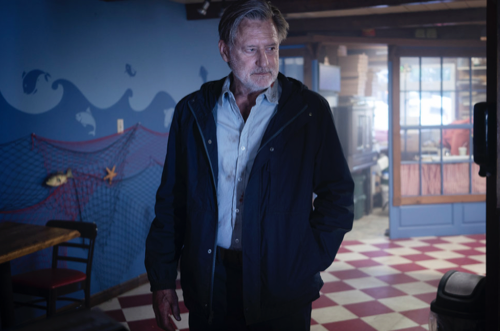 Tonight on the USA Network their new drama The Sinner premieres with an all-new Wednesday, November 24, 2021, and we have your The Sinner recap below. On tonight’s The Sinner season 4 episode 7 “Part VII” as per the USA Network synopsis, “Unsure whom to trust, Ambrose hunts down his pursuers.”

Tonight’s Sinner episode begins with Harry and Meg, she is tending to the would on his side. She calls Sean to get a bandage. Meg asks who were those guys, he says he was going to ask the same thing of her. Meg’s phone wings, it is Colin, Harry asks her not to pick it up. Sean asks what the heck is going on, Meg tells him to leave them. Meg tells Harry the men he has to look into are not her Colin and her Sean. She asks him what his plan is, he says he is not sure. She throws him a set of keys and gives him a gun to protect himself – she tells him that she didn’t have to save him, she wanted to.

Harry leaves Meg’s house, he gets into the truck she loaned him and leaves. Sean tells her there is something that she needs to know.

Harry goes to the station and tells the sherriff what happened to him, Harry says it was too dark he didn’t get a look at anyone. Harry then asks about Don Linear, the sherrif says he is not a criminal, he just runs the church boat race. The sherrif wants to get detective Brooks in on it, Harry doesn’t want it, he says these people cover their tracks, they can’t get too many people in on it. The sheriff tells him that they have DNA, Michael Lam killed Brandon. He isnt’ supposed to talk about it, it is classified. They found DNA all over Brandon’s lobster gloves. Harry says he wasn’t wearing gloves and there were none in the boat. One of Portland’s guys found the gloves. Harry wants nothing to with detective Brooks and he doesn’t want to talk anymore, he leaves.

Harry goes to the Golden Fish restaurant and hears CJ yelling at someone. Harry says Portland is building up a false case against Michael. His wife, Stephanie, says Michael was checking on traps, he saw Brandon in the boat with people. A group of people moved from Brandon’s boat to the other boat, men and women. The boats split up after that, Harry thinks it is human trafficking. Stephanie says CJ’s uncle needed papers before he went north, he went to a bouy shop to get them.

Harry goes to the shop and finds it is vacant, he goes over to the computer and starts to snoop around. A guy enters the shop and Harry pulls the gun on him, he tells him there is a folder called transport on the computer, it is locked, he wants him to open it. Inside the holder are photos of people. Harry says he knows he has a side business of making Canadian id’s. Apparently Percy had something on him, she told the guy that she new he made the id’s and she knew they hid the people in the boat yard. He told him that he knew nothing about how everything worked, Brandon did everything.

Percy was mad because a woman paid ten thousand dollars and was promised a job, her brother in Portland can’t find her. Percy wanted to know who picked up the people, but the guy wouldn’t tell her. He says he puts the id’s on the deck after sundown, next morning they are gone, that is all he knew. The guy tells the same story to Harry, and says he is not saying anything else, they will come after him and he has kids. Harry promises that he will get to them first. The man identifies the boat, has a black stripe on it, it’s old with a high end motor in it.

Harry gets help finding the boat, it belongs to Vern Novak, 52 years old and lives at Goose Rock, private territory. Harry grabs the keys to boat out in the water and leaves. He arrives at Goose Rock and starts to look around. He is about to call Sonya when Percy’s ghost tells him that calling her will only scare her. Harry remembers a conversation he had with Meg, she asked him to go to her first, no matter what he finds.

Harry sneaks into a house and pulls a gun on Novak inside who says Meg told him he would be coming. He asks him what he has going on with Meg,. Harry asks if Percy got in his way and he got rid of her. Harry calls the sherrif, he tells him that a man has been shot, he better get there right away, at Good Rock. Novak tells Harry the police are not going to do him any good, Percy called the police the night she jumped and they saw how good that went for her. The police arrive at Goose Rock, Harry is arrested, he says that he got Brandon’s killer.

At the station, Harry says that the gun that Novak owns, the bullet matches the one that was in Brandon’s head, he is the killer, not Michael Lam. Harry says Novak has an operation, Brandon got a little greedy and wanted to work around Novak. Harry says the human trafficking has been going on a long time, it is really strange that nobody noticed. The sherrif asks for time along with Harry.

When alone, he tells Harry to stop, nobody is planting evidence here, it doesn’t make any sense and he is forcing his hand. Harry wants to know who was on duty the night Percy died. He tells Harry to get a lawyer. Harry is left alone and he sees some evidence bags, one has Novak’s cell phone, he puts it in his pocket without anyone noticing and sneaks out. Outside, Harry goes through the phone and he starts to go through it. Inside the station they notice Harry is gone and run out to look for him. Harry calls one of the numbers on Novak’s phone, it belongs to one of the deputies, Josh.

We go back to the night when Percy went by the station, she asks Josh to call Lou and he asks her what it is about. She says she thinks people are being trafficked. They are brought to Canada for jobs illegally, one woman is missing and she thinks people at Clark Harbour are involved. She whispers to him that one of them is Brandon, and there are probably others. He acts surprised and says let him call Lou.

Harry goes back to Meg’s house, he tells her that he saw her boat when she was at Novak’s place today, she has been stringing him along all this time. She says he doesn’t understand, she just met Novak today, she didn’t know him before, she didn’t know anything at all, until today. He asks her if her sons finally let her know about the family secret. He tells her that she asked him to do this, is she going to turn her back on Percy to save her sons. He says Colin and Sean are in deep with this racket, Percy fond out, who was she supposed to turn to, it could have drove her to do what she did and there is more than just her blood on their hands. He says someone else died, who was it, make it right for Percy. She tells him that he is not safe there if he stays.