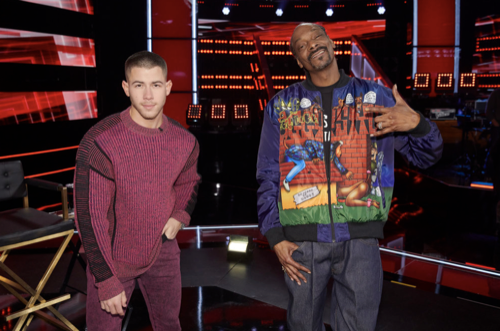 Then they select a winner to move on to the Live Playoffs; each coach has one steal. The four artists saved during the Battle Rounds will compete in the Four-Way Knockout.”

The episode begins with Snoop Dog, he is the mega mentor and will be working with team Nick first this evening. Snoop brought Nick a jacket, Nick jokingly says that he knew he was Snoop’s favorite Jonas brother. The first pairing is Zae Romeo and Rachel Mac, two of Nick’s youngest and favorites. Rachel will be performing, “Foolish Games,” by Jewel and Zae will be performing, “Electric Love,” by Borns.

Coaches Comments: John: “Rachel when you were hitting those high notes it was really gorgeous. I find your bravado so interesting, it is such a part of your vocal personality. Zae, I felt it and I loved the way you were doing that little step, it was energy that was appropriate for that song – you were showing more of who you are. I would side with Zae on this one.” Kelly: “Rachel, your tone is incredible, I cannot believe that your are sixteen, its outrageous. Like John said, your bravado is really beautiful and slow, you just need to learn how to breathe to get a little more air, job well done. Zae, you lose yourself in the song and I have never heard that song. I thought it was incredible and that is why I am picking you this round.” Blake: “I am interested in what Nick is going to do here, on one hand he has Zae who was a four chair turn and you kind of set the bar when that happens. Rachel, a one button artist, when they excel like she is, we see this growth happen and every time it is OMG and Nick is putting coaching into motion with you.” Nick: “Zae, you sand the best I have ever see you sing, you come ready for game time and put on a show. Rachel, you are growing every time we work together and why we love this job so much.” The winner of this knockout is Rachel.

Kelly uses her one steal for Zae, she says he gave her goosebumps the whole performance.

Team Kelly is next with Snoop Dog, Avery Roberson, and Kenzie Wheeler are chosen to battle it out against each other. Both are four chair turns and fill the lane of country music that Kelly loves. She stole Avery, Snoop says he must be a treat if she stole him. Avery is performing “Tomorrow” by Chris Young and Kenzie is performing “Beer Never Broke My Heart,” by Luke Coombs. Snoop says he’s not a beer drinker but after that, he feels like getting a beer. Snoop calls the two are young and fresh.

Coaches Comments: Blake: “Kenzie you are probably going to win this show. You are the real deal, you are a talented SOB. Avery, every time you get up on stage it seems like you are a little more comfortable, you are starting to let your voice do what it does which is really incredible. I would probably go with Kenzie, even though my man is standing there. What a shame it that Kelly blocked me and I didn’t get my chance.” Nick: “Avery, this was your best performance yet. The emotional texture in your performance and the fact that you tied it to something real was really strong to me. Kenzie, you brought the party. I think you have a great coach, you have a shot to win this thing, the country is going to love you. For me, I would go with Avery.” John: “Avery, I feel like there is another level to you that you are holding back. If you are able to come back convey a little more passionately on stage and you are going to be a force to be reckoned with. Kenzie, you are a star, your voice has depth and range and presence, people want to hang out with you and have the Kenzie experience.” Kelly: “Avery I love how you choose really intimate songs and there is a line for exactly what you are doing, but I don’t think you know how good you are, you did a really beautiful job. Kenzie, I watched you sing this song in rehearsal and I thought, oh no he is a real Blake fan. You are captivating and have a natural draw for people to want to be around you or have a beer with you.”

The winner of this knockout is Kenzie.

Team John is next with Snoop Dog mentoring in and the next two to battle it out are from Detroit are, Rio Doyle who is the youngest artist on the team and Zania Alaké is a strait up soul singer. Rio is performing “Issues,” by Julia Michaels and Zania is performing, “If I Were Your Woman,” by Gladys Night & The Pips.

Coaches Comments: Kelly: “Zania you just sang a word out of that song that I shouldn’t say on this show. I feel like it was on your record. I could tell you have been there, I loved it and now I have to cover it. I think you did a really good job Rio. Sometimes it’s the song and the moment, I pick you Zania.” Blake: “Rio, I have seen people try to do that song on the show and I don’t think I have ever seen it done that well, it is in a very specific pocket and I think you did a really good job. The truth is, it is good timing Zania to have a moment like you just had because the next time we see you America is going to be voting and say OMG.” Nick: “Rio, have you ever done any acting? (yes, since she was five) You approached this song with a storyteller mentality, to be sixteen and have the vocal material you have, which really impresses me. Zania, you just had a special moment on this show, I don’t know what your story is, you connected with everyone here and you are certainly one to watch.” John: “You both made me so proud. Rio, you stole that song, everything about you is so credible given the fact that you are a kid, I am so proud. Zania, Snoop is going to be so proud, you sang that. Who knew vocal coaching from Snoop Dog was the thing.”

The winner of this knockout is Zania.

Team Blake is up next with Snoop Dog who loves working with Blake and calls it a buddy, buddy relationship. Cam Anthony and Connor Christian will be battling it out together in this knockout. Cam is singing, “Youngblood,” by 5 Seconds of Summer and Cam is singing, “Feeling Good,” by Nina Simone.

Coaches Comments: Nick: “Connor I always love your tone and I love your vibe, the intensity when you perform and it lends yourself really well to being a lead singer to a band. This song was a good choice, it showed what you can do in that pop-rock setting and you should be really proud. Cam, you just did your thing. It was flawless and creative and kind of bizarre. You tapped into something that was worldly.” John: “Cam, the principal emotion I felt with this is deep-seated hatred towards Nick Jonas for depriving me of the opportunity to work with you. I just sang that song at a pretty big moment in my life at the inauguration and what I loved from your performance is that there were things that I was jealous of that you did, that I would never have thought to do. I really believe in you and think you have the ability to be a true artist beyond this show, beyond anything. Connor, I really liked your tone, your energy is contagious, you just have a lot of fire. This wasn’t your best vocal work today but I really think you have something special.” Kelly: “Connor I think your tone is really special. The reason you made it this far is because you are talented. Cam, you came out here and your choice in starting with acapella, that was really smart and competitive. You are really special and did a really good job.” Blake: “Connor the way you kind of create your sound and tone, you have to use a lot of air and keeps you this much under the note sometimes. Cam, you always figure out how to tape in, you are the king of the mountain and I am glad for you.”

The winner of this knockout is Cam.

As the night continued, team Nick gave it their all – Raine Stern Vs. Jose Figueroa Jr. Raine sang, “No Such Thing,” by John Mayer and Jose sang, “Break Every Chain,” by Tasha Cobbs, with Jose winning the knockout.

Team Kelly is next and Ghianna Zoe will battle against Anna Grace Felton. Ghianna is singing, “Glitter In The Air,” by Pink and Anna is singing, “If I Die, Young,” by The Band Perry. Snoop Dog is really touched by Anna’s performance but he wants to feel it more and tells her to let it go.

Coaches Comments: Blake: “Anna, people like you are important to have on this show, you are so different, what a cool voice you have. Ghianna we have never had anyone on the show like you and the sky is the limit for you.” Nick: “Anna, I always loved that song, and to make it your own, I thought was the right move. Ghianna there is something unique about you and you show up each week with something different. I have to go with Ghianna.” John: “I love how much personality you both have, you both perform very confidently. Anna when you did the falsetto, it was so pretty I had chills. Ghianna I had to keep reminding myself that you were seventeen.” Kelly: “I actually believe you are both powerful in different ways. Anna, you have such a gift, and Ghianna you have such a presence.”

The winner of this knockout is Ghianna.

Blake uses his steel for Anna, he thinks she has a wide-open lane on his team that is full of dudes.

Team Nick is next with Devan Blake Jones vs Savanna Woods vs Emma Caroline vs Carolina Rial, in a four-way knockout. Snoop tells Devan that he has to give it some body language this is his house, he has to command it. Savannah has an edge, Kelly saved her. Emma is an incredible vocalist who needs to loosen up on stage. Carolina has a lot of power in her voice and John wants her to dazzle. Devan is singing, “Sign of the Times,” by Harry Stiles, Savanna is singing, “Black Hole Sun,” by Soundgarden, Emma is singing, “Neon Moon,” by Brooks & Dunn, Carolina is singing, “Anyone,” by Demi Lovato.

Coaches Comments: Blake: “Emma I couldn’t be happier with your performance tonight, I need you on my team.” Nick: “We talked a lot in our rehearsal Devan with Snoop that you had to come out of your shell and you did.” John: “Carolina that was wonderful, I felt all the emotion.” Kelly: “Savannah you are insane, your range and you are rock & roll. Please America vote for Savannah.”

It is all up to America on who will win the four-way knockout.