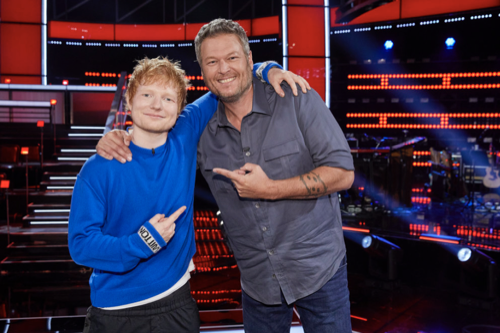 The coaches, who each have one steal, pair their artists to perform individually against a teammate, then select a winner to move on to the Live Playoffs.”

The show was celebrating its five hundredth episode tonight. It was, therefore, a special night and so, of course, they had cake. The cake was amazing. The judges couldn’t cut into yet because they still had a show to do and up first for tonight’s Knockout Round was Team John. There was one mentor for all the teams and to everyone’s surprise, it was Ed Sheeran. Ed Sheeran is amazing. He was also kind to the contestants and he did his best to help them. The first knockout round was between BrittanyBree and Samuel Harness. The two of them chose very different songs and they themselves have such different sounds that it was a tough round. John had a hard time deciding who won. Brittany Bree performed the song “Best Part” and Samuel performed “Bruises”.

They both selected their songs based on their life experiences. Samuel chose his song because he was adopted and he had met his birth mother and he had found out that giving him up had been a painful choice, but it was done because his mother wanted to give him the best life she could. Samuel got emotional as he was performing. He had tears in his eyes and he needed a minute to blink them away. Samuel’s moment on stage was just so significant that the other judges named him as the winner. John had to follow their lead on this one. He named Samuel the winner. He also eliminated BrittanyBree. None of the other judges chose to Steal her and so this was her final night in the competition.

Up next was Team Kelly. The second Knockout Round of the night was between the Hailey Mia and the Cunningham Sisters. They were the youngsters of Kelly’s group. One chose a heartbreak song and she did let her nerves get in the way during practice. The other chose a church song and they weren’t connected to it. They chose it to honor their foster siblings who joined their family after their mother died and, while that was a great reason, the sisters started singing off the song with no actual connection to it. Ed Sheeran knew how nervous all the girls were. He played them a video of himself when he was their age and he had been a terrible singer. He grew into his talent. He naturally believe the girls would all grow into theirs as well.

In the end, all three girls sang beautifully. Hailey performed “Arcade”. It was a song she found even before it became popular and she loves it and so she did do great justice to the song. The Cunningham sisters performed “Oceans (Where Feet May Fail)”. Both performances were great. Kelly enjoyed both of them and so did the judges. But Kelly named Hailey the winner. She said Hailey really came alive with her performance and the Cunninghams were unfortunately eliminated. The judges were really holding onto their Steals. John had said he wanted to use his on the one person who spoke to his soul and so who knows when that will happen. Next up was Team Ariana. She paired off David Vogel and Ryleigh Plank.

Ryleigh Plank chose “Midnight Sky”. She was a huge fan of Miley Cyrus because she saw herself in that artist and she knows what it’s like to be ridiculed for being different. David meanwhile went a different route. He chose to show off a side he hasn’t shown before. He performed “Lose You to Love Me”. He performed the song with just his guitar and he instantly won over Ed Sheeran who became a big fan of his because of the strip down performance. Both Ryleigh and David shined in their way. The judges were split on who won. They would choose David for the performance tonight and they would choose Ryleigh based on all of her performances put together. Ariana named Ryleigh the winner. She said she had to go with Ryleigh because Ryleigh has it in her to win.

And so Ariana cut David from her team but John chose to use his one Steal to save David. David is now on Team John and even Ariana thanked him for it because she hadn’t wanted David to go.