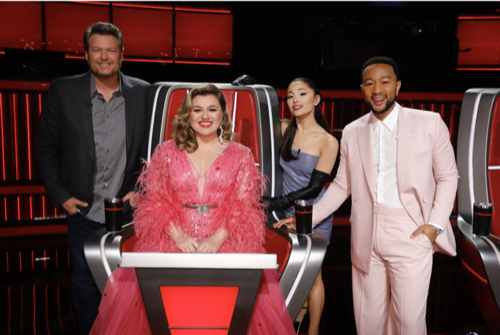 Tonight on NBC’s Emmy Award-winning musical competition The Voice airs with an all-new Tuesday, November 23, 2021, season 21 episode 20 “Live Top 11 Eliminations,” and we have your The Voice recap right below. On tonight’s The Voice season 21 episode 20 “The Top 9 highest artists are revealed as safe by America’s votes while the bottom two compete in the Instant Save. Ariana Grande and Blake Shelton perform with their individual teams.”

In tonight’s The Voice episode, with little time to waste the Top 11 singers come to the stage. America saved Joshua from Team Legend, Hailey from Team Kelly. The crowd goes wild. Ariana takes the stage with her team to perform.

A clip of Ariana and Blake is shown. The two are on the recording lot. She teases him about his truck being so big and how he drives. He lets her drive. She can hardly reach the pedals.

On to more results. The remaining 9 take the stage again. America saved from Team Blake….Paris. From Team Ariana Holly has also been saved.

The remaining 7 artists come back to the stage. The next 3 who have been saved are Wendy, Girl Named Todd, and Hannah.

Blake takes the stage and sings with his team. Wendy takes a fall and is helped off stage. They take a quick minute. Carson brings out the last 5 artists. Two will be save and two will perform. Jerry from Team Kelly and Jermicka from Team Legend has been saved.

Wendy comes back out on stage. She is ok, she tells the audience. Just some bruises but all is good. Gymani takes the stage to sing. John thinks she did great. Jim & Sasha come out to sing for a save. The Voice instant save starts right now. All three give their thanks to the judges.

Jim and Sasha have been saved! Gymani says goodbye.